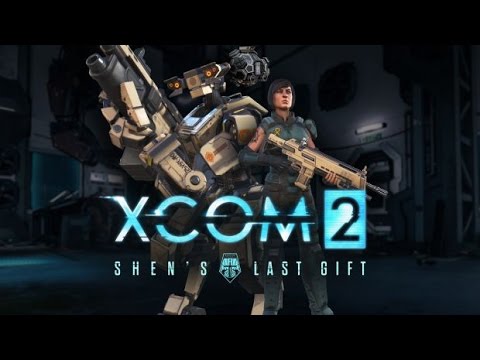 When a mysterious message comes in to Chief Engineer Lily Shen’s lab, the XCOM team is off to the races once again to find the source. The message is from her father, the now-deceased Chief Engineer Dr. Raymond Shen. Dr. Shen was responsible for much of the technological advancements in XCOM: Enemy Unknown/Within, including the incredibly powerful MEC suits. Reaching from beyond the grave, could this spell the return of giant overpowering robots to help turn the tide of the alien threat? I’m happy to say hell yes it does, and of the three official expansion packs, Shen’s Gift is easily the best of them all.

Like the first mission for Alien Hunters where you got the opportunity to take CO Bradford into the field, Shen’s Gift gets Lily out of the lab and right in the thick of things. Answering the call, she finds that all is not as it seems. Stumbling on a fully operational prototype with the designation SPARK-001, Lily is able to re-activate the dormant robot with her hand print. More than just a MEC suit, SPARK is a fully sentient member of the team.

Lily is ready to kick some tail!

SPARK-001 looks like what would happen if Johnny 5 from the movie Short Circuit got tired of dealing with the likes of Steve Gutenberg and decided to hit the robo-gym. Thankfully, you aren’t stuck with the roided-out Johnny-5 look as there are several armor variants, including several heads, and two sets of default legs and arms. You can also upgrade, rename, and add props to SPARK, just like any other squaddie, which is appropriate — SPARK is a fully functional member of your team.

Also like the movie Short Circuit, you can build multiple SPARK units, fielding Johnny-1, 2, 3, and so on, if you are so inclined. SPARK has a Gremlin called “Bit” that allows players to equip several heavy weapons, as well as basic hacking. In this way, SPARK is a bit of a cross between a Specialist and a Grenadier. Also like those classes, SPARK will earn experience and can level up. There are seven levels of upgrades with binary choices at each level, just like any soldier in your squad. Given that you can field as many as you have available slots, you can customize a bit between them by making complementary choices, but in practice I still found that one SPARK in the field was usually more than enough.

Modded up and ready to deploy, Commander.

I was happy to see that Shen’s Last Gift triggers fairly early in the mission pool. It means you will get a fledgling SPARK to build alongside your team’s normal path of upgrades. Sure, it still requires investment of already-finite resources, but much like the MEC, it’s just another path of the many available. It also means that SPARK is seamlessly sewn in in terms of power. He isn’t overpowered when you get him, and his power grows so he isn’t overpowered in the end game. It isn’t often that DLC content is this well integrated and balanced. It also means you’ll have a more sporting chance against the devastating Muton Berserker Queen if you happened to have picked up the highly-recommended Alien Hunters DLC.

SPARK units will upgrade just like a soldier would. They aren’t just suits for your troops.

It’s very clear that Firaxis saved the best for last with Shen’s Last Gift. While fans are turning out very high quality mods, there is a level of quality here that is a step above the rest. With perfect integration with the campaign at large, this final expansion in XCOM 2’s Season Pass brings it all together in a way that unites old and new. I simply cannot recommend it enough.   While you wait for the download, check out the launch trailer.    See you on the battlefield, Commander.

Ron Burke is the Editor in Chief for Gaming Trend. Currently living in Fort Worth, Texas, Ron is an old-school gamer who enjoys CRPGs, action/adventure, platformers, music games, and has recently gotten into tabletop gaming. Ron is also a fourth degree black belt, with a Master's rank in Matsumura Seito Shōrin-ryū, Moo Duk Kwan Tang Soo Do, Universal Tang Soo Do Alliance, and International Tang Soo Do Federation. He also holds ranks in several other styles in his search to be a well-rounded fighter. Ron has been married to Gaming Trend Editor, Laura Burke, for 21 years. They have three dogs - Pazuzu (Irish Terrier), Atë, and Calliope (both Australian Kelpie/Pit Bull mixes).
Related Articles: XCOM 2 Shen's Last Gift
Share
Tweet
Share
Submit