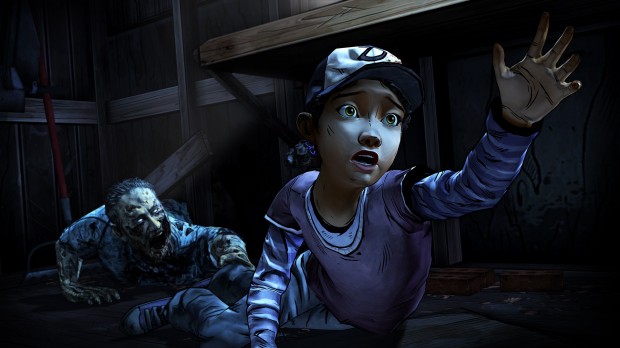 Telltale’s The Walking Dead surprised everyone in 2012 with a story that was as engaging as it was harrowing. The episodic adventure series consistently put the player in uneasy situations, and demanded quick decisions where there was often no “good” choice to go with. Its emotional conclusion sent ripples throughout the industry, and we have been on pins and needles for the debut of Season Two ever since. Now that the first episode of the new season is upon us, we finally have a chance to pick up where we left off.

Caution — if you have not played the first season of The Walking Dead, it is impossible to discuss the new one without massively spoiling the original. Read on at your own risk.

Titled All That Remains, the first episode of the new season picks up rather close to where the first left off: Lee Everett — the previous season’s main protagonist — has died, and the player assumes the control of Clementine, the young girl for whom Everett had served as the surrogate father during the time of crisis.

One of the hooks from Season One was the fact that decisions that were made were carried from one episode to the next — each player’s experience may not match that of others. You’ll notice early on that Season Two operates likewise, as you’re given the opportunity to load a savegame from the first season so that your personal version of the narrative is intact. It’s unclear how this affects the story in Season Two just yet, as this first episode appears to introduce new story elements at every turn.

Such new elements are… disturbing. The relentless emotional assault of the series is back in full force in All That Remains, introducing tragedy within minutes. Telltale wastes no time in reminding you that this apocalyptic world is in complete disarray, and that you’re in constant danger — not just of zombie attacks, but of interference from other people who are trying to get by in whatever way they can.

Loneliness is the predominant theme of this episode. Assuming the role of Clementine feels quite different than that of Lee Everett. She is much smaller, weaker, and less experienced than last season’s main character, with a whole lot of learning to do in a very short time if she is to survive. The game does a fantastic job of making you feel Clementine’s struggles with learning to adapt — and certain situations give you ample opportunity to shape her attitude as challenges arise. And the challenges do indeed arise; this may be only the first episode, but it’s littered with agonizing, cringe-worthy moments.

From a mechanical perspective, the form and function of this episode are nearly identical to those of the previous releases. Gameplay consists primarily of walking around and interacting with key items. Action sequences consist of quick time events that keep you on your toes and force crucial decisions to be made with haste. Conversation choices play a major role in crafting the narrative, with an important aspect being the provided time limit — if you want to say something, you’ll need to say it quickly or choose by default to remain silent, which is a response in itself. The pleasing comic book aesthetic is intact as well.

Very few changes were made to the UI and the visual presentation, which isn’t a bad thing — such aspects served their purposes to great effect already and didn’t require much reworking. As with the previous season, though, it’s strongly advised to change the UI setting to “minimal” in the options menu to prevent the distracting “[character] will remember that” prompt during a conversation. It’s quite immersion-breaking to see that appear and be forced to assume that the rest of such a discussion was ultimately inconsequential.

The two-hour All That Remains episode sets us off on another gripping ride through Telltale’s version of The Walking Dead. You’ll say goodbye to old characters and welcome new ones. Your struggle for survival will take on new and agonizing forms (I wish I could wipe my memory of one such encounter with man’s best friend). And with Clementine, you have a brand new character to grow with and shape as you see fit. My interest is piqued, and I’m equally anxious and terrified of what may happen next.

Matt has a love for video games that has existed since he could comfortably grasp a joystick and play Combat on the family Atari 2600. While fond memories of SNES and shareware PC games still dance in his head, he is dedicated to enjoying as much of modern gaming as possible on all platforms. Matt has served as a game critic for several publications since 2009. When not playing games and writing reviews, Matt is an Ethernet network engineer for an international bandwidth provider. He is a musician through schooling, as well as a recording engineer, and he remains active composing and recording music. Matt also is a Crossfitter and an avid fan of MMA and hockey (go Flyers!).
Related Articles: The Walking Dead: Season 2
Share
Tweet
Share
Submit