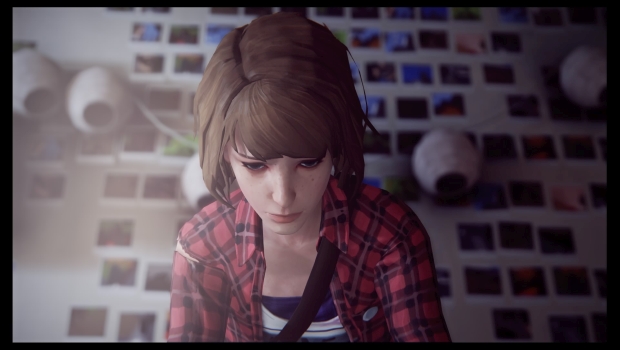 Note: This impressions piece will contain spoilers for all three episodes released so far. If you haven’t played them yet, I highly recommend you do so. For those looking for the thumbs up or down: yes, I highly recommend playing episode three of Life is Strange.

In my article on Life is Strange’s second episode, I wrote about how consequences were finally being shown for Max’s powers. In fact, one of the most poignant moments from that episode was when your powers were taken away, and you were left to try and stop a friend from jumping off a roof, with no rewind to rely on if you said something wrong.

Little “mementos” remind you of the choices you’ve made throughout the episode.

“Chaos Theory,” the third episode of Life is Strange, does a lot to empower you and remind you of the reach that Max’s rewind power has. Far greater a reach than you might have anticipated, and with ramifications that have changed the entire course of the series.

As Blackwell’s mysteries have started to unravel, most of “Chaos Theory” is spent snooping around. There are plenty of opportunities to rifle through character’s belongings, look for evidence, and avoid detection. The early part of the episode in particular has some interesting sneaking moments, and lots of little insights into the background characters that populate Blackwell Academy.

Creeping through Blackwell at night is creepy at first, but it allows some calm inner reflection time for Max.

The center of the story, though, is Max and Chloe. They’re together through almost the entire episode, to the point where you might forget that you’re only controlling one character. The way that Dontnod develops their relationship in this episode is touching and sentimental; breaking into school, sneaking into pools, and playing dress-up really establish the fact that these two were once best friends, and are finally back to that same intimacy again.

Hitting close to home with moments like that, “Chaos Theory” is refreshing in the way it approaches friendship. The character talk about fears, hopes, life and love, all while joking and making subtle, playful jabs. Little pieces of time, the kind you want to stay in forever, are littered in the scenes between these two protagonists. The option to kiss Chloe on a dare is still one of my favorite moments from the episode; I kissed her, then rewound and chickened out. Chloe called me on it, saying I probably did and then reversed time. So I went back again and did it, now out of both recklessness and cheeky spite. While the kiss itself is one of the odder points of the episode, the joyful banter between the two carried the moment through the awkwardness.

Segments like the night swim in the pool and Chloe’s house in the morning after are sweet, a high point for her characterization in the series.

The puzzles in “Chaos Theory” are thankfully more in-tune with the series’ nature. Less memorization, more clever use of rewind mechanics and multiple ways to tackle events. In the pool, for example, you can choose to use rewind to sneak by the security guard, or do it just by picking a good hiding spot. There’s still moments where you have to talk to someone, get a conversation topic, rewind and talk to them again, but that section provides so much background info that it doesn’t feel too much like repetition.

The episode takes a dark turn in the latter half, as things start to go downhill. The sweet moments between two friends are replaced with fear and anger, as you begin to discover more of Rachel Amber’s past. It culminates in Chloe getting furious with Max and dropping her off at Blackwell in silence. Sitting in her room, Max stares longingly at a picture of Chloe and Max from their childhood, on the day Chloe’s father died… and then, suddenly, discovers her powers aren’t as limited as she thought.

A single photo represents so much, and will have drastic ramifications from this episode on…

What carries on from there is where the episode leaves you, and it’s a huge cliffhanger, the kind that makes you step back and take a deep breath. Because of the work put into developing the relationship of Max and Chloe, and the world building done in the first two episodes, the third’s finale hits like a truck. What has changed? What is the same? The choices you’ve made, do they matter anymore? And will you be able to fix what you’ve created?

“Chaos Theory” is the “Uncle Ben” moment of Life is Strange, where you realize that with great power comes great responsibility. In a moment of weakness you made a major change in the world, and now you’re seeing just how sweeping the consequences are.

Life seems normal at first, but the weather keeps changing and the foreshadowing keeps growing.

It goes without saying that I’m infatuated with Life is Strange now, and this episode has solidified as one of the high points of this year for me. With each installment the team at Dontnod Entertainment outdoes themselves, and each cliffhanger leaves me begging for more. There’s no definite date set for the fourth episode yet, but I can guarantee that myself and many other fans will be waiting on baited breath until then. It’s not only a fantastic title, but Life is Strange has sparked discussion like few other games have, and all positive.

If you’re reading this and still haven’t started Life is Strange… well, first I would chastise you for reading spoilers, and then I would throw at any available nearby gaming device and tell you to start playing now. Life is Strange has become one of this year’s must-play series.