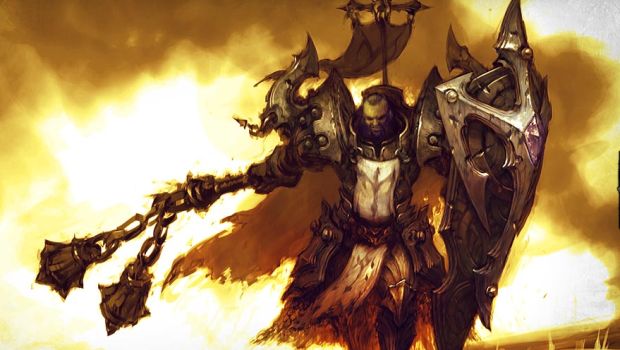 I’ll admit that I was a bit surprised when I saw the announcement of Diablo III: Reaper of Souls – I didn’t expect to see a reveal until…well, today.  That said, it was a welcome announcement as the original title has been one that my wife and I have played through multiple times now, enjoying every second.  We went hands-on with both the PlayStation 4 and PC version of the game.

My wife and I tackled the PlayStation 4 demo as a pair, her playing a Wizard as I took the new Crusader class into the field.  This demo opens after the events of Diablo III putting both of our characters at level 33, so if you’ve not beaten Diablo III go do that and come back,  we’ll wait.

We join our heroes as the town of Westmarch is being sieged by an army of the undead.  We start at the edge of town, battling through the besieged landscape to reach the Zakarum Cathedral.  Malathael has unleashed revenants and reapers into the world, but how they are breaching our plane is yet unknown.

The Crusader’s role is a bit of a mixture.  He uses flails and a shield for close-range battle, bashing enemies with righteous fury.  He can also consecrate the ground healing everyone in the area.  When pressed by the enemy he can use something called “Steed Charge” causing a horse to appear underneath him and carrying him to safety.  This power, when augmented with a rune, turns the horse into an offensive weapon, spreading fire behind him to immolate your foes.  The Crusader also has “Laws” that they follow in their role as a holy warrior.  These laws embolden the warrior, increasing his damage as well as those around him, or emanating a healing aura in his just cause. All of these attacks work well for close range, but the Crusader is also capable of reaching out and crushing your foes.  Calling holy lightning down from the sky or even leaping into the heavens only to crash down on your enemies shortens the distance between you and your foes.  In all, the class felt very balanced and fit well with the present character class roles.

Pushing past people that scream as their souls rip from their bodies to turn and fight us, we finally reach the Cathedral.  Tyrial is there, as is a man named General Torion – they’ve uncovered the unfortunate truth behind the rising dead.  Malathael has commanded his Maidens of Death to create orbs that can transform hundreds of innocent people into his minions.  These Soul Crucibles will allow him to raise an endless supply of soldiers for one purpose – Malathael intends to rid the world of both angels and demons.  With the Primevils gone, Malthael believes that this is the best time to end the conflict.  Humans are decedents of demons and angels, and Malthael intends to rid the world of both

As we open the Cathedral doors we find bodies stacked against the walls as Kasadya, a Conjurer of Death, forcibly rips out the souls of helpless victims.  Dispatching her left us with more questions than answers.

Leaving the Cathedral we meet up with Tyrial once again.  He believes that he can use a shard of the black soulstone to divine Malathael’s location, as well as the true intent and depth of his plan.  As we set off to destroy the remaining Soul Crucibles our demo ended.  Just like the closed beta of Diablo III, I’m certain that this is just a very small taste of the world that Blizzard is building in Reaper of Souls.  There are a few more changes coming, though Blizzard was fairly tight-lipped about how they will work as the game is still very much in development.  Obviously the Auction House is about to close, but the team is also changing the way that loot is operating.  Dubbed Loot 2.0, the drops are still being tuned in the recently-released patch.  Similarly, the team is rethinking the way Paragon levels should work, changing them from a character specific trait to one that is shared across your account.  The team cares deeply about extending the game well beyond your initial play-through, and while we don’t have a release date yet, it can’t come soon enough.  We are ready to return to the world of Diablo.

Ron Burke is the Editor in Chief for Gaming Trend. Currently living in Fort Worth, Texas, Ron is an old-school gamer who enjoys CRPGs, action/adventure, platformers, music games, and has recently gotten into tabletop gaming. Ron is also a fourth degree black belt, with a Master's rank in Matsumura Seito Shōrin-ryū, Moo Duk Kwan Tang Soo Do, Universal Tang Soo Do Alliance, and International Tang Soo Do Federation. He also holds ranks in several other styles in his search to be a well-rounded fighter. Ron has been married to Gaming Trend Editor, Laura Burke, for 21 years. They have three dogs - Pazuzu (Irish Terrier), Atë, and Calliope (both Australian Kelpie/Pit Bull mixes).
Related Articles: Blizzcon, Diablo 3: Reaper of Souls
Share
Tweet
Share
Submit