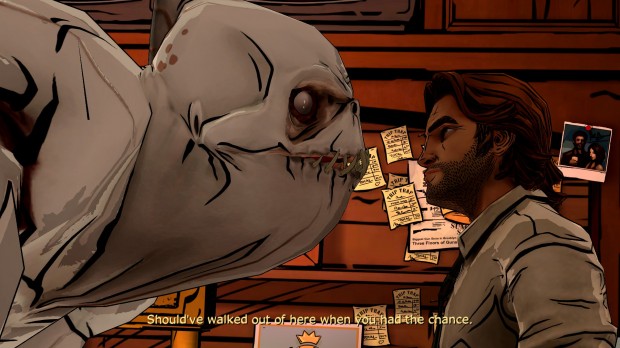 After authoring the consensus Game of the Year with last year’s episodic adventure series The Walking Dead, Telltale Games no longer has the advantage of sneaking their next release under the radar. Ever since announcing that their next undertaking would be a series based on the Fables comic books by Bill Willingham, all eyes have been on them — it’s a tremendous amount of pressure.

The new series — The Wolf Among Us — has officially begun. After playing through the first episode, “Faith,” I’m left thinking that Telltale Games could have another hit on their hands.

For those unfamiliar with Fables, it is a DC Comics series surrounding characters from fairy tales and folklore — such as Snow White, Ichabod Crane, and even Grendel from Beowulf — that have been forced out of their respective homelands. To get by, they have gathered in New York City in an area of Manhattan they call “Fabletown.” Some characters, however, can’t quite pass for human — they’re sent to “The Farm” in upstate New York unless they can afford “glamour” which hides their true identity.

The Wolf Among Us puts you in the shoes of Bigby Wolf — a humanized version of The Big Bad Wolf of Little Red Riding Hood lore — serving as the sheriff trying to keep the peace in Fabletown. After a short interrogation of a certain Mr. Toad, you find yourself investigating a disturbance in an apartment that quickly erupts into a vicious confrontation. The plot unfolds shortly thereafter.

The gameplay follows the archetype set by The Walking Dead: it’s a point-and-click adventure game with heavy emphasis on conversation and quick decision-making (with plenty of moral grey area). But don’t let the fairytale characters fool you — this game is dark and violent. These more-than-human beings can take a significant amount of brutal punishment and live to tell the tale. Even in this two-hour episode, there are several opportunities to witness such assaults.

Once again, front and center in The Wolf Among Us are the characters. Bigby Wolf is trying to leave his murderous past behind him; The Woodsman, once a hero, is now disgraced; Dee and Dum Tweedle appear to serve as muscle for an as-yet-unknown employer. By the first episode’s finish, I not only had a decent idea of each character’s personality, I was excited to learn more.

Unsurprisingly, though, the most engaging aspect of The Wolf Among Us thus far is conversation. This is not your typical brain-teasing adventure game — it’s a character-builder, a choose-your-own adventure where you don’t just make decisions, you determine how your character feels about them and how they may affect those around him. As with The Walking Dead, the secret weapon is the timer. You can’t just deliberate for an indefinite amount of time over what to say next. If you wait too long, your character will remain silent, a response in and of itself. It creates a sense of urgency that makes even the more mundane interactions feel poignant.

For all of this title’s successes, some of the less stellar trappings of Telltale’s previous series remain. For all of the decision-making involved, it feels as if you can only control small aspects of an otherwise persistent big picture (though it’s impossible to say for certain just yet). The lack of puzzle-solving makes the vast majority of the time spent between conversations feel inconsequential. And do we really need a prompt to tell us when we just made a game-affecting decision? Seeing “Mr. Toad will remember that” strips away the mystery and makes the rest of the conversation you had feel pointless. Here’s hoping that future episodes bring about an option to disable these notifications.

Episode One of The Wolf Among Us ends — of course — with a cliffhanger, but as Episode Two cannot be far behind, it accomplishes its job perfectly, causing me to immediately pine for the return of this intriguing series. “Faith” whet my appetite for the wondrous world of Fabletown. The hooks are in, and I can’t wait to see what happens next.

Matt has a love for video games that has existed since he could comfortably grasp a joystick and play Combat on the family Atari 2600. While fond memories of SNES and shareware PC games still dance in his head, he is dedicated to enjoying as much of modern gaming as possible on all platforms. Matt has served as a game critic for several publications since 2009. When not playing games and writing reviews, Matt is an Ethernet network engineer for an international bandwidth provider. He is a musician through schooling, as well as a recording engineer, and he remains active composing and recording music. Matt also is a Crossfitter and an avid fan of MMA and hockey (go Flyers!).
Related Articles: The Wolf Among Us
Share
Tweet
Share
Submit