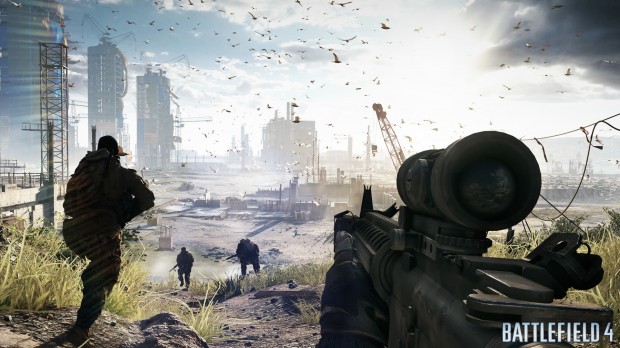 Before Battlefield 4 pre-orders unlock everywhere, I have been playing through the game in an effort to provide a comprehensive review. However, it is difficult to properly critique such a multiplayer-centric title without plenty of time spent in fully populated servers across all maps. As such, the full review is still in progress until some quality multiplayer hours are logged. But there’s nothing stopping us from discussing the single-player campaign in the meantime.

The Battlefield franchise hangs its hat on large-scale multiplayer warfare. But perhaps in an effort to compete with rival shooter Call of Duty, 2011’s Battlefield 3 ushered in the first single-player campaign of the core franchise — the critical reception of which was lukewarm at best. This time is no different; don’t get your hopes up for an overhauled experience.

There are good things to discuss: Battlefield 4 looks stunning. The Frostbite 3 engine raises the bar for realistic visuals in this setting. From the textures to the draw distance, rolling waves to trees succumbing to the wind, get used to picking your jaw up off the ground. Even on my modest rig unable to handle the highest settings, the graphics impress at every turn.

Of equal caliber is the sound design. The Battlefield franchise has spent years on the top of the heap with its lifelike audio effects, and the newest iteration carries the torch with pride. Every weapon fires with such power and force that you swear it’s to blame for your tinnitus. The angst garnered from the sound of bullets whizzing by and striking the wall next to you is unmatched. Voices from your squadmates implore you to proceed in such authenticity that you swear you must share the room with them, sitting at your gaming rig.

The shooting is tight and accurate. The GUI is informative and non-intrusive. The controls are consistently responsive. All the pieces are in place, right?

Unfortunately, much of the remainder of the single-player experience ranges from merely mediocre to downright laughable. This is your standard six to seven-hour shooter campaign, and it feels pretty much like any that have come before it in this past generation.

The narrative is painfully familiar: good-guy Americans face off against bad-guy extremists in some other part of the world. In this case, it’s a one-two punch of China and Russia. A Chinese admiral wants to overthrow the government and declare martial law with the support of the Russians, and the US is blamed for the assassination of Jin Jié, the man expected to bring peace to China. Hilarity ensues (cue the Benny Hill theme).

It plays out like a mishmash of archetypes: the voiceless protagonist, the “by the book” leader, the moral-minded dissenter, the power-hungry evildoer… All are present and accounted for, along with other trappings like an abundance of juvenile curse words (the game actually uses “ballsweat” as an interjection at one point). There’s even a character that dies partway through the game and magically reappears at the end with no explanation whatsoever. One character even asks him how he survived. His response: “They had me fucked, then I got unfucked. Leave it at that.” I wish this was an exaggeration.

There are some positive changes, though. Battlefield 4 adds a Weapon Crate to the campaign, an arms depot that is placed regularly throughout the game. At each one, you can access all of the primary weapons that you’ve unlocked thus far, giving you lots of options by the end for how to approach a given situation. There’s a Gadget Crate as well that houses explosive weapons, but only certain gadgets are available at each crate, proving much less versatile.

There is also the occasional visually impressive scripting sequence, but there aren’t enough “wow” moments to make up for the suffocating linearity. Things feel great early on, but after a few hours, Battlefield 4 amounts to a shooting gallery — enter an area, clear it out, move to the next area. There was a particularly cool sequence that involved a sinking aircraft carrier, but beyond that, there are few memorable instances.

The whole thing culminates in an insult of a “moral” choice at its anticlimactic conclusion, neither option offering much of an ending to speak of. Like Battlefield 3’s before it, Battlefield 4’s single-player campaign just serves as a reminder that DICE’s strength lies in multiplayer gameplay. Though, it’s worth mentioning that Michael K. Williams helps make the experience more entertaining, if just to say that you have Omar in your squad (or Chalky White, pick your poison).

Don’t be distraught; if you’re interested in Battlefield 4, you’re not coming for the single-player campaign. While I’m still logging the needed hours to see all that it has to offer, my initial impressions are extremely positive, and I’m confident that Battlefield fans will feel right at home. Keep at the site for the upcoming full review of Battlefield 4.

Matt has a love for video games that has existed since he could comfortably grasp a joystick and play Combat on the family Atari 2600. While fond memories of SNES and shareware PC games still dance in his head, he is dedicated to enjoying as much of modern gaming as possible on all platforms. Matt has served as a game critic for several publications since 2009. When not playing games and writing reviews, Matt is an Ethernet network engineer for an international bandwidth provider. He is a musician through schooling, as well as a recording engineer, and he remains active composing and recording music. Matt also is a Crossfitter and an avid fan of MMA and hockey (go Flyers!).
Related Articles: Battlefield 4
Share
Tweet
Share
Submit