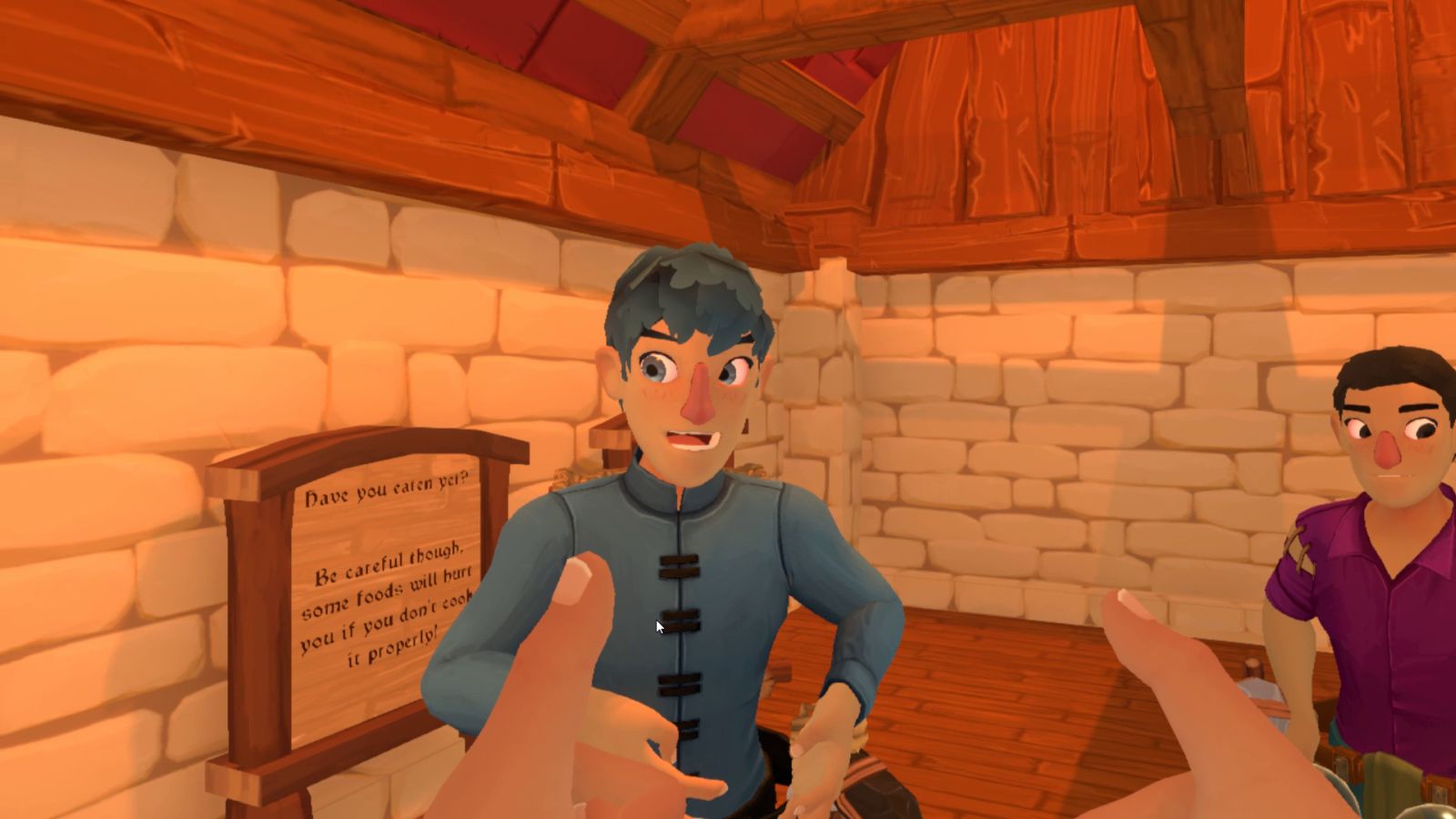 While people were running around battling evil (and each other) in Ultima Online, I was baking bread and banging out comfy furniture in town. I’m more at home crafting armor than wearing it in RPGs. I’m a crafter to my core. When developer Alta announced that their game A Township Tale would essentially be an open world multiplayer VR RPG full of blacksmithing, crafting, mining, as well as cooperative adventures, I was very interested. Could this be the VR busywork type of game that I love so very, very much? Well…yeah, actually. Let’s dive in a little deeper.

First and foremost, you should know that I’m not going to review A Township Tale. It’s available for free at the developer’s page right here, or you can pay the Oculus team 10 bucks for a native version, which includes 1000 Talems (more on that in a sec) and the ability to run your own server. The 25 people who still own a Windows Mixed Reality headset can even play it — it supports any PCVR HMD. Instead, I’ll try to answer the questions about activities, comfort, and cooperative play. Since you can try it yourself, I’ll leave it to you to figure out if it’s your kind of game. The fact that I’m taking the time to write about it, tells you that it’s certainly mine.

With the game downloaded (it’s just a 4 GB size commitment), you’ll create your first character. There are 18 different categories of customization, including your hair style, beards, eyewear, jackets, shirts, skirts, mustache, and much more. This initial look isn’t all you can sport, but we’ll get into optional cosmetics in a bit.

With your character created, it’s time to set out to craft some fun. Finding a rock and a stick and slapping them together is a mainstay staple of any RPG, so naturally it serves nicely as your first crafted item. Finding flint lets you change things up when placed on the end of a stick, creating a primitive pickaxe. A chunk of flint on its own makes a good rudimentary chisel. Grass wrapped around a stick makes a torch. Smacking flint against stone creates sparks, which are perfect for making fire. The whole game is physics based, so the best way to discover new things is to simply do them, and frankly, that’s half the fun.

With fire and a weapon sorted out, at least for now, it’s time to find food. Fruits and berries, pumpkins, and even small game can all be eaten or cooked to keep yourself well fed and alive. Now it’s time to go from living to thriving.

Once you reach town you’ll have access to all of the crafting areas, and in them you’ll find books on how to build various things. Once you find what you want to craft, remorselessly rip it from the book and put it in the page holder on a crafting table — don’t worry, it’ll pop back once you are done. Once you’ve gathered the right resources, and you’ve placed the recipe, an indication on what’s next appears. For example, when making a handle for an axe, it’ll indicate where you will use a hammer and chisel to begin to shape it. With one side straightened out, you’ll rotate the table with a lever on the bench. This exposes the other half, allowing you to chisel that side. How hard you chisel, and how accurate you are on the placement is important. Better equipment helps overcome imprecision, as does making your hammer swings consistent. Rotate, chisel, rotate, chisel, and eventually you’ll either have a functional handle, or broken bits.

With a functional handle, it was off to the smelter to melt down some metal to try to create something to attach to it — iIn this case, an axe head. Pulling an ingot out of the smelter with tongs, I’m now able to use the anvil to begin to shape it. As the metal cools, I plunge it back into the forge to heat it again to temperature. Back to the anvil — flip, hammer, flip, hammer. Doing my best “Forged in Fire” impression, an axe head begins to take shape. Attaching it to the handle gives me a functional tool, and I’m now ready to head out and chop some wood to make the next thing!

A Township Tale VR RPG : Developer Gameplay #1 - Into the Mines!

My wife and I love VR, and this game lets us discover a whole world of fun together. As the game doesn’t have an overall story arc or quests, your enjoyment will largely depend on who you connect with on your chosen server, or if you’ve brought a friend. Unfortunately the game, at the time of writing, doesn’t support cross-play so you’ll have to be on the same ecosystem. Frustrating to be sure, so I hope it’s something the team corrects in the near future.

I do have one complaint, and it makes me immediately recommend that you stick with the PCVR version. The Quest version of the game is a graphical downgrade when compared to the PC to ensure it can run on the Oculus Quest hardware without the need to connect to a PC. If you are really insistent on being the guy wearing a Quest on your face on the bus, then great — take it with you, but most of us are just fine streaming or connecting a cable to our PC. The lighting is reduced, the poly count is obviously lower, and shadows are just absent. I can’t say it any better than the developers themselves, so check out this video for all of the details.

The draw of A Township Tale is not that the activities are complex or difficult, but that you feel like you are actually doing something beyond “hold E to craft”. Every single thing you create in the game feels like something you’ve earned with the sweat of your brow and the skill of your hands. Discovering new materials means new opportunities to create, and that discovery is the fun. It’s relaxing, and I’m here for it.

Combat in the game revolves around the same physicality as crafting. Swinging a sword, firing an arrow, blocking with shields, using a spear, or even dual wielding are in the game. Kill enough critters and you’ll level up, earning skill points to unlock skills like a wave slash, or an AOE called a Divine Strike. Similarly, you can unlock archery skills like a triple arrow attack or a charged shot. It’s not the primary focus of A Township Tale, but it’s fun and it does add some risk to the reward.

Not unlike other live service style games, there is a store rotation of cosmetic items available for purchase. If you are a “Supporter” (read: monthly subscriber) you’ll get a discount on prices, but all of it comes down to “Talem” (or Nachos as they are more commonly called by people I ran into). Talems can be purchased with real world money, and are not currently available as something you can earn in-game. It’s a way to support the ongoing development of the game, so I get it, but that may be a turn off for some folks. Current pricing gets you 1000 Talems for $9.99, with a $79.99 purchase giving you 8000 Talems with an extra 1500 as a bonus, with various one-time options in between. The subscriptions I mentioned are also tiered, with a $9.99 per month, $8.99 a month if you bill quarterly, or $7.99 per month for a year long commitment. You’ll get 750 Talems a month, as well as a smattering of other thank you items. You’ll also gain access to the code to run your own server, if that’s your thing.

There are handful of biomes and events that I’ve found in the game thus far — the town, of course, the valley and forest that runs alongside the town, mines, a pond, small fortified camps, a giant battlefield, some mountains complete with cliffs, a dust bowl, and a desert area. It’s all interconnected, and traversing any of it without any loading keeps you locked in and immersed.

For those worried about comfort, there are a handful of levers to pull to help keep nausea at bay. A vignetting mode can be tweaked to match your personal tolerance, and you can teleport to move, or use smooth locomotion. Other small tweaks can help stave off any wobbles, but I’m happy to say that neither my wife or I had any troubles with nausea.

Multiplayer games are make or break based on their community. Everyone I encountered in A Township Tale was extraordinarily helpful. They were always eager to demonstrate how to craft anything in the game, and they were always happy to step to the forge to assist. Even if they weren’t using voice chat, simple gestures got their point across, making chance encounters with other people more positive than you might expect.

There’s a wealth of content in A Township Tale to discover, and as I said before, discovering it with friends is half the fun.

A Township Tale is available on the Oculus Store for $10, or free for PCVR HMDs on the official developer page.

Ron Burke is the Editor in Chief for Gaming Trend. Currently living in Fort Worth, Texas, Ron is an old-school gamer who enjoys CRPGs, action/adventure, platformers, music games, and has recently gotten into tabletop gaming. Ron is also a fourth degree black belt, with a Master's rank in Matsumura Seito Shōrin-ryū, Moo Duk Kwan Tang Soo Do, Universal Tang Soo Do Alliance, and International Tang Soo Do Federation. He also holds ranks in several other styles in his search to be a well-rounded fighter. Ron has been married to Gaming Trend Editor, Laura Burke, for 21 years. They have three dogs - Pazuzu (Irish Terrier), Atë, and Calliope (both Australian Kelpie/Pit Bull mixes).
Related Articles: A Township Tale, VR
Share
Tweet
Share
Submit