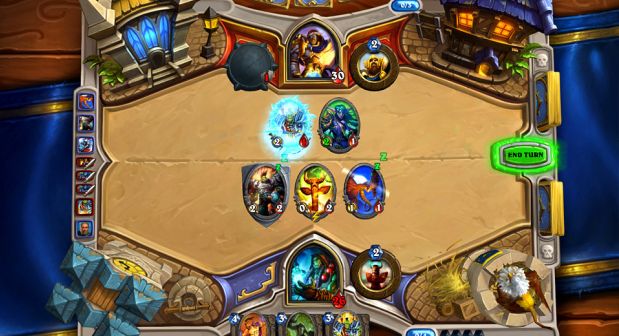 Collectable card games and Blizzard… Those don’t go together, right?  If you thought that you probably aren’t alone.  You’d also be very, very wrong.  Today we got extensive hands-on time with the latest build of Hearthstone: Heroes of Warcraft, the next big thing coming from Blizzard Entertainment.  Starting as an experiment to see if the company could still create AAA titles with a very small team, the game was met with a lot of initial confusion.  The first build that went to the whole company for internal testing completely dispelled any question though – this game was going to be huge.  When employees are coming in early and leaving late, logging over 5,000 hours of gameplay in just over three weeks, you have something special.

I have “a few Magic cards” (those who also have that amount know what I mean), so CCGs are not exactly new to me.  My wife on the other hand has only played a handful of games, never really jumping in with both feet.  She sat down and picked up the game with no instruction – the best test on whether or not this was as intuitive as it looked.  I sat down at a machine nearby and we played separately and compared our experiences.

Unlike most CCGs, this game was designed to be accessible to all players, with reduced complexity and the removal of things like interrupts that create extra phases other than casting and combat.  There are two modes of play available currently – “Play” which allows you to build a full deck like you would in the traditional sense, and “Arena ” which appears to be the far more popular option.  Arena gives you three sets of cards, asking you to pick just one until you have a full deck of 30.  You are essentially building your deck on the fly.  To help new players there is a small graph that keeps track of your card levels, ensuring you are aware of where the largest concentration of your card powers lie.

As this is a Blizzard game, they are free to pull in all of their classic characters and use them as creatures in the game.  This means murlocks, orcs, humans, elves, and much more will be fighting on your hero’s behalf.  All of the characters also have their voices in the game, so expect to hear Murlocs make their requisite sounds, and when your turn ends you get to hear the classic peon quote “job’s done.”

Unlike games like Magic, there are no ‘land’ cards for your resource, instead granting one mana per level.  This means that you don’t have to worry about land management, ensuring simplified gameplay that focuses more on creature strategy.  Just like in Magic, though, your creatures are summoned ‘asleep’, and if your opponent is similarly asleep there is a little wick for an explosion that acts as a timer to keep the gameplay moving.

So at the end of the first round my wife and I compared notes.  Both of us scored a victory, but her’s was stunning – she devastated the enemy creatures and crushed her opponent taking almost zero damage herself.  This is a pretty big testament to the accessibility that Blizzard has achieved with this title.  Her next question confirmed it – “So when does this come out?”,  The game is heading into open beta next month (that could be January – this is Blizzard afterall) – see then for yourself!

Ron Burke is the Editor in Chief for Gaming Trend. Currently living in Fort Worth, Texas, Ron is an old-school gamer who enjoys CRPGs, action/adventure, platformers, music games, and has recently gotten into tabletop gaming. Ron is also a fourth degree black belt, with a Master's rank in Matsumura Seito Shōrin-ryū, Moo Duk Kwan Tang Soo Do, Universal Tang Soo Do Alliance, and International Tang Soo Do Federation. He also holds ranks in several other styles in his search to be a well-rounded fighter. Ron has been married to Gaming Trend Editor, Laura Burke, for 21 years. They have three dogs - Pazuzu (Irish Terrier), Atë, and Calliope (both Australian Kelpie/Pit Bull mixes).
Related Articles: Blizzcon, Hearthstone: Heroes of Warcraft
Share
Tweet
Share
Submit