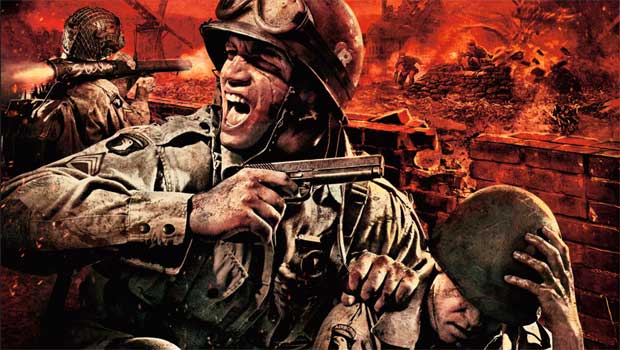 Welcome back to Games for the Masses, where we help you pay less to play more.  This is a strange week Comrades, for I must direct you to…Gamestop? Of all the most offensively capitalist game dealers, Gamestop is by largely considered the most guilty of exploiting the proletariat.  But have no fear, my little matryoshkas, for we will be going to their digital download service.

The game I’m going to highlight is set in the Great Patriotic War.  Unlike later Gearbox titles, the Brothers in Arms franchise a serious, clear-eyed look at the toll war takes on the men who have to fight it.  Mixing real, dynamic characters with gameplay focusing on cover and flanking, you’ll find this is no Call of Duty clone.  While not perfect, it’s an important step in WWII games because it treats the men not as symbols of heroism, nor as put-upon wretches, but as actual human characters.  Look into it, Comrades, and check out the rest of the sale at Gamestop–if you don’t mind supporting them.

Other big deals this week?

Amnesia ($5)—You’ve at least heard of this one.  It (along with the Penumbra series) revolutionized the survival horror genre in 2010.  If you haven’t played it yet, sit down, pull on your headphones, and turn the lights off.  Trust me, Comrade.

Darksiders 2 ($10)–It’s fitting that the game that was essentially THQ’s swan song starred Death as its main character.  This is a reccomendation by reputation, as I haven’t yet played it, but I’ve heard a whole lot of really great thing. Consider it if you’re looking for a half-decent Zelda game without anybody shouting “HEY! LISTEN.”

The folks over at Humble Bundle have a new weekly sale, this time focusing on Positech Games.  You know what that means, Comrades?  Democracy, life-sims, and GIANT SPACE LASERS!!!

Another bundle is going on at Indie Royale, as well.  This week it’s the “Indie Gamer Chick Battle.”  Given the choice of games, I’m not sure what it has to do with “Gamer Chicks” but hey, who am I to judge?

Those are the big deals I saw this week.  If I missed one, let me know in the comments below.  Until next week, game on, Comrades!