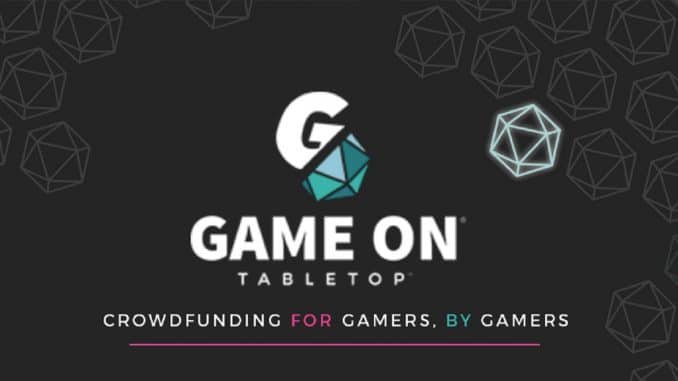 Crowdfunding is a massive force for tabletop, and one that Game on Tabletop feels has been underserved. While Kickstarter is the watchword of tabletop creators, its infrastructure is not specifically built for those creators, posits Jenny Bendel of Game on Tabletop. This company’s goal is to create more robust, stable campaigns and help them see their products through from start to finish.

Part of this help includes hands on work before the campaign even begins, to make sure that artists are aware of everything they need to have prepared to finish their game. Game on Tabletop is even willing to reject projects that aren’t ready, adding some sorely needed curation to the crowded field of crowdfunded tabletop games.

Other features include an established network of creators to signal boost and provide feedback on design, but some of the best changes come in the form of the campaigns themselves. Whereas Kickstarter has a standard format, Game on Tabletop’s allows individually tailored campaign pages to help creators enforce the theme of their individual products.

Additionally, their campaigns feature auto-updating stretch goals. Stretch goals are what set tabletop campaigns apart for the consumer, and Kickstarter requires manually opening the campaign and entering changes, whereas Game on Tabletop allows creators to preset those changes, which will automatically update the campaign when it reaches the requisite funding level.

The international nature of the company is what got it started, and may stand out as its greatest strength. Game on Tabletop started out to assist French developers, as Kickstarter was not available to their markets, and has built a strong basis in French and German design. The Dark Eye (or Die Schwarze Auge), Germany’s most popular RPG, got its start on one of their campaigns. Most campaigns are still based in France and Germany, but by connecting with US developers Game on Tabletop is working to streamline the process of translating and localizing international products. It is soon to open its doors up to Italy and Poland, where I can already think of a few games in need of translation to expand their markets. (Portal Games’ Neuroshima setting comes to mind immediately.)

With a 100% success rate in its first few months of existence, Game on Tabletop has made a strong showing that I hope continues. It has already partnered with Pinnacle Entertainment Group, Paizo Publishing, and the team behind TORG Eternity. New features it is working on include digital content solutions to help players download PDFs directly from their services, reaching out to brand new designers, and reaching out to the community directly to discover its needs. Plan on seeing more coverage of Game on Tabletop and its evolving campaign models in the future, because I predict that this company will not be going anywhere.