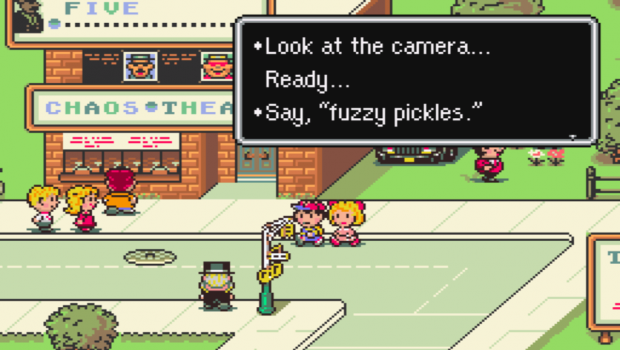 On Wednesday, Nintendo threw a massive amount of information at us through one of their Nintendo Direct videos. In it, Nintendo president Satoru Iwata detailed a long list of upcoming release dates and new titles fans can expect in the coming months. There were a few surprises, to be sure, with a new 3DS Zelda game set in the same world as A Link to the Past, as well as a new Yoshi’s Island game.

What surprised me the most, though, was Nintendo’s almost casual announcement that they’re releasing EarthBound, or Mother 2 as it’s known in Japan, on the Wii U’s Virtual Console in both North America and Europe.

Full disclosure — I’m a giant EarthBound fan. I’ve cosplayed as Ness, and up until I had to part with it for rent money, I’ve owned a complete copy of the game on SNES — with box and strategy guide, complete with those weird scratch-n-sniff cards. So, for me, this is a really big deal.

Most people in the West, particularly people who have only gotten into gaming since this last generation, may not understand why this is huge news. But huge it is: not only for introducing a new generation to one of the greatest, most unappreciated adventures in video game history, but also for what it says about NIntendo as a company.

Nintendo actually listens to its fans, and the Miiverse is an amazing idea

Nintendo is a notoriously quiet company. Typically, you won’t hear much about an upcoming game from them unless they specifically release that information themselves. Leaks appear to happen for every single video game studio in existence — except Nintendo, who keeps a firm lock and key on everything that they do. Apple is very similar in this regard — these companies would prefer to remain silent about rumors or criticism, rather than confirm or deny anything outright.

[singlepic id=11693 w=320 h=240 float=left]This silence also extends to how they deal with their fans. Entire websites devoted to campaigns that petition for localized games are met with, at best, a casual brush-off from a PR robot, or at worst, absolutely nothing. Sites like EB Siege and Operation Rainfall sprung up as a gathering of super-fans, dedicated to getting their favorite games in America and Europe. These were people willing to call Nintendo, or send emails, trinkets, and drawings, just for a chance to throw money at them for a game that they loved. Hell, whenever I would take one of those Club Nintendo surveys, I always answered the question “What would make the eShop a better experience?” with “Needs more EarthBound.”

And yet, Nintendo seemed like they ignored all of this.

When fans clamored for games like The Last Story, Pandora’s Tower and Xenoblade Chronicles, their fervent cries were met with a shrug. Sure, these games eventually found their way to US shores (as a Nintendo published GameStop exclusive in Xenoblade’s case, and through other publishers with The Last Story and Pandora’s Tower), but Nintendo wouldn’t ever confirm or deny that we were going to get these games until a few months before we actually got them. We got the impression that they were just kind of nodding their heads, sort of listening to our pleas, while the suits in their ivory tower decided things like “market viability” or other more cold, calculating standards.

When Nintendo announced that Japan would get EarthBound on the Wii U’s Virtual Console, there was an outcry from fans in North America in Europe — just as there always has been. This time, however, there was a way that the fans could directly interact with Nintendo, while also publicly showing their love for the game they’ve been waiting for.

The Miiverse was the perfect opportunity.

Everyone who owns a Wii U is connected to the Miiverse, and there’s no designation between a North American Miiverse and a Japanese Miiverse — meaning that if you load up, say the Legend of Zelda Miiverse page, you’ll see writing and drawings from not only English speakers, but also Japanese and European residents. This allows for fans of all cultures to discuss and enjoy the great Nintendo franchises fans have loved for years.

When Nintendo released EarthBound on the Japanese Wii U Virtual Console, an accompanying Miiverse page popped up so Japanese fans could talk about the game. But, Americans and Europeans still had access to the Miiverse page. If there was ever an opportunity for those fans to speak directly to a company that is notoriously distant and literally foreign, this was the time to do it.

Drawings and messages on the EarthBound Miiverse page beseeched Nintendo for the opportunity to give them money for a game they’ve only been able to purchase at exorbitant prices or emulate in order to play. This was the best chance for Nintendo to not only see the frothing demand for this game, but for the world to notice and chime in as well. There was no concerted effort, no concentrated fan campaign to shower Nintendo of America with demands — just an outpouring from fans who wanted to finally get a chance to play a game they’ve only been able to experience with the gray market of used games and illegal ROMs.

[singlepic id=11694 w=320 h=240 float=right]Nintendo could have ignored this, just like they have every other time fans got together to “protest” for their favorite game. This time, however, their pleas went noticed. Nintendo will be releasing EarthBound on the Virtual Console in North America and Europe (a territory that has never even had a chance to properly purchase this game).

Now, was EarthBound’s continued localization delays the result of a stubborn and apathetic Nintendo, or was it emblematic of deeper issues? While we’ll probably never hear directly from them exactly why it took so damn long for us to get it, others have done some digging into what some of the probable reasons why EarthBound was such a tricky game to bring to North American and European Virtual Consoles. And what Nintendo did to get it to those territories is probably more telling about the current climate at the company, and why we should take notice that we’re even getting this game at all.

Nintendo is willing to take some serious risks

One of the reasons that many people believe Nintendo never released EarthBound on the Virtual Console in the US was due to several legal issues that cropped up after the original game was released. Considering that it had already been rated by the ESRB in 2008, Nintendo was likely poised and ready to release it — but was unable to.

Nintendo already had to make several sweeping changes in order to release EarthBound — changing logos and names and such — but several songs are eerily similar to other actual popular music. This post on EarthBound Central back in 2009 explains exactly what issues could arise, should Nintendo release EarthBound again in its original state. Nintendo of America probably either 1) wanted to change it but met opposition from Nintendo Japan or 2) thought that the cost of changing it would far outweigh whatever sales they would get from it.

Smash cut to Wednesday. Clearly, Nintendo is seeing enough of a reason to put in a large amount of effort in getting it released in North America and Europe, without a whole lot of guarantees outside of the excitement of a vocal, but undeniably small group of EarthBound who may or may not actually buy the game once Nintendo releases it.

(Side note: Right before I was about to post this, Kotaku posted an article, asking Bill Trinen of Nintendo about any supposed legal issues. He wasn’t aware of any, and North America and Europe will get the exact version from the SNES. Whether this means there weren’t any actual problems, or if Nintendo just doesn’t care that there might be issues, doesn’t really matter. They’re still taking a gamble by putting the effort into porting it to the Virtual Console, with a chance that it’s not met with success. It’s still really exciting.)

This is the Nintendo I like to see. This Nintendo is exciting, fresh, and unpredictable.

Yes, we’ll have new Mario, Zelda, Karts, Metroids, and so on. As long as the Earth continues spinning, as long as Nintendo is a company, we’ll have these old standbys to rely on. But now, it seems like the sky’s the limit, and anything is on the table.

A North American Mother 3 3DS eShop release? Sure, why not? I mean, the game’s already translated. If you had asked me last week if I thought we’d ever see an official release, I’d laugh in your face. Now? It could happen. Another Mother game that we might actually see? It could happen.

And that’s the most refreshing thing about EarthBound’s release. Nintendo has proved that it can still surprise us, even when we think we can predict their every move. I mean, what next? A new StarTropics game?

I've been gaming since my dad made the bad decision of buying me a Nintendo when I was four years old. Every day I'd find myself with my face glued to a TV screen, punching away at buttons, getting furious with Bowser, Dr. Wily, and those freakin' birds in Ninja Gaiden. Since then I have failed to get my parents to play any board game with me, I sold my full copy of Earthbound with box and guide for $300 to some dude in Austria for rent money, and I still believe in Nintendo even after all these years.
Related Articles: Earthbound
Share
Tweet
Share
Submit