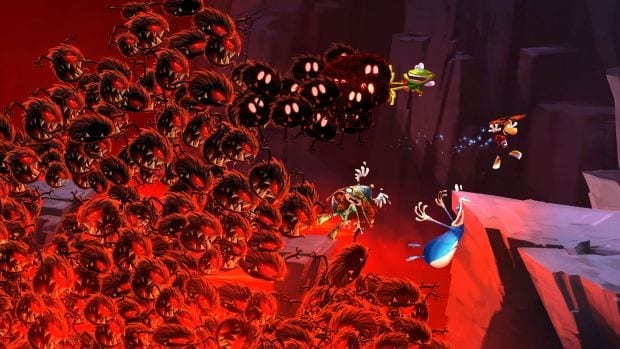 Ubisoft announced today, via press release, that their upcoming Wii U exclusive, Rayman Legends, is no longer exclusive. The highly-anticipated, highly-animated sidescroller will now be released some time in September, alongside the newly announced Xbox 360 and PlayStation 3 versions of the game.

As someone who owns a Wii U, this is disappointing and troubling news.

In a press release a few weeks ago, Nintendo announced that several of their most sought after launch-window games were missing it entirely; Pikmin 3, Wii Fit U, The Wonderful 101, Game & Wario, and more have all been pushed until the end of the first half of 2013 — at the very least. I was looking forward to Pikmin 3 — it was the reason I plunked down the $350 to buy a Wii U when I did. When it got delayed, I figured, hey, at least there are going to be other games to play, right? Rayman’s right around the corner. That’ll be awesome.

And it will — we’ll just have to wait seven more months to play it.

[singlepic id=10587 w=320 h=240 float=left]It’s just so weird all of this is happening, especially so close to Rayman’s original launch date. Ubisoft seemed perfectly content creating specifically Wii U experiences. ZombiU launched along with the system as was met with polarizing reviews, but it seems to have found an audience among hardcore gamers — the ones that Nintendo was specifically trying to court with their system.

After showing off ZombiU at their 2012 E3 press conference, they let Rayman take the stage, and let the game do the talking. Here we got to see exactly what a Rayman game would look like on Nintendo’s unique new console — using gyroscopes to manipulate levels, touching the screen to activate specific things, or cut ropes. They even went so far as to include a demo of the game — weeks before the system’s release — on all of the in-store Wii U systems.

So, what exactly happened? While VGChartz is hardly an accurate portrayal of global sales figures, they have it sitting at a low 300,000 or so units sold (which actually isn’t too shabby given the factors of launch title/hardcore difficulty of the game). So Ubisoft, realizing that the Wii U doesn’t have the attach rate that Nintendo was hoping, is trying to get the most that they can out of one title by releasing it on multiple platforms.

Developers say that the reason why no one is porting their games to the Wii U is because they don’t want to just shoehorn in some dumb map or radar on the Gamepad. I think the main reason is because everyone knows that if they port their triple-A franchise over to the Wii U, no one would buy the thing.

[singlepic id=10588 w=320 h=240 float=right]The biggest proof of this is the Wii U port of Call of Duty: Black Ops 2. Easily the best selling title of the year, the game moved gangbusters on every single system — except the Wii U. One glance at the number of online players is proof enough — several hundred thousand players are engaged in online matches on the Xbox 360, compared to a few hundred on the Wii U.

So yes, this is probably the wisest decision Ubisoft could have made regarding Rayman. Releasing all three versions on one date at the same time will build hype on systems it’ll actually sell on, without diluting its impact.

It’s just a shame, because I was really looking forward to closing out February with an actual game to play on my Wii U. Guess I’ll just have to wait until Lego City: Undercover comes out. Nintendo’s publishing that one, so it should be safe.

I've been gaming since my dad made the bad decision of buying me a Nintendo when I was four years old. Every day I'd find myself with my face glued to a TV screen, punching away at buttons, getting furious with Bowser, Dr. Wily, and those freakin' birds in Ninja Gaiden. Since then I have failed to get my parents to play any board game with me, I sold my full copy of Earthbound with box and guide for $300 to some dude in Austria for rent money, and I still believe in Nintendo even after all these years.
Related Articles: Rayman Legends
Share
Tweet
Share
Submit