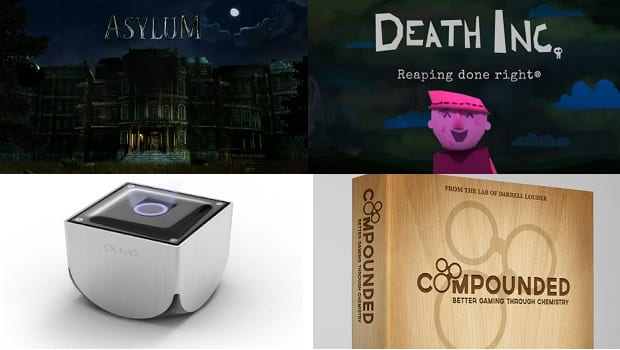 If you’ve followed Gaming Trend for any reasonable amount of time, you’ll know that we love Kickstarter. It’s brought us some amazing games, helped out some amazing people, and raised a ton of money for successful projects. In Kickin’ It, our weekly Kickstarter feature, we’ll bring your attention to games or gaming-related projects on the site that deserve special recognition in four distinct categories: Up and Coming, a promising project on its way to funding, Underrated, a project with lots of unnoticed potential, Updated, a previously funded Kickstarter with a recent progress update, and Unusual, a strange, interesting, or quirky project. This week’s projects? Asylum, Death Inc., Ouya, and Compounded.

Up and Coming – Asylum
Remember Scratches, the creepy point-and-click adventure game from Meridian4? Well the designer of that atmospheric title, Agustín Cordes, is looking to get you pointing and clicking again with his new project, Asylum. Billed by the Kickstarter page as “a psychological horror adventure inspired by H. P. Lovecraft set in a massive, decaying mental institute”, Cordes and developers Senscape promise a “twisty and satisfying” plot and a terrifying game experience. Can they deliver? The success of Asylum on Steam Greenlight, and over a thousand Kickstarter backers say yes.


The rewards for backing the project include the usual suspects, like a copy of the game and recognition in the credits, but some unique goodies are also up for grabs. These range from being immortalized as an inmate or a doctor in the game to a copy of the asylum’s “Record Book of the Insane”, an actual, physical book(!!!) featuring backstory and other interesting tidbits. The project is well on its way to being funded with about $35000 raised out of a goal of $100666 and 23 days to go, but that shouldn’t stop you from visiting the Kickstarter page to learn more or contribute.

Underrated – Death Inc.
As the recent debates over violence in video games constantly remind us, lots of games focus on killing things. Whether with lasers, or rockets, or magic, or swords, there’s an unending supply of games that focus on the destruction of the enemy. None of them, however, accomplish this in quite the way this Kickstarter project does. British developers Ambient Studios, whose staff includes credits from big titles like LittleBigPlanet, the Fable series, and Need for Speed, are introducing a new weapon into the mix: pestilence. Death Inc. puts gamers in the role of a freelance Reaper, working hard to spread the plague through 17th century England.

Take control of the Grim Reaper in a freehand strategy game of plague, pestilence and profit, for PC and Mac.

Death Inc. is not your typical strategy game. It’s a unique mix of real-time strategy, god game and business sim, harking back to some of the classic Bullfrog games like Theme Park and Dungeon Keeper.

Simply paint your orders into the world and unleash your infected minions on serfs, wenches and noblemen. Every human that falls will join the ranks of your pestilential horde.

The concept sounds interesting, and I think the unique art style and gameplay mechanics reveal a lot of hidden potential in this game. The Kickstarter project is new and Death Inc. still has a month to go to reach its funding target of £300000 (around $500000), but with only 2% of that raised so far, I’m sure Ambient Studios would appreciate some more backers. Visit their Kickstarter page here.

Updated – Ouya
Almost every gamer remembers Ouya, the massively successful open-source console Kickstarter whose claims of running Skyrim on a $99

Android box raised quite a bit of skepticism from yours truly. After shipping developer units out at the end of last year, Ouya’s Kickstarter was recently updated with the results of their 10 day long CREATE “game jam” that challenged developers to create game prototypes for the console that’s set to ship to backers next month. How did it go? The update summarizes the 166 entries this way:

We’re seeing dungeon crawlers, action RPGs, brawlers, 4-player shooters, TCGs, platformers, word games, puzzlers and some other cool stuff ya just can’t put in a category.
Dev teams hail from all over the world – from France to Canada, Germany to New Zealand, U.S.A. to South Africa and more! Whoa. We will announce winners in a couple of weeks.

Ouya backers will be able to vote on their favorite game concepts, allowing the developers to win prizes and get a better shot at releasing a final product. Also mentioned in the update is a revamp of the controller design based on user feedback. Check it out on the Ouya website here, and read the full update on their Kickstarter page here. EDIT: Ouya now has a tentative launch date!

When I hear “educational game”, I think of the Reader Rabbit and Sesame Street titles I played on the computer as a kid. Sure, I’ve learned new things from games since, but it’s been a while since I’ve played a game whose main goal was to teach me something, and if your age is in the double digits you can probably say the same. Dice Hate Me Games, a small board and tabletop gaming company, is looking to change that with Compounded. The full title of the Kickstarter project is “Compounded: Better Gaming through Chemistry” should give you an idea of what you’re in for here, but even if science was never your best subject, don’t look away just yet. The project page describes Compounded as “a chemistry board game with elements of strategy, social interaction, just a bit of luck – and, oh yeah, explosions.”

Compounded is a game about building chemical compounds through careful management of elements, a fair bit of social play and trading, and just a bit of luck. In Compounded, players take on the roles of lab managers, hastily competing to complete the most compounds before they are completed by others – or destroyed in an explosion. Some compounds are flammable and will grow more and more volatile over time; take too long to gather the necessary elements for those compounds and a lot of hard work will soon be scattered across the lab.

It’s like Monopoly meets mad science. And did I mention there are explosions involved? Compounded is a quirky, interesting project, but I’m not the only one who thinks that’s a good thing. It’s already surpassed its funding goals, with nearly 1200 would-be scientists looking to get to work in the lab. Want to join them? Visit the Kickstarter page here.

Found some Kickstarter gems of your own? Let us know in the comments below.

Breanna has been gaming since infancy, if gnawing on an unattended controller counts as playing a game. One of the younger members of the Gaming Trend family, she dabbled in PC games as a kid but wasn't fully consumed by the hobby until the sixth generation of consoles. Now an avid PC and console gamer, she looks forward to the day when she can scape together enough cash to join the next gen club. In the last week of middle school, a math teacher taught her how to program a calculator; she was pretty much hooked then and there. Currently working towards a degree in Computer Science and Applied Math, Breanna hope to someday make games instead of just writing about them. Other hobbies include playing guitar, binge-watching Netflix, and cooking delicious food.
Related Articles: Culture, Tabletop
Share
Tweet
Share
Submit