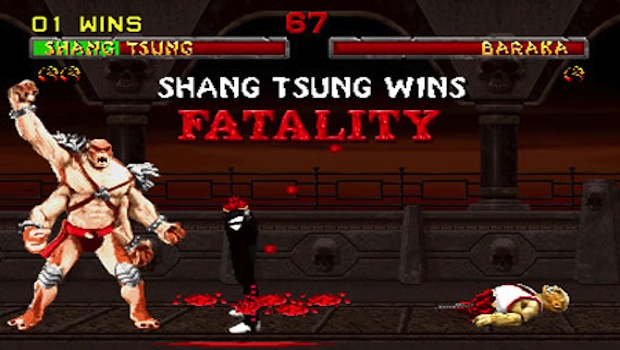 This week at the Game Developers Conference in San Francisco, Mike Capps, the illustrious former president of Epic Games, held a panel to discuss the fact that a lot of powerful people would like nothing better than the banishment of explicit games, and what industry figures can to do to curb that problem. Participating in the discussion along with Capps were Ian Bogost, a professor at Georgia Tech, and Daniel Greenberg, an RPG designer and game scripter, with numerous projects including work for The Walt Disney Company.

In a recent meeting between major industry players (including Capps) and Joe Biden, the Vice President made it clear that he wanted the help and cooperation of the gaming industry, not antagonism (as someone like Mitt Romney or Paul Ryan undoubtedly would have pursued, had they been elected). The meeting was spurred by the December massacre in Newtown, CT, where Adam Lanza, an avid gamer by chance, killed 20 first graders and six educators in cold blood, along with his own mother. The tragedy brought the debate over violent games to the forefront once more, but Biden adopted an admirably level-headed approach during the January meeting: his demands were not for muzzling, bans, or a “sin tax” for M-rated titles (such as the one proposed by Republican lawmaker DebraLee Hovey, whose district includes Newtown) but facts. The problem is, hardly any scientific research exists regarding the connection (or lack thereof) between violent gaming and violent behavior, and the cases where lunatics were also gamers seem to be purely coincidental, with a link that is tenuous at best. Yes, Anders Breivik claimed to have trained for countless hours on Call of Duty prior to his massacre of Norwegian students attending a political summer camp on Utøya Island, and yes, Lanza sequestered himself in a windowless basement room playing the same game for days on end – but how many other kids and adults can claim the same, without ever having seen a gun in real life, or having had a hurtful impulse in their entire lives?

It stands to reason that A) games are ubiquitous in our modernized, tech-oriented society, evidenced by the fact that the human race spends 3 billion hours a week playing them, and B) the vast majority of video game enthusiasts are about as gentle as can be. However, this was not the precise issue that Capps and co. were hoping to address at the GDC panel. The matter at hand was how to change the perception of games, which I think we can all admit will be no easy feat A) considering the number of ignoramuses out there who have never even touched a controller, yet hasten to judge a massive section of the human population who have and B) a lot of games are very violent – no one is denying that – but as gameindustry.biz’s Brendan Sinclair points out, “violent video games” is about as redundant a phrase as “sweet candy,” “short-sighted Republicans,” or “small-organed NRA members.” It’s just something that we can already glean from the noun without the assistance of the adjective. This is part of the problem, however, as Bogost pointed out during the discussion; we know that a lot of games are violent, and that phrase can be redundant, but they are far from being the only offerings, and I’m sure we all have at least a few bloodless games in our collections. They’re really not that rare, but uninformed people think they are, and therein lies a big part of the problem. Bogost urged those in attendance to explore a wider variety of games in order to shift the reputation towards the positive, with a potential focus on educational games, or ones that encourage creativity or artistic ability.

Capps placed the emphasis on a change that needs to take place within the gamer community, claiming that cooperation, empathy, and mutual understanding was an important part of attaining their goal. Business execs who play mobile games constantly on their commute (for instance) would shudder to identify with what they consider to be true “gamers,” i.e. that bepimpled manchild who still lives with his mom and looks like Comic Book Guy, eating cheese puffs and playing World of Warcraft for a solid week in his basement, but I would go so far as to say that this much-maligned subspecies constitutes a rather small minority of the community at large. In other words, if people who play games were more comfortable with the term “gamer” being applied to themselves, the perception of gamers at large could change considerably to include all types of people who enjoy them.

There are ways to turn the reputation around, but it would bear to reason that there will always be some people who remain beyond convincing, and to them we shall say good night, and good luck. But for the rest of the public who don’t mind accepting new evidence and trends as a way to further their understanding of the world around them, there is plenty that gamers and developers alike are capable of doing to help them along, although interference from the financially insurmountable gun lobby constitutes a formidable opponent to meaningful legislation involving games, as Capps took care to point out, but with more big-name publishers joining the fight, and more gamers becoming aware of the problem, things could start to take a turn for the better.

Sam is an aspiring novelist who spends his days handling tech support for a Manhattan-based website called streeteasy.com. Despite living in Brooklyn and being a white twenty-something who likes to think he's got some sort of creative talent, he hopes to avoid being pigeon-holed, because we are all beautiful snowflakes. He has come to Gaming Trend with the intent of improving his writing by way of a deep and abiding love for PC gaming, but hopes to let consoles into his life just as soon as his pockets become a bit deeper. He and his wife can often be found wandering around Central Park, where they enjoy making fun of people who resemble their own dogs.
Related Articles: GDC
Share
Tweet
Share
Submit