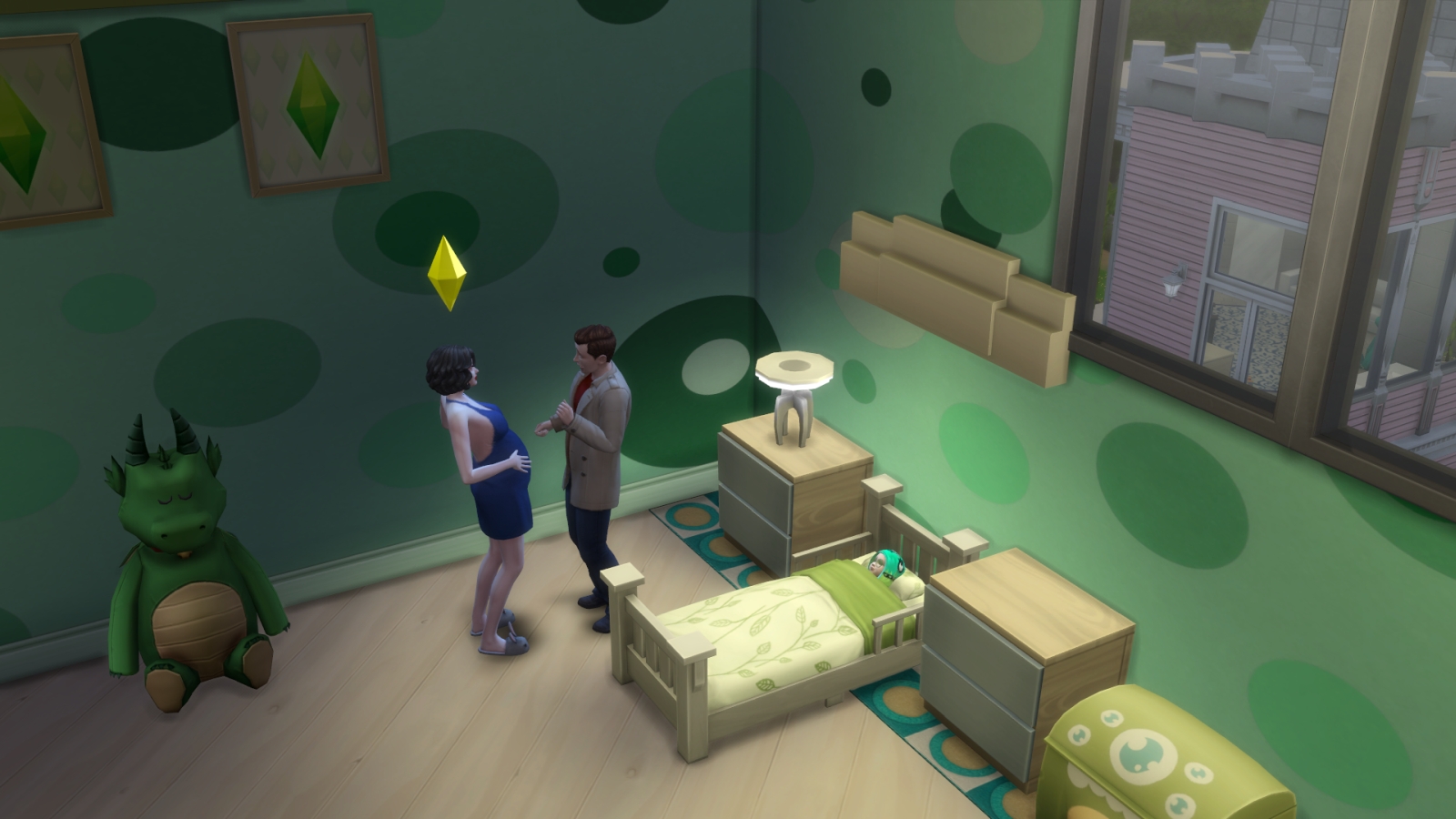 It’s been a while since I played my Sims 4 Disney Princess Challenge, and I am long overdue for an update! Last update I posted was just after Snow White married Prince Charming and moved into a huge “castle” I downloaded from the Gallery. The main goal of Snow White’s part of the challenge is to have 7 children, and each of those children must have a negative trait, the same father, and achieve something before they become a teenager. And hoooo boy, it is already off to a horrible start!

I decided to make my first-born child Cinderella, which will be the princess that carries on into the next challenge, which is…you guessed it…Cinderella. I gave her the Independent trait, hoping that it would mean I would have to spend less time caring for her, since I was going to have 7 kids to watch over. Man, was I wrong. This child is evil in its purest form. 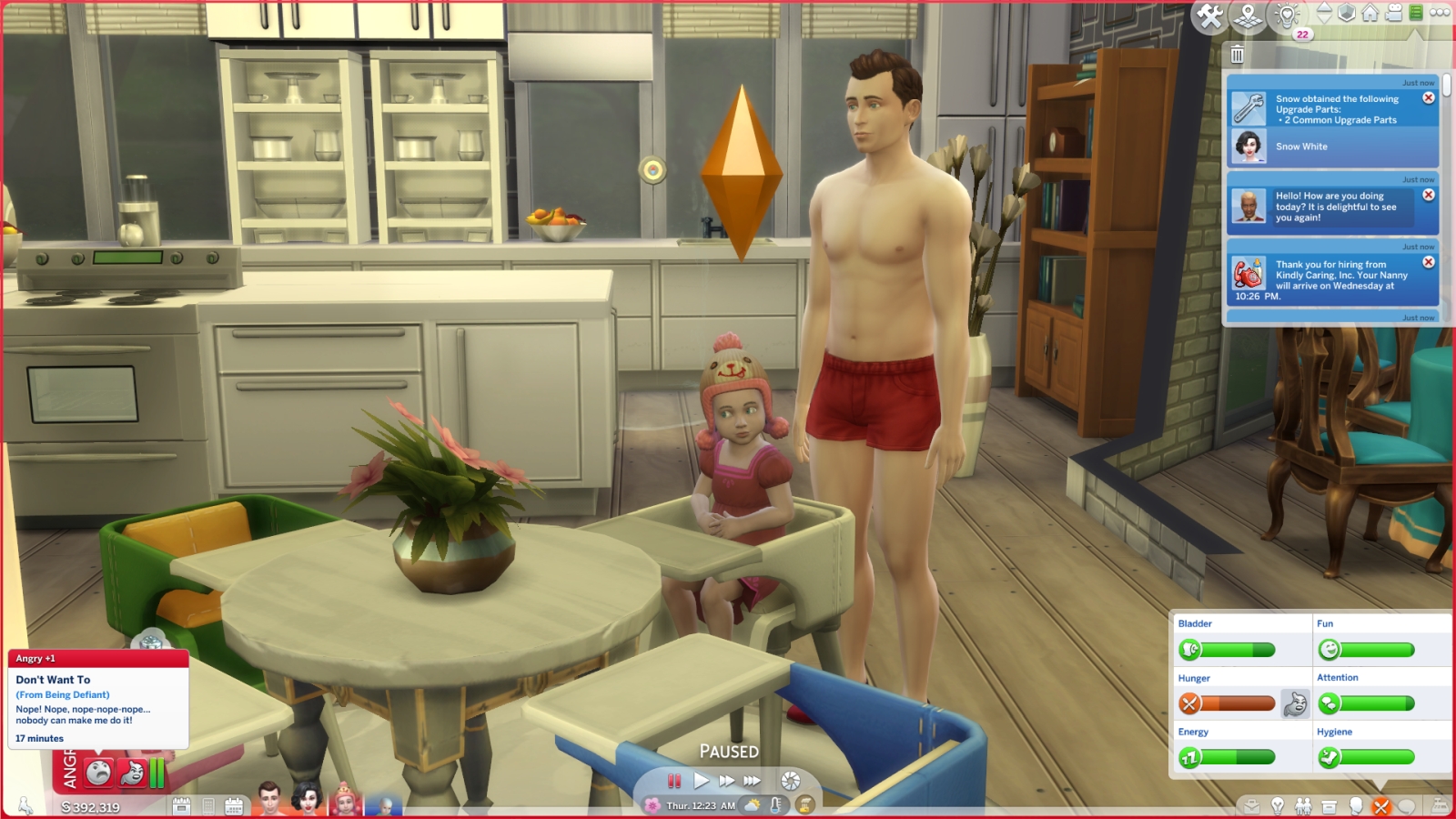 Cinderella is ALWAYS mad, and always defying her parents. The attitude on her face says it all!

Cinderella goes out of her way to do everything to defy Snow White and Prince Charming. She destroyed every room she walked into, and even struggled for close to two in-game hours to crawl across the house and climb THREE sets of stairs to creepily watch us sleep before she decided to throw paint all over the floor right beside our bed. Honestly, I am glad she didn’t murder us in our sleep, because she is quite often angry and hobbles into our bedroom to just laugh and watch us while we sleep. Not. Creepy. At. All. 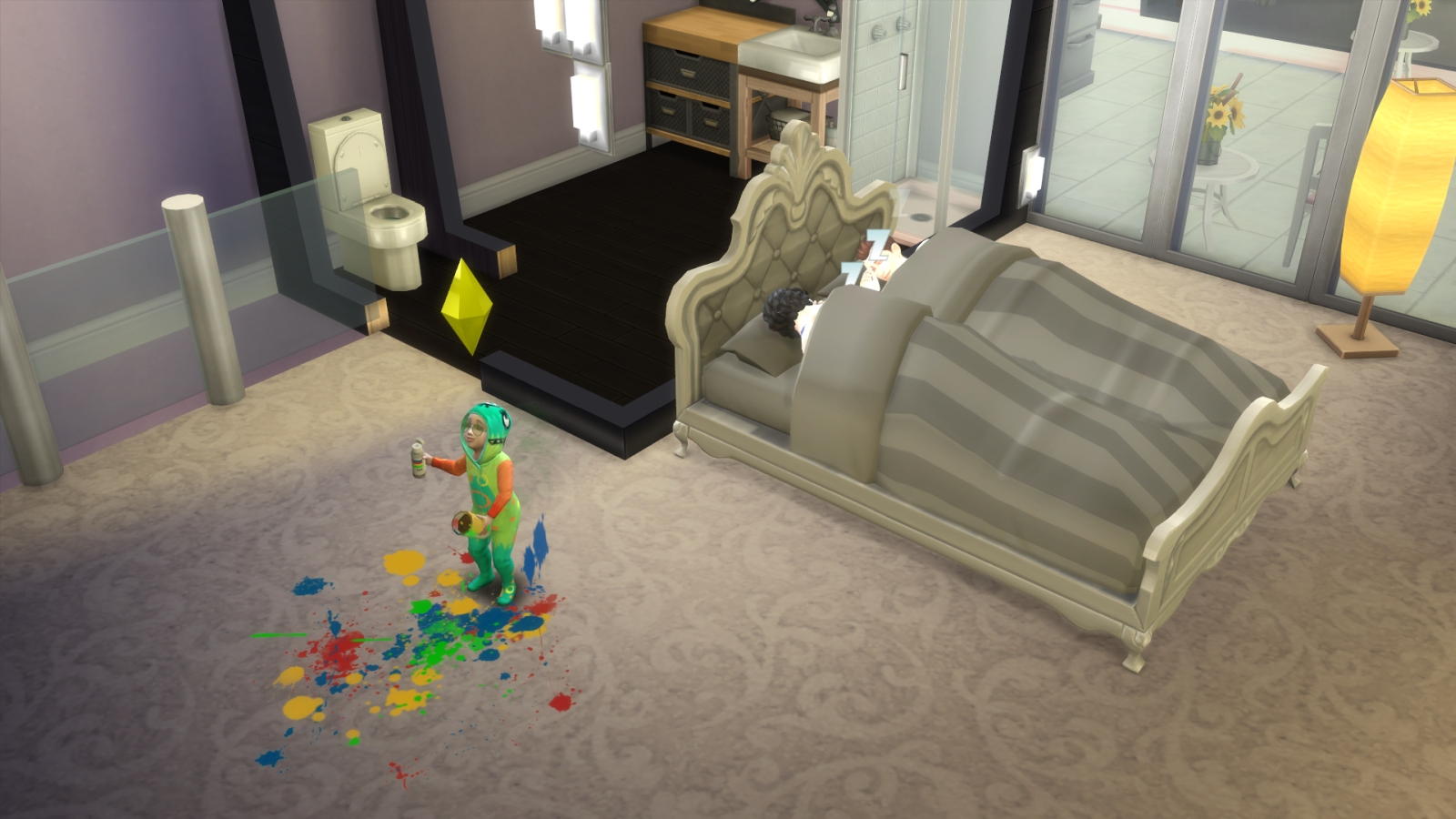 Cinderella frequently watches my Sims while they sleep when she’s angry. This time she went out of her way to come trash their carpet.

My poor adult Sims are constantly tired with frustrated moodlets from this demon child. Snow White has nothing but positive and cheerful traits, and even she has had enough of this kid. I am going to have to downsize the house, because it is massive and takes way too long to navigate, so I almost always have a Nanny on-site to care for the other kids, while Charming and Snow try to mitigate the damage from my little serial killer. The Nanny is all but useless in a house this size, and most of the time my newborns are covered in green clouds of filth and hungry because the Nanny would rather cook or watch TV than help us. 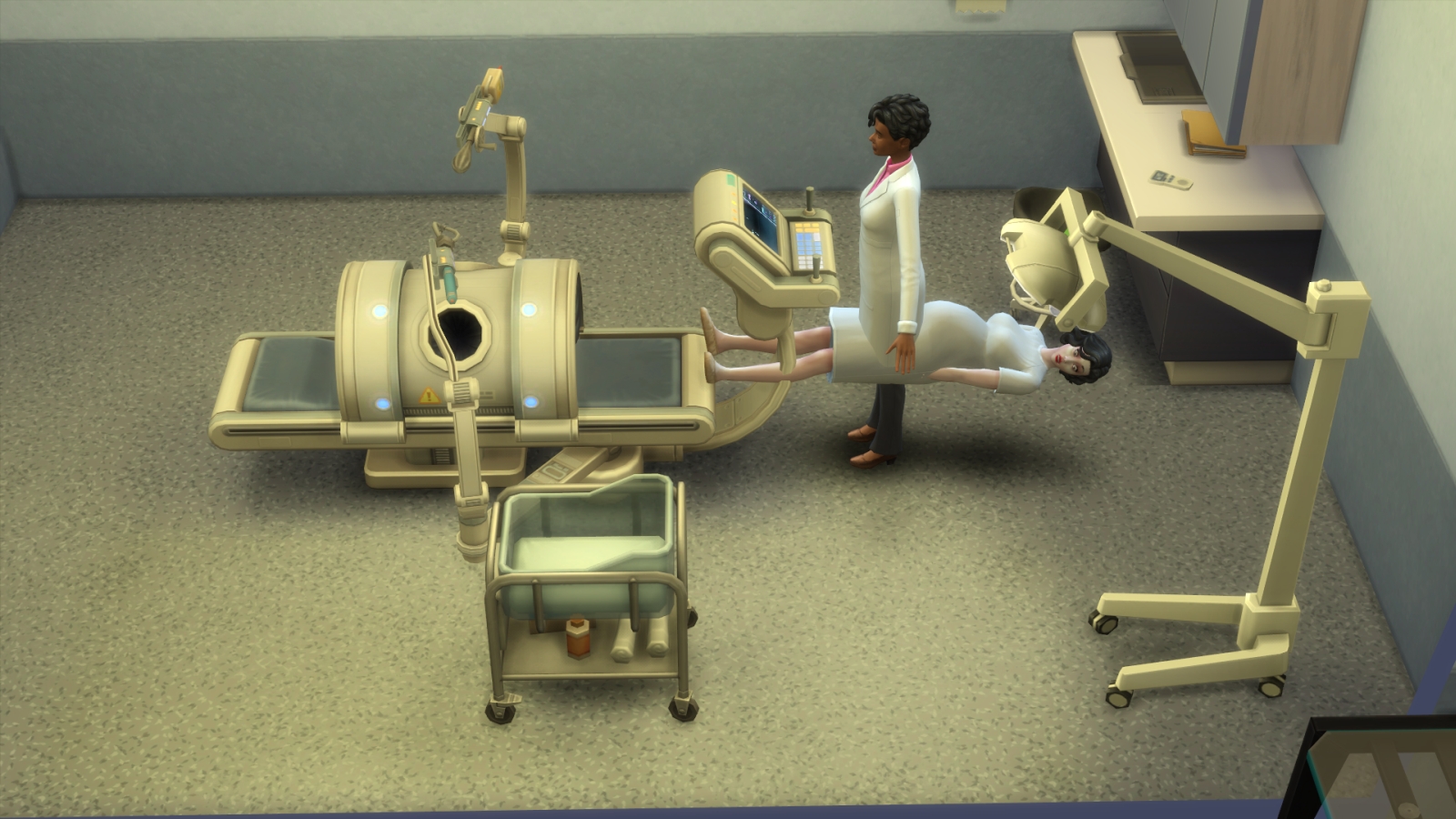 What is actually going on here? Is she delivering a baby, or having an exorcism?!

In this latest play session, Snow was pregnant with her 3rd baby. So far I have Cinderella, Happy, and was pregnant with Sleepy. This was the first time I successfully delivered my child at a hospital in The Sims 4. Every time I tried in the past, it crashed my game for some reason, so this was the first time that I got to see what that experience was like. Prince Charming decided to bust out into a dance on the waiting room floor while I was checking in, and all my best friends rushed in to support me. That was super cool, because shortly after I started to give birth I apparently became possessed and started flying around the table in weird angles. Not sure if this is a normal thing for The Sims 4, since this was my first time in the hospital, but it’s on par with how crazy life has been for Snow White so far. 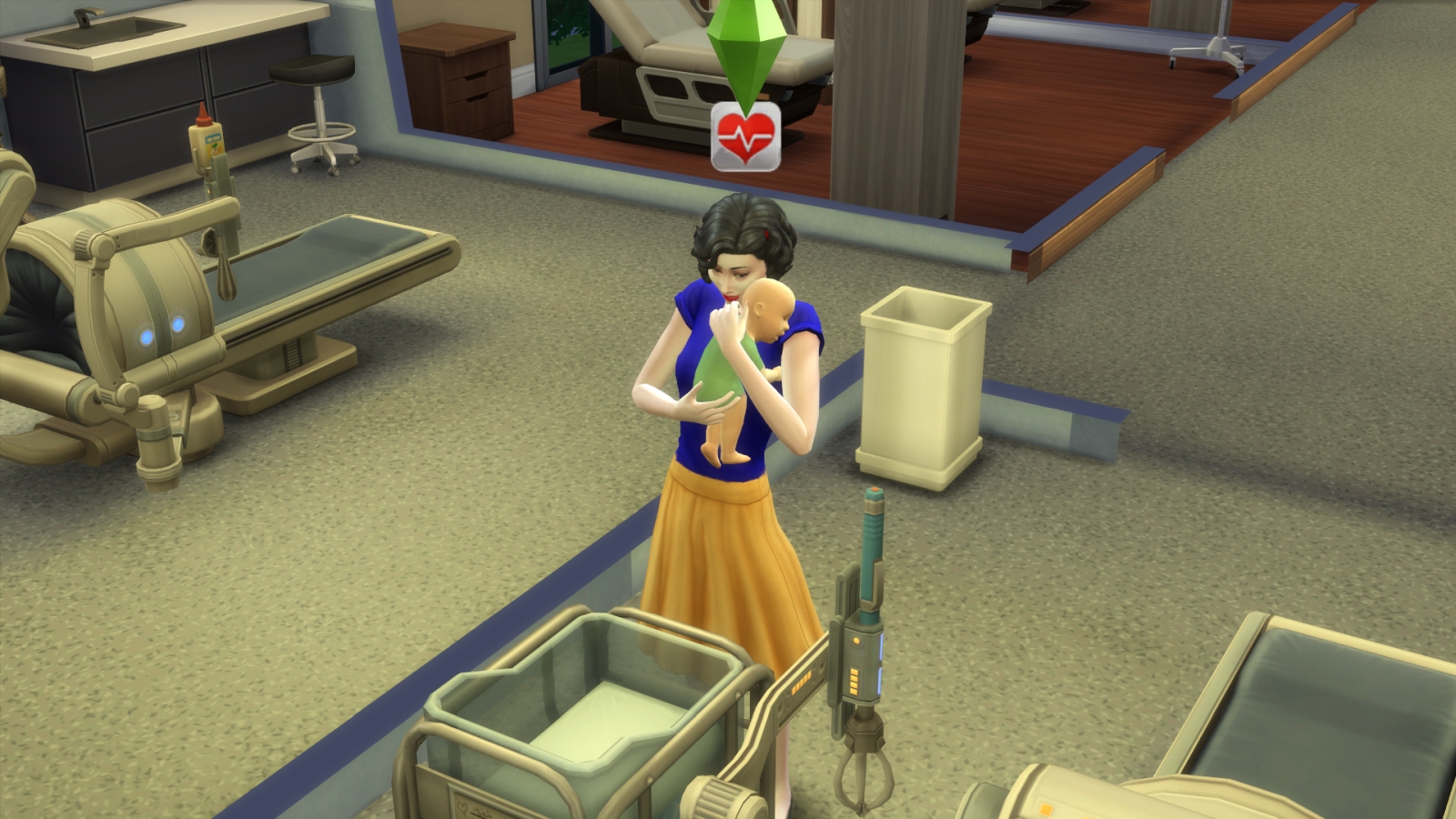 One of the only good and pure moments of my play session, Snow White snuggling Sleepy just after giving birth.

After giving birth to Sleepy, and having a super adorable moment in the hospital cuddling with him, they tossed me out into the street in my hospital gown. Keeping up with the trend of stressful things happening to poor Snow, as soon as she walked in the door from the hospital, she caught on fire while trying to cook a meal in the kitchen, hospital gown and all! Thankfully Prince Charming was quick with the extinguisher and saved the day, and the firefighters showed up shortly after to help. This was also a reminder why I ALWAYS save my game frequently! 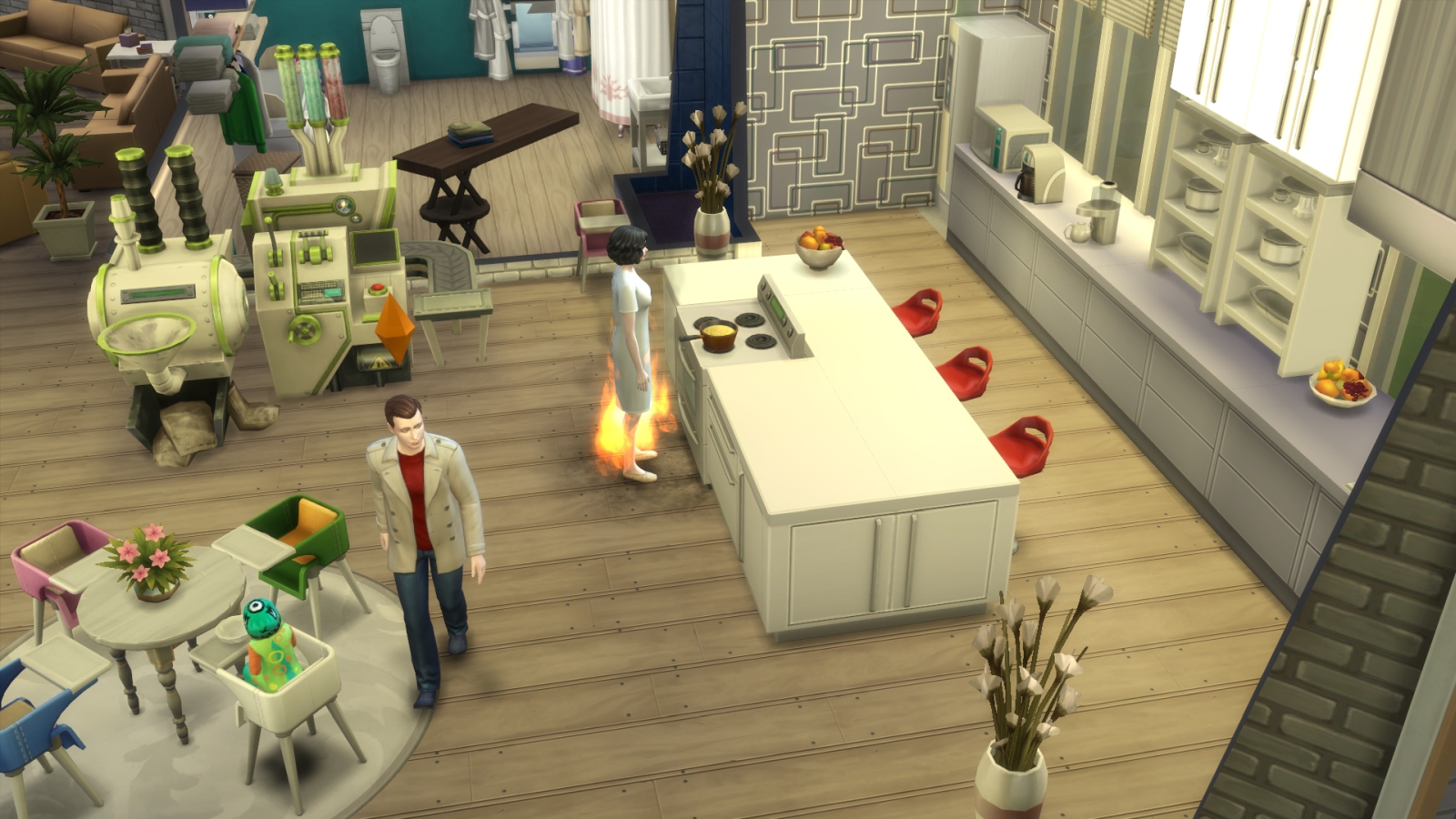 Snow White caught on fire moments after walking in the door with her newborn. On par with how things have been going!

Before I ended my play session, I noticed Cinderella angrily watching over the new baby we just brought home. She has no good intentions, I am sure of it. Do I cut my losses and let CPS take her away for “neglect” and start over with a new “Cinderella” that hopefully isn’t from the depths of Hell? My Sims are constantly stressed out over her. I have always hated infants and toddlers in The Sims 4, and this is really challenging me as a player, that’s for sure!

I think my first goal for my next session is to downsize this massive castle I am living in. I am usually a fan of smaller dwellings because they are easier to manage and navigate. I really wanted Snow White to have her “Happily Ever After” with her Prince and her big castle after surviving so long with the abusive Evil Queen, but this whole situation is trying my patience. The poor thing is already pregnant with baby number 4 in less than three hours after coming home from delivering Sleepy. She deserves the best, and I will try to give it to her.

Thank you guys so much for reading about my adventures. I will be sure to post another update soon, hopefully with a much happier family! Let me know if you’d like to see me take on any other The Sims 4 Challenges!

Holly Hudspeth is a best-selling author living in Fort Worth, Texas. She has six published novels to date; The Skyy Huntington Series, which is an epic dark fantasy adventure, and One Small Detail, a stand-alone medieval fantasy. Holly also enjoys writing fan fiction based on her avatars from games such as EverQuest, Elder Scrolls Online, and World of Warcraft. Her first major purchase at the established age of nine was the NES, and she has been gaming ever since. She enjoys fantasy games, city builders, RPGs, MMOs, SMITE, and The Sims franchise. Most nights she is in SMITE with her husband and friends, or playing ESO. When she isn't gaming, she is probably either at Disney or planning her next trip there.
Related Articles: The Sims 4
Share
Tweet
Share
Submit