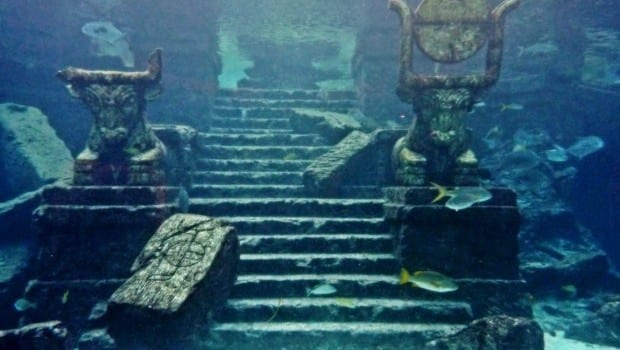 We live in an age of ruin, fallen into the shadow of our ancestors. We see examples of their greatness around us: an impossibly beautiful city filled with incredibly powerful weapons–staggering works of beautiful artistry and incredible engineering that eclipses anything we can contemplate. No one knows where they went or why, but the fact remains: the Precursors are lost, and they took their secrets with them.

We see this same story archetype come up time and again in games.  The fact that this story archetype is so ubiquitous leaves us with a few questions: Where do these stories come from? Why does this theme come up so often? What liberties and limitations do this archetype give to writers and designers?

[singlepic id=10367 w=320 h=240 float=left]To start, I’d like to take a moment to define what I’m going to pretentiously name “The Precursor Phenomenon.” Not every sci-fi or fantasy game makes use of it, but those that do almost always have three identifying features. First, there has to be Precursors, some supremely advanced civilization that existed long before the current time. Second, modern technology or magic should be much less advanced. Lastly, the Precursors need to be gone. If there are some Precursors left around, they should be just shadows of their former glory.

To give you an idea of just how ubiquitous this story is by making a list of games that use this setting off the top of my head: Mass Effect, Homeworld, Assassin’s Creed, Metroid, Zelda, Halo, Jak and Daxter, and Galactic Civilizations.   This plot frame is incredibly popular (WARNING: TV Tropes) in modern science fiction and fantasy storytelling, but where does it come from?

[singlepic id=10366 w=320 h=240 float=right]These stories aren’t new; similar stories of a greatness lost have historical precedence.  One of the earliest examples  is the myth of Atlantis, first mentioned in the works of Plato. In his dialogues Timaeus and Criteas, Plato described Atlantis as a wealthy, technologically advanced civilization that was destroyed several thousand years before his time. Where have we heard that story before?

Well, as it turns out, there is evidence to indicate that the lost city of Atlantis might have been based upon the destroyed Minoan civilization. Predating Plato by about 1000 years, Minoan civilization was so advanced that it had multi-story buildings and hot/cold plumbing. The Minoan settlements were apparently abandoned soon after a massive volcanic eruption, but their buildings were occupied by the ancestors of the ancient Greeks. This fits right into the story we all know.

[singlepic id=10369 w=320 h=240 float=left]If the Minoans were the Precursors for the Classical Greeks, then the Romans were the Precursors of modern Europe. At its peak, the Roman empire spread across huge swaths of the European and Mediterranean world. Waves of Roman invasion and conquest flooded across Western Europe and Great Britain throughout classical antiquity. When the Roman tides eventually receded as the Empire splintered and collapsed around 400 A.D., Europe fell into what we now call the “Dark Ages.” Without the massive Roman state to fund engineering and infrastructure projects, European technology wouldn’t start surpassing Roman until the 12th century—nearly 7 centuries later! During that time, however, evidence of Roman greatness was spread all throughout Europe—roads, aqueducts, even massive fortifications. The Romans had gone, but they had left their great works for all to see.

As you can see, there is some historical precedence for the concept of Precursors. But now that we know where these Precursor stories come from, why does this form capture writers and game designers to such a great extent? The answer is simple utility. Framing a game’s story this way allows for the story to smoothly integrate into the gameplay.

First, consider the story of a game. Nearly every story in every game requires the player to move to a specified location to do a specified task. The trick is convincing a player to proceed, and not every game does it elegantly. In games that use a Precursor background, all the storyteller has to do is describe an ancient Precursor artifact that will decide the fate of the world, or would be deadly in the wrong hands, etc. The Halo rings in Halo: Combat Evolved, the Progenitor ships in Homeworld 2, and The Pieces of Eden in the Assassin’s Creed games are particularly obvious examples. The items themselves might be macguffins, but they tie the environment and the story to the gameplay.[singlepic id=10368 w=320 h=240 float=right]

The other major reason that game designers might invoke Precursors when creating their game is to add variety, both in the design environment and in the gameplay. In the Jak and Daxter series, Precursor technology is used to explain the fast-travel system. If that kind of teleportation technology existed, why would anybody walk anywhere? Simple answer: because the Precursors won’t share it with mundane folks. The same holds true in Mass Effect. These decisions limit the players ability to travel in a way that feels more authentic than “because we said so.” In the Warhammer 40k universe, all the different weapons available to the player are ancient artifacts, often with specific histories laid out in the game. In Skyrim, the Dwemer clockwork cities and mechanical enemies provide a much needed break from the innumerable Draugr-infested tombs. These additional weapons and locations provide variety.

[singlepic id=10365 w=320 h=240 float=left]Framing a game’s story so that it involves Precursors is a powerful way to tie a game’s story, environment to the gameplay but it definitely comes with some dangers. The biggest pitfall is one that plagues game stories all the time: action plots without character development. The ability to use ancient technological macguffins is certainly powerful, but some games can go too far, focusing on the macguffin instead of the characters. Halo is a great example of this. The story in Halo centers on the Halo rings, not on the characters. It’s a series of events that fail to result in character growth. Mass Effect, on the other hand, deftly avoids this pitfall by balancing epic plot lines with a tight focus on character growth. Other games, like Spec Ops: The Line or The World Ends With You showcase excellent character development without showing any hint of the Precursor narrative.

All this is essentially to say that having an epic backstory dealing with advanced civilizations is no guarantee that a game will have a good story. The Precursor narrative can be used to provide a framework to hang a story on, but that story still needs to be worth telling.

Addie grew up near Detroit. After studying Cell Biology at the University of Michigan and spending a year looking into microscopes, Addie decided to volunteer--playing video games. hobbies run from gaming to music (voice, bass, guitar) to rugby. Addie is a strong supporter of indie and low-cost gaming, an area she thinks is underserved by the media.
Related Articles: Assassin's Creed III, Halo 4, Homeworld, Jak and Daxter: The Precursor Legacy, Mass Effect 3, Metroid Prime
Share
Tweet
Share
Submit