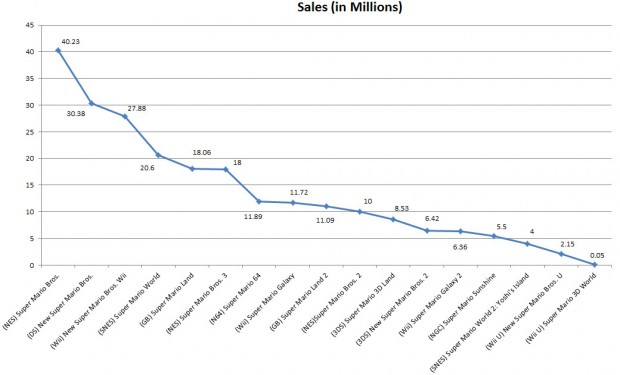 It’s not shocking that Super Mario 3D World is performing below expecations given the meager install base of the Wii U, plus new consoles from Microsoft and Sony releasing in the same time frame. Despite the doom and gloom that’s been surrounding Nintendo in the media, Nintendo is not in bad shape as whole. The 3DS is performing well and 2013 has proved to be one of the best years ever for a Nintendo platform. All in all, Nintendo is still a profitable company.

Still, to see a flagship Mario title end up a commercial flop is hard to stomach. It’s never happened before, at least not in terms of traditional releases (I’ve not accounted for re-releases). Take a look at the sales chart below which tracks sales of every core game in the Mario series starting from the original game on the NES:

Thanks to hardware bundles, Super Mario Bros. U managed to garner over two million in sales. Standing on its own, 3D World has moved less than half a million units worldwide since its release nearly a month ago. It’s very possible that Nintendo could announce a significant price drop on the Wii U and include 3D World as part of a bundle, which would undoubtedly generate a spike in sales. As it stands, and as someone who has been playing Mario games since the days of the NES, it’s a bit alarming to see a Mario game going mostly unnoticed within the wider community.

There are plenty of people calling for Nintendo to exit the hardware business (at least console hardware, not necessarily portables) and focus solely on developing games. Even though I hated the Wii last generation, I was never behind the “exit” argument because I still felt that there was a place in the world for a Nintendo console. I love that Nintendo’s underlying philosophy is about making games that anyone, regardless of what demographic they’re a part of, can enjoy and have fun with.

But looking at the numbers, it’s plain to see that things are different now. Even though the Nintendo 64 got its ass kicked by the PlayStation, and the GameCube got trounced by the Xbox and PS2, people still flocked to the new Mario games in droves. In the case of Super Mario 3D World, the industry is the largest its ever been, with millions of new people playing video games compared to just five years ago, and yet it’s the worst selling game in the series (again, things may pick up if Nintendo uses a hardware price drop/bundle strategy).

I want more people to play Super Mario 3D World. It’s a brilliant, imaginative game that deserves to be experienced by the masses. The question is, what will it take to make that happen? 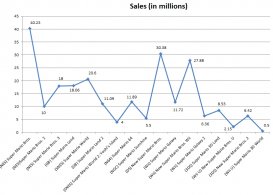