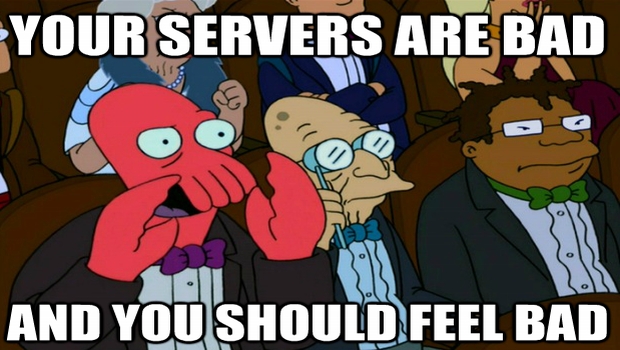 It’s been an interesting launch for EA and Maxis these last few days. After opening to several glowing reviews, judging the game on it’s optimal play experience, the truth itself has finally been revealed: EA was woefully unprepared for the launch of SimCity. See, SimCity requires an constant internect connection, due to the multiplayer connectivity and online focus of the latest version of the city-planning simulator.

Our own experience with the beta was largely positive, and yet, we couldn’t sink the nagging feeling that the server issues we experienced — forcing players to wait thirty minutes to play a largely single-player game — would rear its head again in the final product. Surely, EA would learn from the mistakes of Blizzard — whose botched launch is still remembered almost a year after release — and make sure that their game wouldn’t suffer from the same issues.

As it turns out, nothing was learned.

SimCity’s servers are being slammed, forcing long wait times, followed up with either lost progress, or a complete inability to even access the game at all. Our own review process has been hindered by these insurmountable server issues. Last night I tried to jump online and was able to access the tutorial mission, but none of the buttons worked, and all I could do was watch my starter city slowly hemorrhage money. Ron, our own editor-in-chief, and the guy who’s actually going to be reviewing the game, couldn’t even get that far.

It’s gotten to the point that the senior producer of the game has announced that certain features will be shut-off, just to make the game work properly. Even now, with these supposed fixes, I’m currently in a queue, waiting almost 20 minutes just for a chance to see if it will maybe, possibly work.

This is absurd. And it would appear, Amazon has noticed.

If you go to the Amazon store page for the game, and try to order a direct download copy, you’ll notice you’re currently unable to do so. Amazon has turned off the ability to purchase the download of the game, giving prospective customers a “Currently Unavailable” sign until EA gets their shit together:

Important Note on “SimCity”
Many customers are having issues connecting to the “SimCity” servers. EA is actively working to resolve these issues, but at this time we do not know when the issue will be fixed. Please visit https://help.ea.com/en/simcity/simcity for more information.

Good for Amazon for turning off EA’s ability to siphon more money for a broken product. Companies should be held responsible for these sorts of things, and EA shouldn’t get a free pass for this. What happened to Hammerpoint’s The War Z should happen to EA’s SimCity — a complete de-listing, refunds for everyone who wants one, and to bring the product back when it’s guaranteed to work.

Our review will go live as soon as we are able to spend enough time on the game to make an honest assessment of the product in full. Our current experiences will go into the review, and inform it. It would be irresponsible for us not to. The game may be a blast, but it’s pointless if no one can actually play the game.

So, right now, approach SimCity as if it were flashing a giant “BUYER BEWARE” sign in neon letters right on the box. Because you should know exactly what you’re getting into.

Well, it would appear that the countdown is almost at zero. Time to see if I can actually play the game.

I've been gaming since my dad made the bad decision of buying me a Nintendo when I was four years old. Every day I'd find myself with my face glued to a TV screen, punching away at buttons, getting furious with Bowser, Dr. Wily, and those freakin' birds in Ninja Gaiden. Since then I have failed to get my parents to play any board game with me, I sold my full copy of Earthbound with box and guide for $300 to some dude in Austria for rent money, and I still believe in Nintendo even after all these years.
Related Articles: SimCity
Share
Tweet
Share
Submit