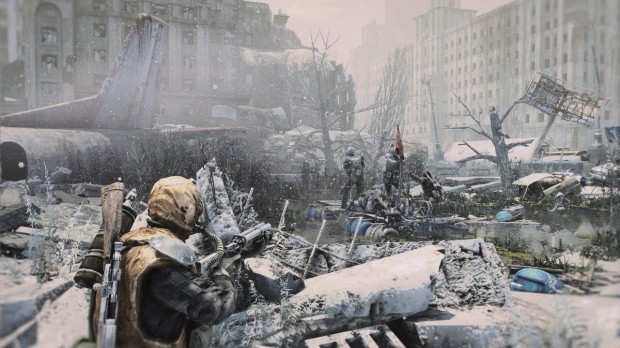 Andrew Prokhorov, the creative director of 4A Games, came out with a statement yesterday in response to semi-criticism from former THQ president Jason Rubin, who wrote a detailed report exposing subpar working conditions after making a visit to 4A’s studio in Kiev, Ukraine.

Having lived in Russia myself, it comes as no surprise that inadequate heating was one of the main concerns mentioned, along with developers often having to work in cramped quarters for long hours during the development of the admittedly phenomenal Metro series, with this report focusing on the months spent working on Last Light. Prokhorov, who unfortunately does not have the same financial resources as another man who shares his last name, explained in his statement (found here in the comments section of the gamesindustry.biz article by Jason Rubin) that although developers in Ukraine are no less passionate about their craft, they do not have access to nearly as many comforts as those operating in the U.S. (or Sweden, for instance); every time they needed a top-of-the-line PC or other high-value goods, someone had to fly to the United States and literally smuggle it home in a backpack. He was very complimentary of Jason Rubin, however, who became president of the doomed THQ in 2012 and made a visit to Ukraine just two weeks later to try and find a solution.

Ultimately, I think Prokhorov comes off in his post as someone who feels a great deal of pride for the work that his team put in to make this game a reality, and based on initial reports, the final product is polished, challenging, and downright artful. I think my favorite quote from the comment is this:

We deserve the ratings we get. After all, the final consumer doesn’t care about our conditions. And this is RIGHT. We need no indulgence.

You can practically picture Prokhorov declaring this in a booming, Lenin-like voice as a Ukrainian flag flutters in the background and an apocalyptic blizzard bears down on the city. I mean, I don’t think gamers want people to freeze to death while their favorite titles get made, but he is right about the final product being greater than the sum of its suffering. Rubin included some golden nuggets in his article as well, such as, “The only thing for which 4A is getting more credit than I think they deserve is the creativity behind the ever frightening, dark, post apocalyptic environment of the game. I’ve been in Kiev to visit the team, so I know they just stepped outside for reference.”

At any rate, maybe this will finally give 4A the clout to move to some nicer digs, i.e. with real desk chairs and something sturdier than a card table to work on, but it kind of fits into a pretty cool starving artist lifestyle that I feel gives the game a rougher edge, something more realistic about it, especially given the bleak content. I mean, when was the last time someone at Infinity Ward got shot at? Never. When was the last time someone at 4A Games traded bullets for food and trudged to work through a frozen wasteland – maybe a couple months ago?

I’m just kidding, Kiev is beautiful, but you know what I mean. Metro: Last Light was released on May 14th, 2013, and is now available on Xbox 360, Playstation 3, and PC via Steam.

Sam is an aspiring novelist who spends his days handling tech support for a Manhattan-based website called streeteasy.com. Despite living in Brooklyn and being a white twenty-something who likes to think he's got some sort of creative talent, he hopes to avoid being pigeon-holed, because we are all beautiful snowflakes. He has come to Gaming Trend with the intent of improving his writing by way of a deep and abiding love for PC gaming, but hopes to let consoles into his life just as soon as his pockets become a bit deeper. He and his wife can often be found wandering around Central Park, where they enjoy making fun of people who resemble their own dogs.
Related Articles: Industry, Metro: Last Light
Share
Tweet
Share
Submit