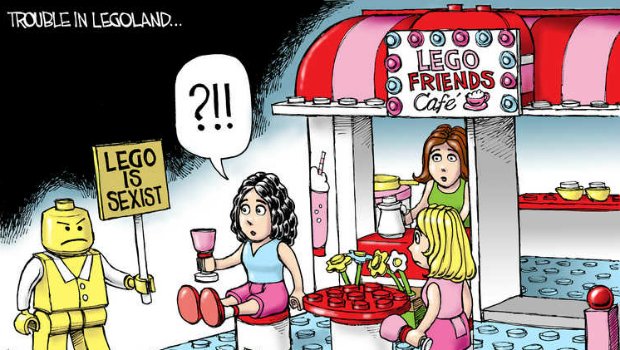 Warner Bros. Interactive Entertainment has announced plans for an upcoming title in their Lego line of video games, according to a press release from the company.  Aimed at young girls, the upcoming video game Lego Friends, to be released this fall for the Nintendo DS and 3DS systems, takes it’s shape from the controversial Lego line of girl’s toys by the same name.  With it’s pastel colors, “horse academy”, and slender, longer “minifigs”, Lego Friends begs the question: Is a Lego set aimed directly at young girls simply an attempt to gain an uninterested market or another sexist foray into corporate insensitivity?

“We are very proud to welcome even more girls into the world of LEGO videogames with a title based on the best-selling LEGO Friends line,” said Tom Stone, Managing Director of TT Games, the company responsible for the popular Lego Star Wars and Lego Batman franchises. “LEGO Friends allows players to build personal fun adventure while expressing their individual style and personality along the way.”  That statement sounds fair, but the details about the gameplay and structure of the game paint an entirely different picture.  Players are given a list of “girly” options such as soccer playing, choreographic dance, and of course, shopping!  Pastel colors dominate the landscape of the fictional town of Heartlake City (what sounds like a demonic lake of still-beating hearts in Utah) and the entire purpose of the game is to impress your friends enough (by making yourself useful to them) to throw THEM a celebration at the end, because you know, all that hard work you put in was because other people are more important than you.

While young boys interested in Lego titles get to play as Force-wielding Jedi or superhero Batmans, fighting and powering your way through big-time events and becoming the hero, the girls of the Lego universe are relegated to dancing and shopping to their hearts content.  The concept that the girls only chance to make “friends” who actually like them is to constantly be doing them favors and helping them succeed their goals, only to ultimately be able to celebrate the others instead of themselves plays a lot like a warning to young girls about the unappreciated nature of motherhood.  Are you a girl who wants to be a superhero Jedi who flies spaceships with Indiana Jones and a couple of the famous Bionicles, heroically fighting hordes of space-creatures and doing so without worrying about your hairstyle or your dog grooming bill?  Too bad, sweetheart, get your ass down to the Butterfly Beauty Shop and do some hair like you’re supposed to.

That said, the generations of Lego toys and video games from before have suffered from a lack of female interest.  Many of the masculine heroes and playsets have had little appeal to young girls, and the Lego Friends playsets have done wonders to establish a connection between the company and their desired customer base.  According to the Guardian, “The world-famous plastic brick maker said net profit rose 35% to 2bn kroner (£213m) in the first six months of 2012, from 1.48bn kroner for the same period last year. Sales rose 24% to Kr9.1bn, spurred by the success of the Lego Friends Line.”  Such a drastic rise not only shows that the toys are popular, but that the toy line, gender stereotype enforcing as it may be, is really working to allow long-term interest for Legos in young girls.  It is unknown whether the same success will translate to the video game market, another poor draw for the young girl demographic.

Abi Moore, co-founder of Pink Stinks, a campaign group dedicated to raising concerns over gender stereotypes, said “It’s not surprising that profits are up, but they probably are for toy makers who are gender-stereotyping everything in sight.” She added: “We want toys that offer all sorts of opportunities to all children. We think that cupcakes, parties and having everything revolve around leisure is just tiresome and heavily stereotyped.”

What do you think?  Do you think that by separating girls into their own category we reinforce our gender gap, or does it show inclusion in a male dominated toy market?  Would you buy this upcoming game or any of the playsets for your daughter or niece?  The market will do it’s part to answer these questions.  LEGO Friends is being developed by TT Games, in partnership with Hellbent Games, and is slated for a fall 2013 release. For more information, please visit: www.LEGO.com/videogames.

Patrick Rost has been with Gaming Trend since 2013. At first focused on sports coverage, Patrick has gone on to cover a wide range of games and other products for the website. Outside of Gaming Trend, Patrick writes and records music, grinds perpetually in Elder Scrolls Online (PS4), and lives day to day with his two dogs, Bob and Stella.
Related Articles: Lego Friends
Share
Tweet
Share
Submit