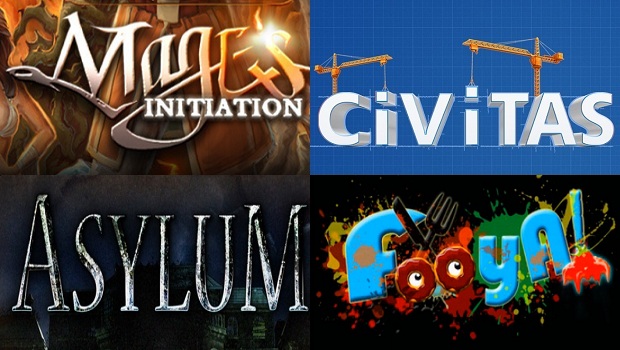 Kickin’ It is almost 1 month old today. They grow up so fast! Not much has changed though; just like last week, Kickin’ It showcases games or gaming-related projects on Kickstarter that deserve special recognition in four distinct categories: Up and coming, a promising project on its way to funding, Underrated, a project with lots of potential but little funding, Updated, a previously funded Kickstarter with a recent progress update, and Unusual, a strange, interesting, or quirky project. Which projects rose to the top this week? Mage’s Initiation, Civitas, Asylum, and Fooya.

Up and Coming – Mage’s Initiation

I like magic. If a start up a new RPG and one of the classes is magic-based, there’s a 95% chance I’ll choose it. And if there’s a game where everyone uses magic…even better! Mage’s Initiation, as its title suggests, is one such game. It’s an adventure/RPG hybrid for that draws on influences from Sierra’s 2D adventure library. Players can choose from four classes of mage (Earth, Air, Water, or Fire) as they embark on their journey.

You assume the role of D’arc, a sixteen-year-old Initiate who must complete a trio of tasks set by his Mage Masters. Journey through the medieval-styled realm of Iginor. Brave a goblin-infested forest. Navigate a vast lake to encounter an evil so pure, not even beauty can disguise it. Ascend to the peaks of Flyteria, a valley of winged warriors once dedicated to protection of the human town.

Succeed and D’arc shall take his place among his fellow Mages.

Fail and nobody shall remember his name.

Himalaya Studios is the force behind the game, and they hope that a little Kickstarter funding will help them make their game a reality for PC, Mac, and Linux  (with iOS and Android stretch goals). It seems like a safe assumption; the game has raised 96% of its funding goal with 18 days to go. Head to the Kickstarter page here to help push them over the edge.

Fans of SimCity and similar city building/management games might be interested in this one. Civitas will be a “revolutionary, open ended, community driven, highly moddable city building game”. Like most games in the genre, Civitas will focus on establishing a city and helping it grow. It will feature both single player and online gameplay, and is aiming for a PC and Mac release.

The very basic flow of the game will follow this design:

That’s right. You can terraform the land, shaping rivers, mountains, and landforms to your hearts desire. Civitas’ Kickstarter is only a few days old, with 28 days left to reach an ambition $250,000 goal. You can visit their page here to learn more or help out.

Remember Asylum, the game from Meridian4’s Agustín Cordes? We mentioned it in an edition of Kickin’ It a few weeks back, and as of 4 days ago it reached its funding goal. Today they posted a very hearty update, detailing progress on the project and having a look back at the campaign itself. Key highlights of the update:

I was never lucky enough (or unlucky enough, depending on your perspective) to witness a food fight in my school’s cafeteria. But a company called FriendsLearn is trying to make sure everyone gets in on the food flinging action with their game for PC and Mac, Fooya with Friends. The game has a pretty simple premise: go online and engage in a real-time 3D food fight.

Fooya offers players food-derived weapons to combat evil forces in various scenarios.  You win by dodging unhealthy food thrown at you by your enemies, while you run  around to burn calories to improve your health and burst your enemies with the most  greasy, sugary, salty foods you can ﬁnd!

Of course, it’s not all about the fun of it; the game is meant to have a message about combating obesity. Don’t let that scare you off though, based on the demo the game isn’t preachy at all. In fact, it’s surprisingly fun. Check out the Kickstarter page here.

And that’s it for this week. Make sure to check back in a few days for another edition of Kickin’ It.