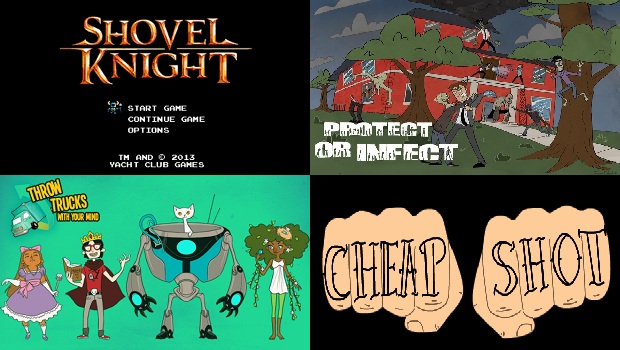 Welcome back to Kickin’ It, you know the drill by now. For those of us who don’t have the cash for an elaborate spring vacation (or whose idea of an elaborate vacation involves tons of gaming), Kickin’ It directs you to games or gaming-related projects on Kickstarter that deserve special recognition in four distinct categories: Up and coming, a promising project on its way to funding, Underrated, a project with lots of potential but little funding, Updated, a previously funded Kickstarter with a recent progress update, and Unusual, a strange, interesting, or quirky project.This week’s stars are Shovel Knight, Protect or Infect, Throw Trucks with Your Mind, and Cheap Shot.

Up and Coming – Shovel Knight

Playing games like Penny Arcade’s On the Rain-slick Precipice of Darkness 3 revived my appreciation for retro-style graphics, which might be part of the reason why Shovel Knight caught my attention. It’s an action/adventure game with 8-bit graphics that draws inspiration from favorites like Mega Man, Castlevania, and Dark Souls. Shovel Knight has all the makings of a classic adventure game, as the hero fights off the baddies to rescue his beloved.

As the Kickstarter page boasts:

If you love games with perfect platforming, beautiful art, infectious music, crazy bosses, and real heart… Shovel Knight is for you! If you don’t, then what? How could you not be into that stuff?

I’m into that stuff, and apparently so are over a thousand backers. Shovel Knight has raised just over a third of its $75,000 goal with 26 days to go. You can shovel some money their way on the game’s Kickstarter page here.

Zombie/infected games have become a genre all of their own, with games like Killing Floor, Left 4 Dead, and Resident Evil leading the craze. The infection is now spreading into the board game world as evidenced by this Kickstarter project. Protect or Infect is a strategy board game for 2-8 players that pits a team of survivors against a horde of zombies for 20 rounds of gameplay in the aftermath of a zombie apocalypse. To win, the survivors need to eliminate all of the zombies or last until rescue arrives. Alternatively, the zombies are declared victorious if all of the survivors are defeated.

The video above gives a good overview of the gameplay, and more details about what’s in the box can be found on the Kickstarter page here. That’s also where you should go to chip in to the campaign….before the zombies eat your BRAAAAINS.

Updated – Throw Trucks with Your Mind

If the zombies haven’t gotten to your brain yet, you’re now one step closer to being able to play Throw Trucks with Your Mind, a project mentioned in a previous Kickin’ It. It’s officially funded as of last week, and a recent update reveals that rewards will begin shipping as soon as early April. The project’s creator, Lat Ware, ran an AmA on Reddit in the final days of the campaign to answer questions about Throw Trucks with Your Mind and the experience of running a Kickstater. A snippet:

The constant stress of Kickstarter’s All-Or-Nothing model means that I can’t afford to take any days off. Everything I do has to drive donations. There is no “close enough.” So, I am doing 3+ hours of tech demos every single day to get word out about this amazing experience. And it feels great when each person plays the game and has this look of pure, childlike delight on their face when they think, “Oh, my god! I just threw a truck with my mind!” But then I look at the amount pledged and I stop feeling great because I’m not at my goal yet. Up until I hit my goal, I will not feel like I’ve done enough.

Phew, sounds like tough work! But luckily it paid off, and hopefully we’ll see the game on shelves soon. Follow its progress here.

I’m the kind of person who thinks sidewalks and hallways need separate lanes for fast and slow walkers. There’s almost nothing quite as frustrating as being forced to halve your pace because the person in front of you is busy texting, chatting, or emulating an elderly turtle with a severe fear of motion. If I’m honest, sometimes the sheer irritation of it makes me want to punch something (or someone). Luckily, the fine folks at Beardo Games are working on an outlet for crowd-induced frustration that won’t result in a long rap sheet of assault charges; it’s called Cheap Shot, and it’s a game about punching people.

The game has already raised most of its modest $3000 goal, with stretch goals like an Ouya release and extra levels announced. With 35 days to go, there’s plenty of time left for you to head here and contribute.

And that’s this week’s Kickin’ It knocked out, zombified, and hit by a flying truck in stunning 8-bit graphics. Tune in next week!