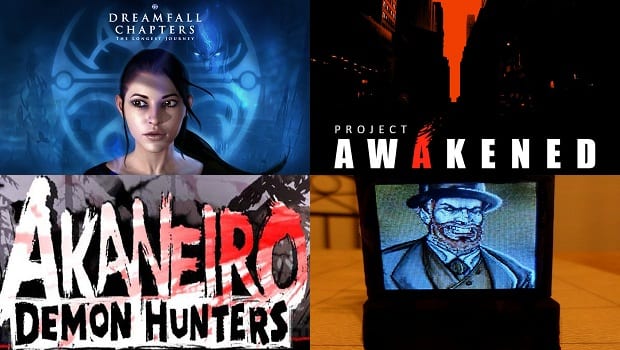 According to the bastion of modern lingo that is Urban Dictionary, to “kick it” is to chill or hang out. Well, that’s exactly what you can do with some of the awesome games mentioned in this post. Just like last week, we’ll be showing off games or gaming-related projects on Kickstarter that deserve special recognition in four distinct categories: Up and coming, a promising project on its way to funding, Underated, a project with lots of potential but little funding, Updated, a previously funded Kickstarter with a recent progress update, and Unusual, a strange, interesting, or quirky project. Who will we kick it with this week? Dreamfall Chapters: The Longest Journey, Project Awakened, Akaneiro: Demon Hunters, and Doppelganger.

Up and Coming – Dreamfall Chapters: The Longest Journey

If it’s true what they say, that the best predictor of future performance is past performance, then there’s two great reasons to have faith in this Kickstarter project: First there was The Longest Journey, an adventure game released in 1999 to massive critical acclaim. The sequel, Dreamfall: The Longest Journey, was released seven years later, recieving a positive response as well. Now, Red Thread Games, including Ragnar Tørnquist and other members of the core team from the first two games, is looking to continue the success with Dreamfall Chapters: The Longest Journey.

With Dreamfall Chapters, we are combining the best parts of The Longest Journey and Dreamfall in order to create what we hope will be the greatest game in the saga so far; a game filled with mature dialogue and challenging puzzles, exciting exploration and intricate investigations, complex and fun characters, thrilling plot twists and a story designed to engage and move players.

Dreamfall Chapters will have the magic, the heart and soul, and the lush, interactive environments of The Longest Journey, filled with things to look at and explore. It will have an interface that harkens back to traditional point-and-click adventures. It will also have the detailed 3D world of Dreamfall, where players can explore and lose themselves in expansive locations and living environments, along with puzzles and challenges that are completely plot-driven and an integral part of the game’s narrative.

The best parts of two great games? This has been long awaited by adventure fans everywhere. It’s no wonder that Dreamfall Chapters: The Longest Journey has already gotten nearly 10000 backers to help out with over $590,000. And there’s still 27 days left for you to join them by visiting the Dreamfall Chapters Kickstarter page here.

We mentioned this project a few days ago when it was announced, but the premise is so darn promising that it warrants mentioning again.

Project Awakened is a modern action game developed in Unreal Engine 4 and it’s key selling point is the ability for gamers to completely customise their characters. Want to play as an “invisible hero who can charm enemies to fight for her”? Or maybe a “man who spontaneously combusts at will and touches everyone to incinerate them”? Both options are equally possible with Project Awakened’s unique character creation system. Rather than a class-based or skill tree system to limit choices, everything is left completely up to you.

Project Awakened contains a modular powers and skill system that allows players to select from a huge number of abilities and combine them in unique ways. Unlike other games which use a class system or skill trees, Project Awakened leaves every choice and ability up the player. Likewise, players will have the opportunity to completely customize the appearance of their characters. Comical or serious, rough or polished, nearly any character imaginable can be created using the Project Awakened Player Creation system. The result is a game with seemingly limitless gameplay and replay potential based on which abilities players choose.

There’s more than a year to go before the project’s estimated release date of August 2014, but there’s only 23 days left to help the project reach it’s goal of $500,000 or more. There’s plenty of stretch goals to go for as well, including multiplayer, co-op, modding support, and more customization options. Check them out here on the Project Awakened Kickstarter page.

Akaneiro: Demon Hunter is a Japanese-inspired MMO action RPG retelling of Little Red Riding Hood that hit its funding goals on Kickstarter last week. It comes from the developers of Alice: Madness Returns, and boasts of deep gameplay and fast-paced combat. Akaneiro has been in development since 2011, and a closed beta has been online since 2012. The beta has been well-recieved, and the game has been officially Greenlit on Steam, which explains how they were able to reach their Kickstarter goals (along with stretch goals for Linux and Ouya versions of the game).  A few days ago they had their first post-success update to share.


Official Akaneiro: Demon Hunters Kickstarter Trailer
In their update, the forces behind Akaneiro: Demon Hunter reveal that the game is actually doing better than expected. Reviews are starting to come in, with many of them comparing Akaneiro to Diablo 3 and giving the titles similar scores. The next phase of development for the game is also underway, including co-op gameplay, Linux and tablet ports, and an improved UI. They estimate that these fixes will take two months or more to complete, but in the meantime there’s plenty to enjoy. Read the full update here and check out the Akaneiro: Demon Hunters website here.

I often wish there were more characters in gaming that I could relate to, particularly as a female. Even for guys, the world of protaganists is so full of tropes that you can probably guess what the main character of a game looks like just by reading the game’s description. While video games have tried to counter that with increasing levels of character customization, as in Project Awakened above, this project looks to bring a level of personalization to the tabletop and board gaming world as well.

Doppelganger is a customizable tabletop game piece with a 1-inch base and a dual-sided LCD screen. Gamers can connect the piece to their PC and transfer images and photos via USB to be shown on the screens. The Doppelganger stores up to 30 different images, and aside from the obvious feature of letting you use your own characters (or your own face!) in board games, the creator of the project Rodney Benesh can see a number of other roles for the device including (but not limited to):

I think it’s a nifty idea. Who wants to play as an iron or even a cat, when you can play as a character completely unique to you? Hundreds of backers agree and you can too.

So that’s another week of Kickin’ It. Were these projects worthy choices? Did I miss anything? Let us know!

Breanna has been gaming since infancy, if gnawing on an unattended controller counts as playing a game. One of the younger members of the Gaming Trend family, she dabbled in PC games as a kid but wasn't fully consumed by the hobby until the sixth generation of consoles. Now an avid PC and console gamer, she looks forward to the day when she can scape together enough cash to join the next gen club. In the last week of middle school, a math teacher taught her how to program a calculator; she was pretty much hooked then and there. Currently working towards a degree in Computer Science and Applied Math, Breanna hope to someday make games instead of just writing about them. Other hobbies include playing guitar, binge-watching Netflix, and cooking delicious food.
Related Articles: Culture, Tabletop
Share
Tweet
Share
Submit