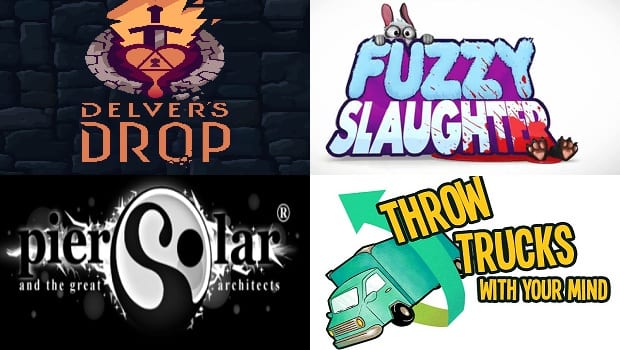 It’s been a week since the last edition of Kickin’ It, and that can only mean one thing; there’s a whole world of notable Kickstarter projects that we haven’t mentioned yet! You know the drill: Kickin’ It showcases games or gaming-related projects on Kickstarter that deserve special recognition in four distinct categories: Up and coming, a promising project on its way to funding, Underrated, a project with lots of potential but little funding, Updated, a previously funded Kickstarter with a recent progress update, and Unusual, a strange, interesting, or quirky project. Who are the lucky projects this week? Delver’s Drop, Fuzzy Slaughter, Pier Solar HD, and Throw Trucks With Your Mind.

Up and Coming – Delver’s Drop

Did you catch our recent post about clichés in RPG’s? Well, Ron isn’t the only one here at Gaming Trend who has a thing for the genre. I’m a big fan of RPG’s in all of their different permutations, from the traditional like Final Fantasy to the action-y like Torchlight, with a few MMO’s thrown in for good measure. The fact that there are so many clichés and tropes just makes it easier to notice when something really good comes along, and I think this next Kickstarter project has the potential to be just that:

Delver's Drop Official Preview Trailer
Although influenced by old-school 8- and 16-bit games, Delver’s Drop features modern HD graphics and physics-based combat. It’s currently in development for PC, Mac, Linux, iOS and Android, and iOS and the developer Pixelscopic are aiming for a closed beta in August, an open beta in September, and PC and Mac release in October.  They foresee mobile and Linux releases to come sometime in early 2014, although a stretch goal would have the Linux version complete by October as well.

Speaking of stretch goals, how funded is Delver’s Drop? With 23 days to go, the project has about 1000 backers pledging a total of $32000 out of a $75000 goal. Visiting their Kickstarter page to back the project isn’t the only way to help this game off the ground though; you can also vote for Delver’s Drop on Steam Greenlight .

Yes, you did just read the words “Fuzzy Slaughter”. And yes, the game is what it sounds like: fuzzy animals slaughtering each other. On one side you have the cute, tasty animals recently escaped from PITA! Sandwich where they were being bred for food. On the other hand you have the animals too ugly to eat, hired by PITA! to track down the escaped Fuzzies. When they meet in the middle, you get a 4-player co-op beat-em-up starring animals fighting with chainsaws, flamethrowers, and other weapons of crass destruction.

I’ll admit, the premise sounds a little ridiculous. But it also sounds ridiculously fun, which can only be helped by the talent Team Triptych has working on the game: Captain Scarlett and Her Pirate’s Booty and Sir Hammerlock’s Big Game Hunt, developers of the Borderlands 2 expansions, and Duke Nukem co-creator Alan Blum. The game will be released on PC, Mac, and Linux, and Team Triptych is hoping for $50000 to help them get there.

In what must be a first for the website, the Kickstarter page for Pier Solar HD promised not only a PC/Mac/Linux and 360 version of the game, but a release on the Dreamcast as well. Yes, that Dreamcast. The one I’m just barely old enough to remember playing on. Pier Solar is a 16-bit RPG, originally developed and released for the Sega Genesis. The developers, Watermelon Co., bill it as the biggest 16-bit RPG which makes sense:

In addition to being on a number of consoles (stretch goals added Wii U, Android, and Ouya versions to the pipeline, and a Game Informer article mentioned PS3 as well), the game will also be available in a number of languages: English, Spanish, Portuguese, French, and German (plus Japanese, via a stretch goal). With so much content, it’s no wonder the game smashed it’s initial funding goals by the December end date. Since then, however, the Pier Solar HD Kickstarter page has fallen strangely silent. Hopefully that just means Watermelon Co. is hard at work.

Unusual – Throw Trucks With Your Mind

Again, I must clarify that you did just read the words “Throw Trucks With Your Mind”, and once again it is exactly what it sounds like: a multiplayer, first person game for PC and Mac that uses a MindWave headset from NeuroSky to let you literally throw trucks with your mind. The headset is supposed to analyze your brainwaves, with the results played out in-game.

The game works by doing a bunch of crazy math on your brainwaves to determine how calm and focused you are. These two conditions act as the scalars on your psychic powers.  Want to throw a truck into that pompous jerk strafing around in front of you? Just focus on it. The more focused you are, the harder you fling the truck and the more smushy he ends up.

I have no idea how accurately a game can actually measure your level of focus, but the idea sounds incredibly cool. Of course, you can’t control everything with your mind. You’ll need your mouse and keyboard to look and move around, while your brainwaves determine how strong your attacks are. Still, this quirky little project has my interest. If it has yours too, head to the Throw Trucks With Your Mind Kickstarter page to  join the backers who have already contributed $12000 towards the $40000 goal.

They say good things come in three’s, and this marks the third week of Kickin’ It. Was it good for you?