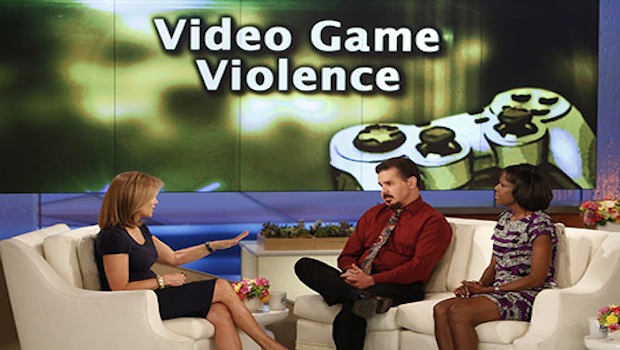 Renowned narcissist Katie Couric posted a tweet today in hopes of engaging gamers who were “upset” about an hour-long discussion of violent video games during her daytime talk show, Katie, yesterday. In the tweet, she challenged readers to post replies that elaborated on the positive qualities of violent games. The predictable backlash that ensued included a lot of salient points (guess from which side) that poked countless holes in the famed chatterbox’s position, and also shed some light on the stance of others who agreed with her.

Here’s what she wrote in all its cheerful, cutesy, “who-me?” glory:

You can probably imagine the horde of bored soccer moms who rushed to back her up, posting reply-tweets about how America has lost its heart, and little Jimmy has been playing way too much Halo 4 , he’s been punching his stuffed animals, and won’t somebody please think of the children?! However, the response from actual gamers and parents of gamers proved far more insightful and coherent. Here are some of my favorites:

@katiecouric Violence in football, boxing, hunting, film, news, tv… Why separate vid games from all of those other U.S. cultures? #context

@katiecouric the worlds I inhabit in games/books/movies/tv are my passion. They give me balance and enhance enjoyment of my daily life.

@katiecouric To the people who say “video games perpetuate violence”; please tell me what video games were being played 500 years ago.

@katiecouric @kotaku I play violent games and, despite your absurd, irresponsible sensationalism, I have no urge to hurt you. So, there.

[email protected]katiecouric I’d take your piece under deeper consideration if it wasn’t done in May sweeps and didn’t prey on people’s fears.

[email protected]katiecouric They’re not upset at the conversation. They’re upset that you didn’t even bother to have a conversation.

Now, just to show how the other half lives, I wanted to add a few hall-of-famers who felt like backing her up:

@katiecouric Sorry there is none!!!Violence of any type is never good!!!!!

@katiecouric Positive side? Sorry, can’t include positive & violent in the same sentence. To Answer the ?… None.Cant wait to read answers

Oh wait, actually those were the only two I could find readily available on Twitter as of this writing. Almost every response that I saw decried Couric’s original tweet. I think she may have chosen the wrong platform if she was hoping for a slightly different response. I’m sure the people who actually tune in to the show are already on her side for the most part, but the Twitter-verse really didn’t have many kind words for Miss Katie.

I don’t want to get up on a soapbox here and thereby sink to the level that Couric has by engaging in such sensationalist tactics, but hey, she’ll do anything to keep ratings up, despite her tendency to engage with guests who spout absolute drivel, such as moronic football star Manti Te’o. Naturally, the conversation in question revolved around gamers who have engaged in catastrophically violent behavior – with the editors of the show rolling out just about every “scary montage” trick in the book – and did manage to paint a rather frightening picture if you’re prone to falling for such an agenda.

You should check out the article on Kotaku for some great clips from the show, along with a much more in-depth breakdown of the responses that this now-viral tweet elicited – some of the people on her side wrote some real gems, and I highly recommend giving them a read-through. In the meantime, let us know your thoughts in the comments section, and we promise there will be no judgment if you find yourself agreeing with the ratings wench er.. I mean glamorous host of a thrilling, quality program.

Sam is an aspiring novelist who spends his days handling tech support for a Manhattan-based website called streeteasy.com. Despite living in Brooklyn and being a white twenty-something who likes to think he's got some sort of creative talent, he hopes to avoid being pigeon-holed, because we are all beautiful snowflakes. He has come to Gaming Trend with the intent of improving his writing by way of a deep and abiding love for PC gaming, but hopes to let consoles into his life just as soon as his pockets become a bit deeper. He and his wife can often be found wandering around Central Park, where they enjoy making fun of people who resemble their own dogs.
Related Articles: Culture
Share
Tweet
Share
Submit