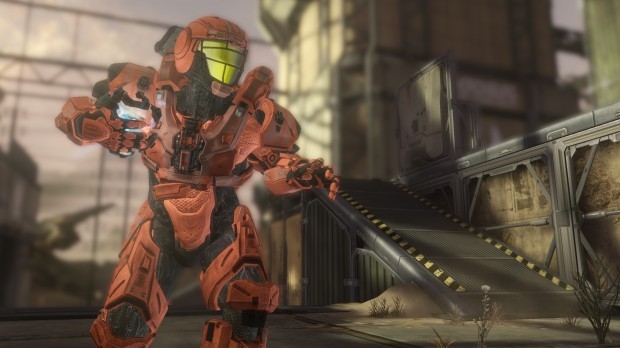 Halo 4 may no longer be the center of attention during this busy gaming season that will give rise to a new generation of consoles, but for fans like myself who can’t help but dust off Halo every once in awhile, the Champions Bundle Pack does not go unnoticed. But what does the pack include, and is it enough to get players back online? After a few hours of enjoying the DLC myself, the answer is a mixed bag.

Firstly, what’s in the DLC? Well, the Champions Bundle is actually comprised of three downloadable packs of varying degrees of usefulness. Chiefly, the bundle includes the Bullseye Pack, which offers two new maps and a new game type. Less important are the Steel Skin and Infinity Armor DLCs, which are included, but only contain cosmetic content.

The two new maps offered in the Bullseye Pack are some of the best Halo 4 has seen to date, the first being a remake of Halo 3’s “The Pit,” this time called “Pitfall.” Pitfall has all of the variety and balance as the beloved Pit, and recreates the original down to the last geographic detail. Though the arena has lost the glimmer of a newly-built facility and now takes on a rustic, abandoned look and feel, in what I assume is a stroke of meta-hilariousness on 343’s part. The new map has lost none of its charm and will make any fan of Halo 3 infinitely happy to see The Pit restored in all of its glory.

The second map offered is called “Vertigo,”and offers an entirely new experience, as opposed to Pitfall’s nostalgia. The map is medium-sized and features two prominent towers in the center of a mountainous area, and the whole experience lends itself to players who enjoy experimenting with heights. In my time on this map I went from sniping those below me, to surprising those above me, to taking cover in dark tunnels all within a matter of seconds. The towers themselves also have a unique environmental hazard, as a panel on each of the towers electrocutes the floor when it is shot, and the panels reactivate after 30 seconds are so. While camping on the towers offers a high-ground advantage, players can expect to get a shock from envious players below if they aren’t attentive. The beautiful environment, plethora of strategic options, and uniqueness of the map quickly made it one of my favorite maps, and a welcome addition to the game’s growing library.

The final piece of the Bullseye pack is a new game type called Ricochet, which is more-or-less a Spartan version of American football. In a manner that is reminiscent of Griffball, teams are tasked with reaching a goal zone while carrying a ball. However, in this gametype, hammers and swords are replaced with the full arsenal of weapons that Halo has to offer. Players are also given the option of tossing the ball into the goal, rather than carrying it all the way, although they are awarded fewer points for doing so. I was a huge fan of Grifball, so Ricochet was right up my alley, especially since playing Infinity Slayer 100 times can become exhausting, and Ricochet offers such a different experience.

The Steel Skin pack includes some uninteresting re-skinning of guns. Players can choose from Iron and copper-colored skins, or they can make a wise decision and not use them–ever. The Inifinity Armor pack offers a slightly better deal by delivering the original Mark V Spartan armor and the ODST armor, neither of which have lost their luster, and a new torso piece called the “Prefect,” which isn’t bad either.

The pack also offers a few extrra bonuses that aren’t in any other separate packs, which include the resistor upgrade, an ability that helps your shield regenerate more quickly, and some new Halo-themed stuff for your avatar. These added benefits add some additional value to the Champions Bundle, but by no means are game changers.

So, is the pack worth the $10 price tag? Maybe. Hardcore fans will want all the bells and whistles that the pack has to offer, but if you don’t care about cosmetic stuff, then I would just suggest you buy the Bullseye pack separately. The new maps and new gametype do the brunt of the work for this DLC, and you won’t miss much by skipping on the other two packs offered. That said, it’s only $10, people, and if you’re still playiing Halo 4 at this point, it’s probably worth it for you to expand the experience with the Champions Bundle pack.

You know that jerk online that relentlessly trash talks you after every kill? That guy was probably Travis "Tie Guy" Northup. Competitive, snarky, and constantly wearing a tie, Travis has been writing his opinions about electronic media since he was a teenager, and is pretty much the only person to hold his opinions in high regard.
Related Articles: Halo 4
Share
Tweet
Share
Submit