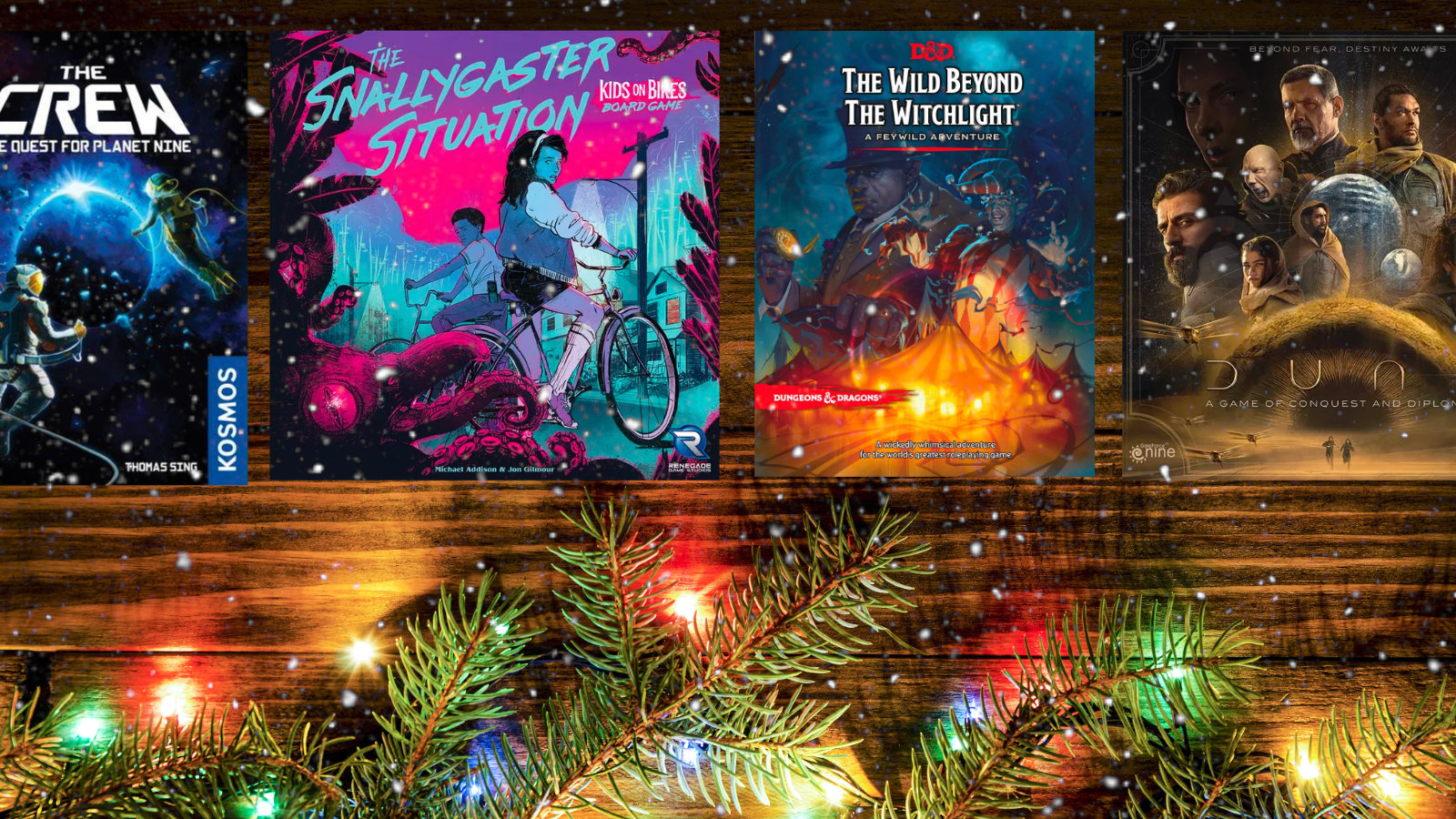 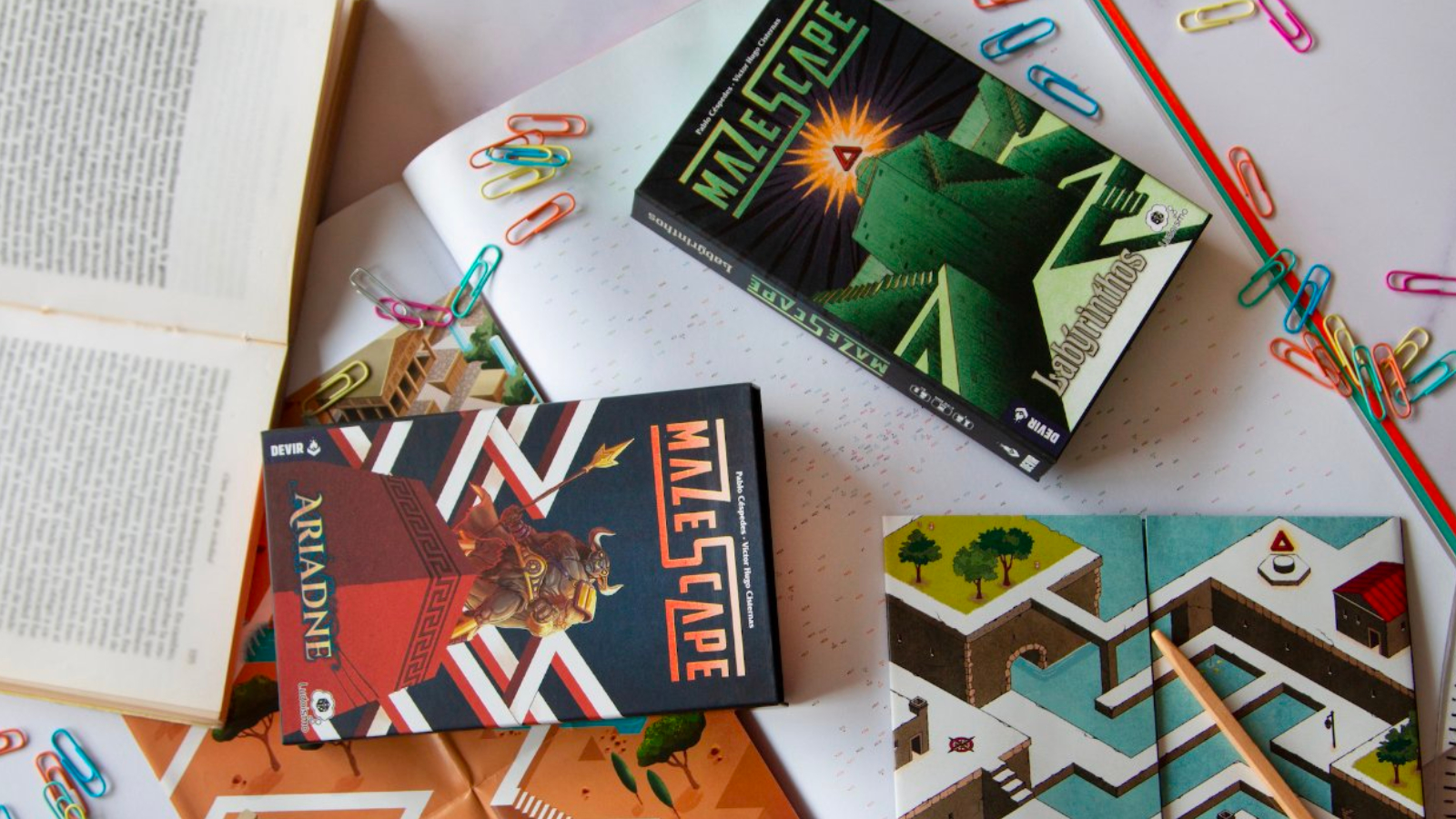 Did you love Monument Valley but drain your phone battery playing it? Both MazeScape offerings – Labrynthos and Ariadne- evoke that classic, but use a large sheet of paper folded old-school map style and a wooden stylus rather than a mobile device and a finger. The lovely magnetic clasp box is a perfect size for stockings or small gifts for that special someone who craves solo experiences. 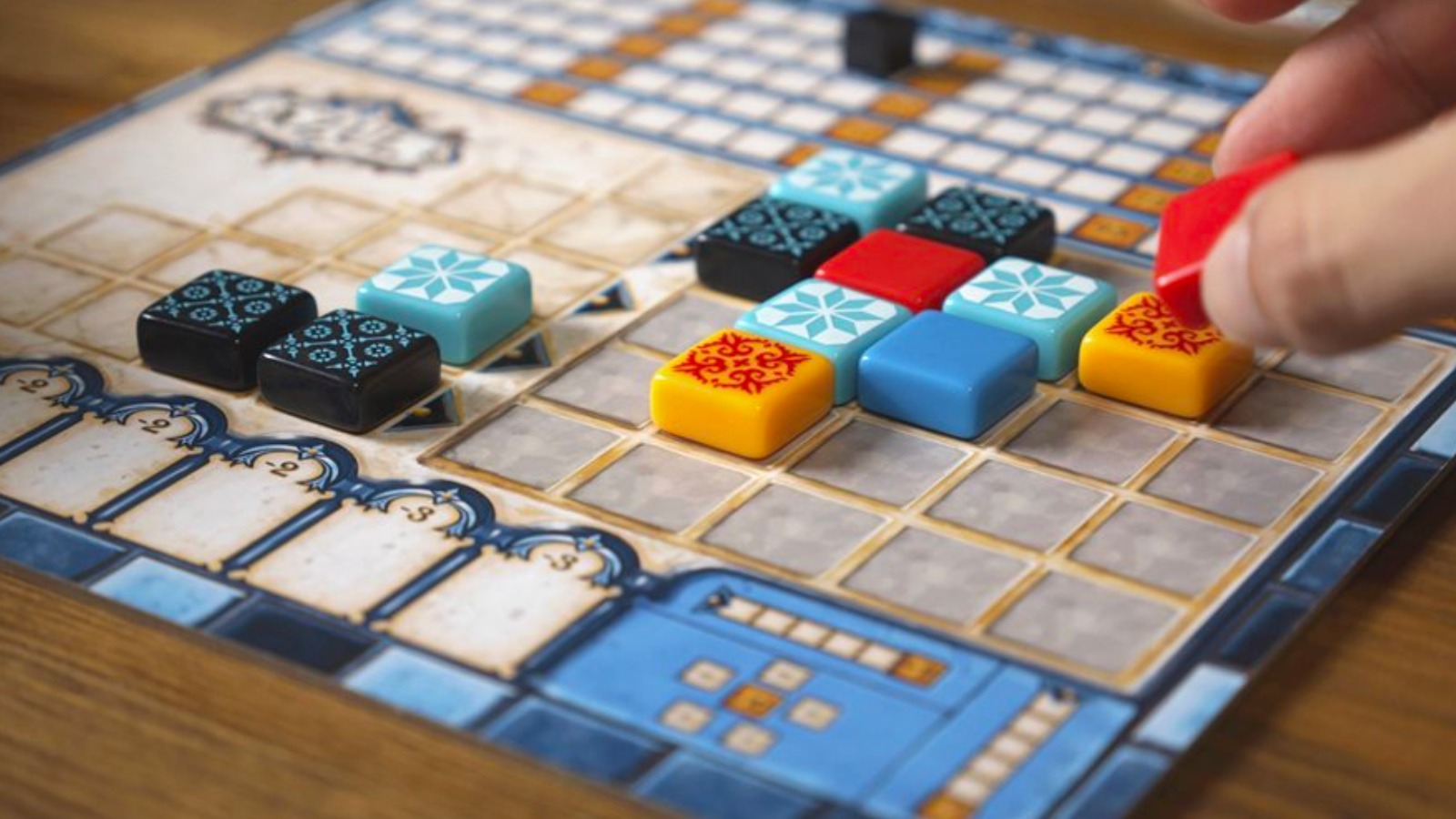 In a day and age where peripherals and aesthetics are a big draw for people who play board games, Azul is a standout. Starburst-like pieces that while playing are drafted off platforms, are used to make and complete a mosaic type of puzzle on each player’s board. The pieces you move to your board provide a satisfying tactile and visual experience that any board gamer can enjoy. With a reasonable price point and a simple set of rules, it is a must have for any collector from kids to adults. Azul is a gift that keeps on giving. 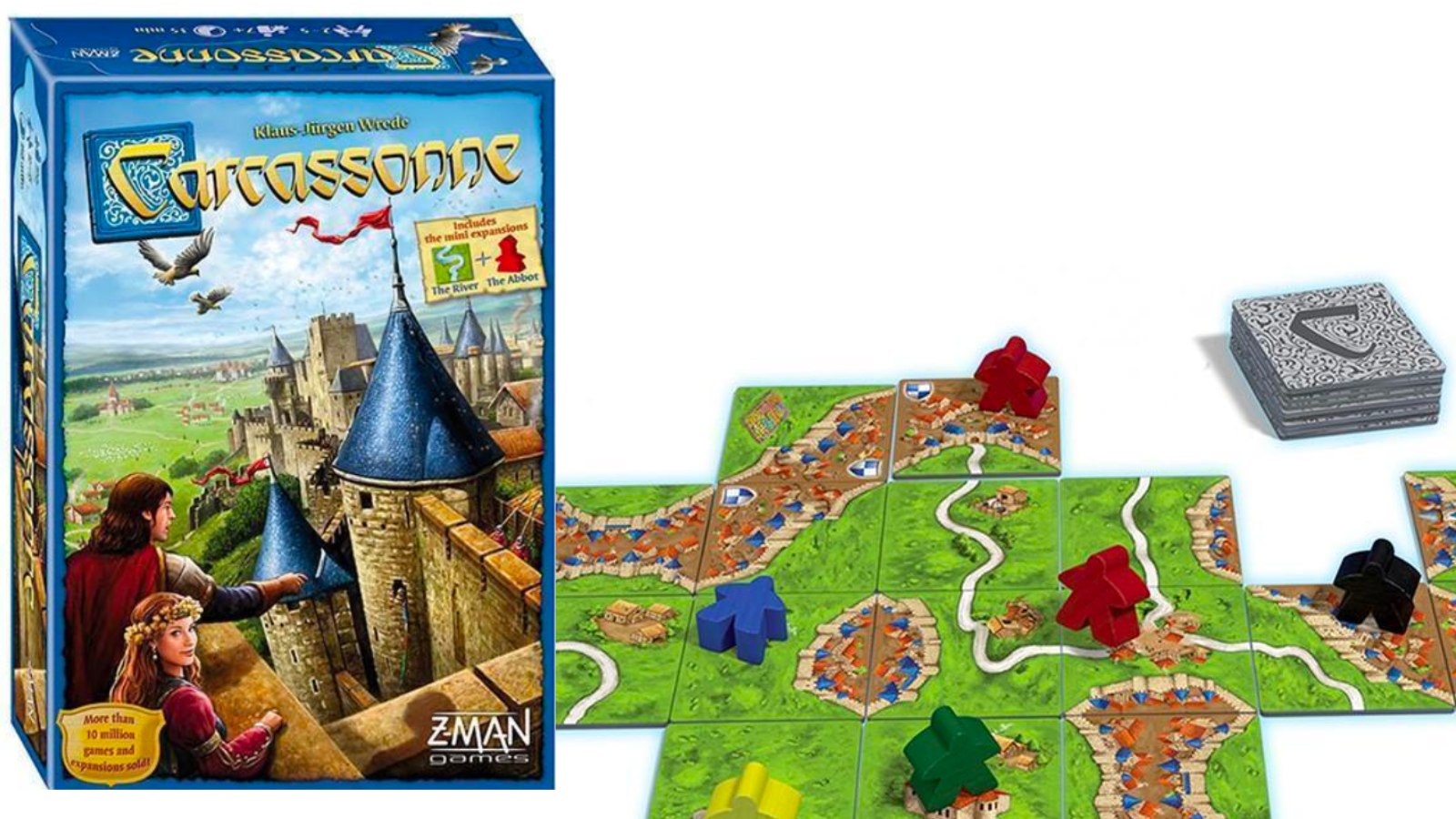 In this lightweight tile laying game, Carcassonne provides a great gateway experience that features player interaction, a satisfying feel when completing cities, roads, or even monasteries to score points. With a table presence that makes each game different, Carcassonne provides enough variation to enjoy repeatedly. Ultimately the plethora of expansions or stand alone versions that are available make Carcassonne a game that you can endlessly enjoy with friends, and family. 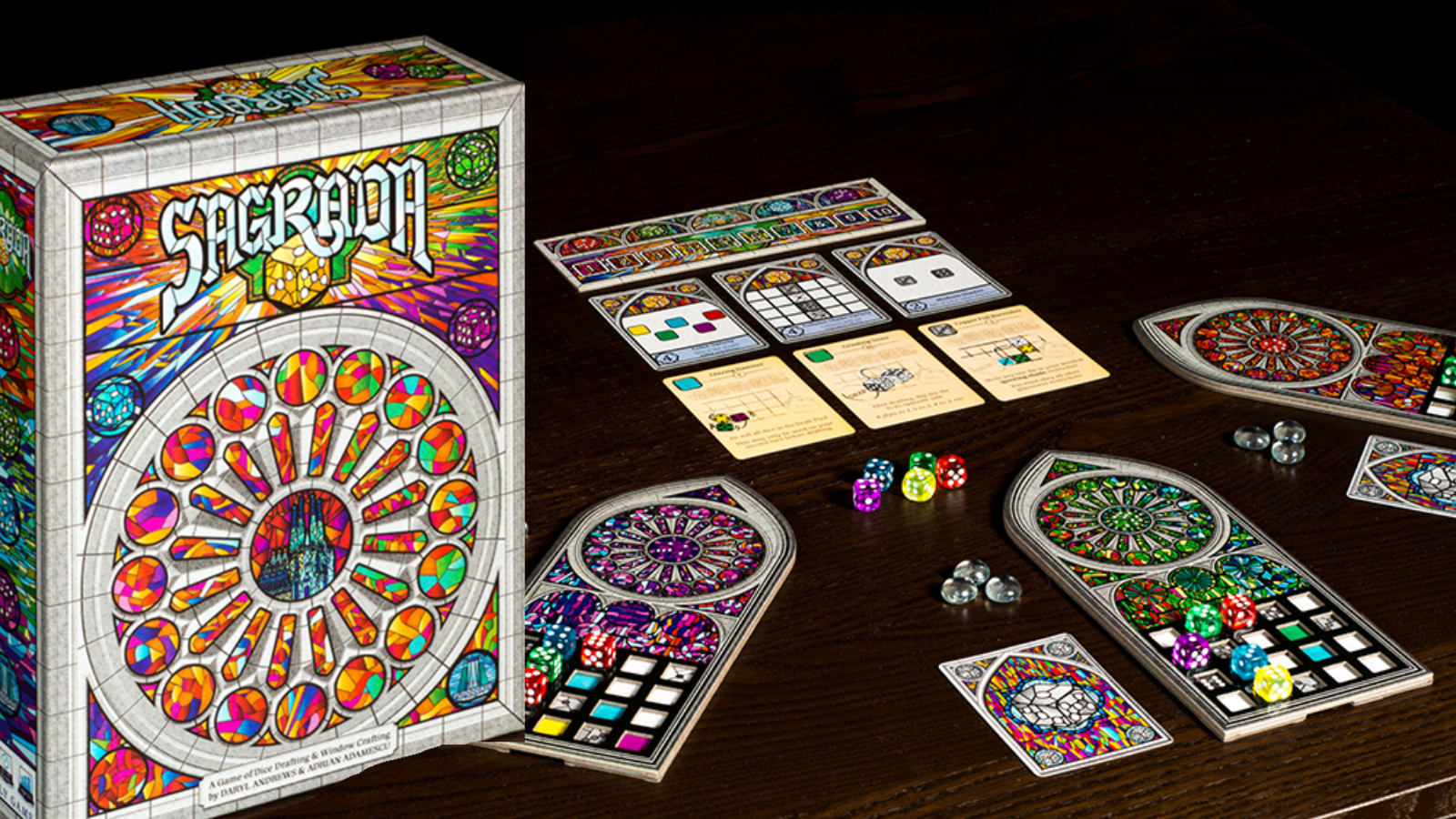 A beautiful, simplistic, and easier to play game Sagrada is a game that everyone will want to experience. From the colorful dice to combing the dice to make a beautiful stained glass window, all of these make Sagrada an instant classic. The depth that Sagrada provides is enough to keep even the most hardcore gamer interested. It also provides a lot of simplicity to welcome new gamers and introduce them to the world of board games. With multiple expansions Sagrada is a game that anyone will be happy to own and be excited about playing. 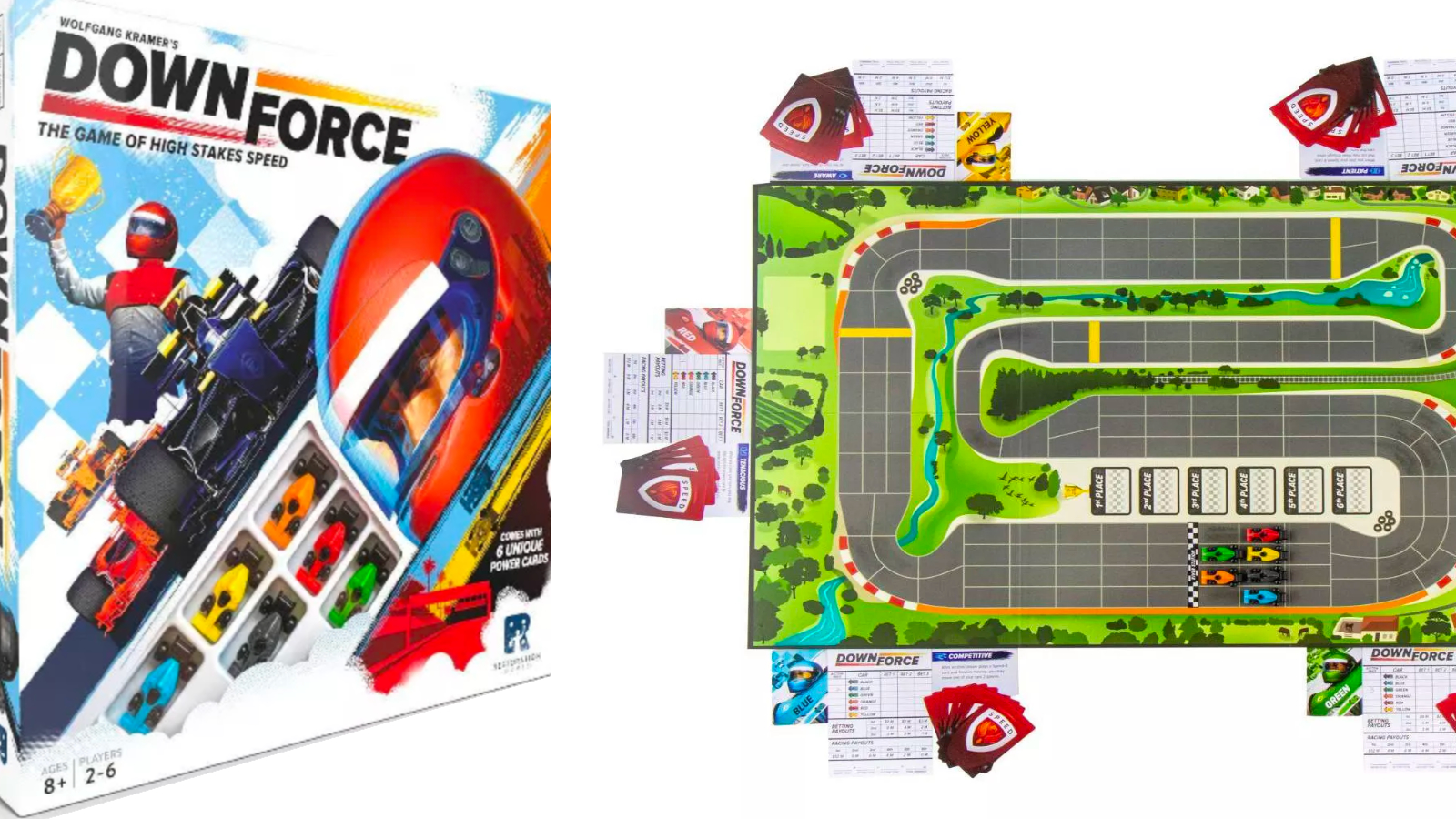 Restoration Games released this reimplementation of Wolfgang Kramer’s classic Top Race system of racing and betting a few years ago, and recently brought a revised edition to Target shelves. Easy to learn and more fun than it has a right to be, Downforce has players using cards to move all of the cars along the racetrack (not just the ones they won during the auction) as they place multiple bets on who they think the winner is during the course of the race. Thanks to Target’s own supply chain, this is one game that should be easy to find before Christmas. 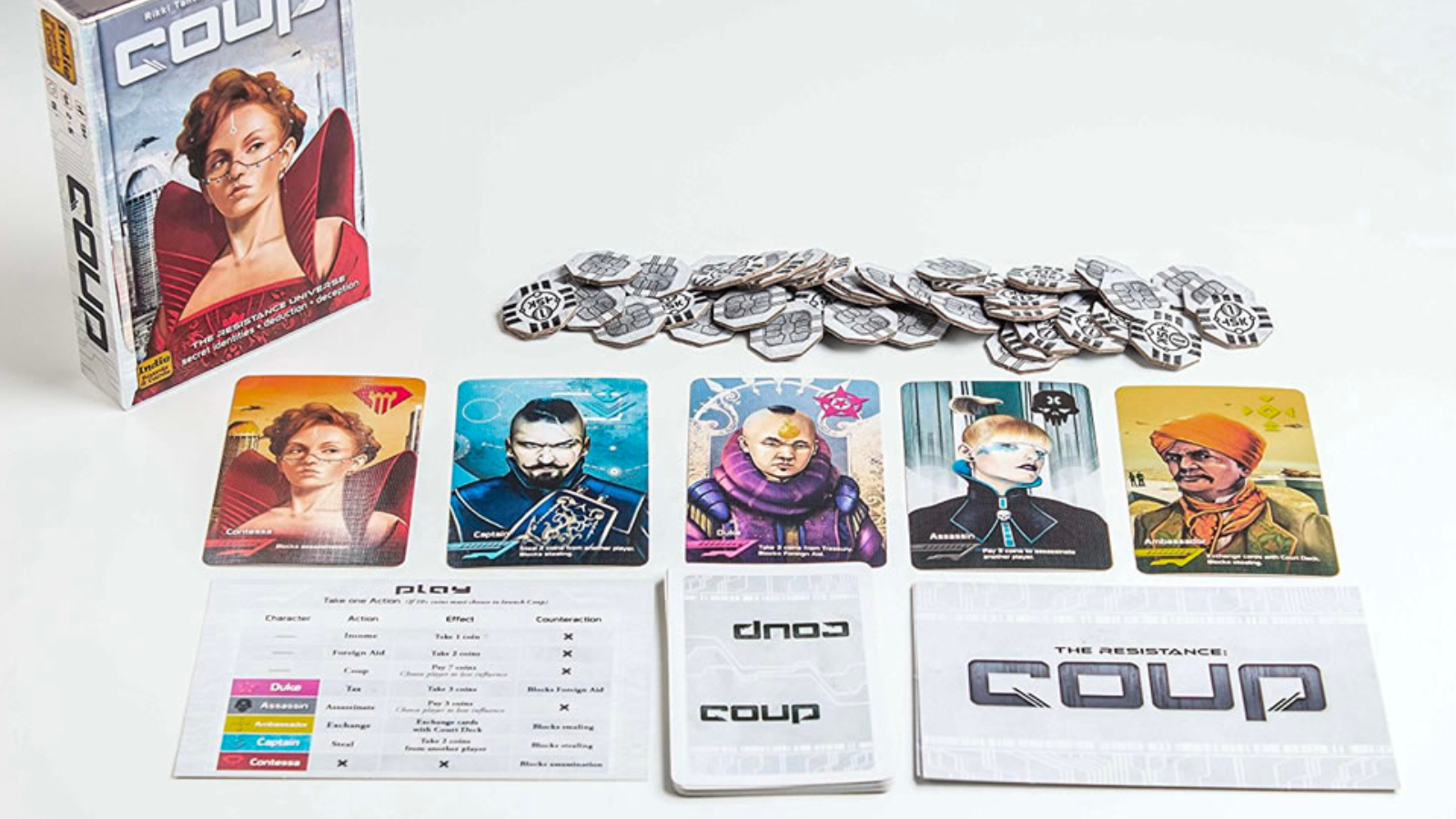 Don’t let the tiny box and cheap price fool you, Coup is an instant classic. Simple rules that fit on the player reference cards ensure that even the uninitiated immediately understand what’s going on, and quick 10-15 minute games keep it snappy. Whenever you wind up playing, there’s always the desire to have just one more game, no matter the player count. 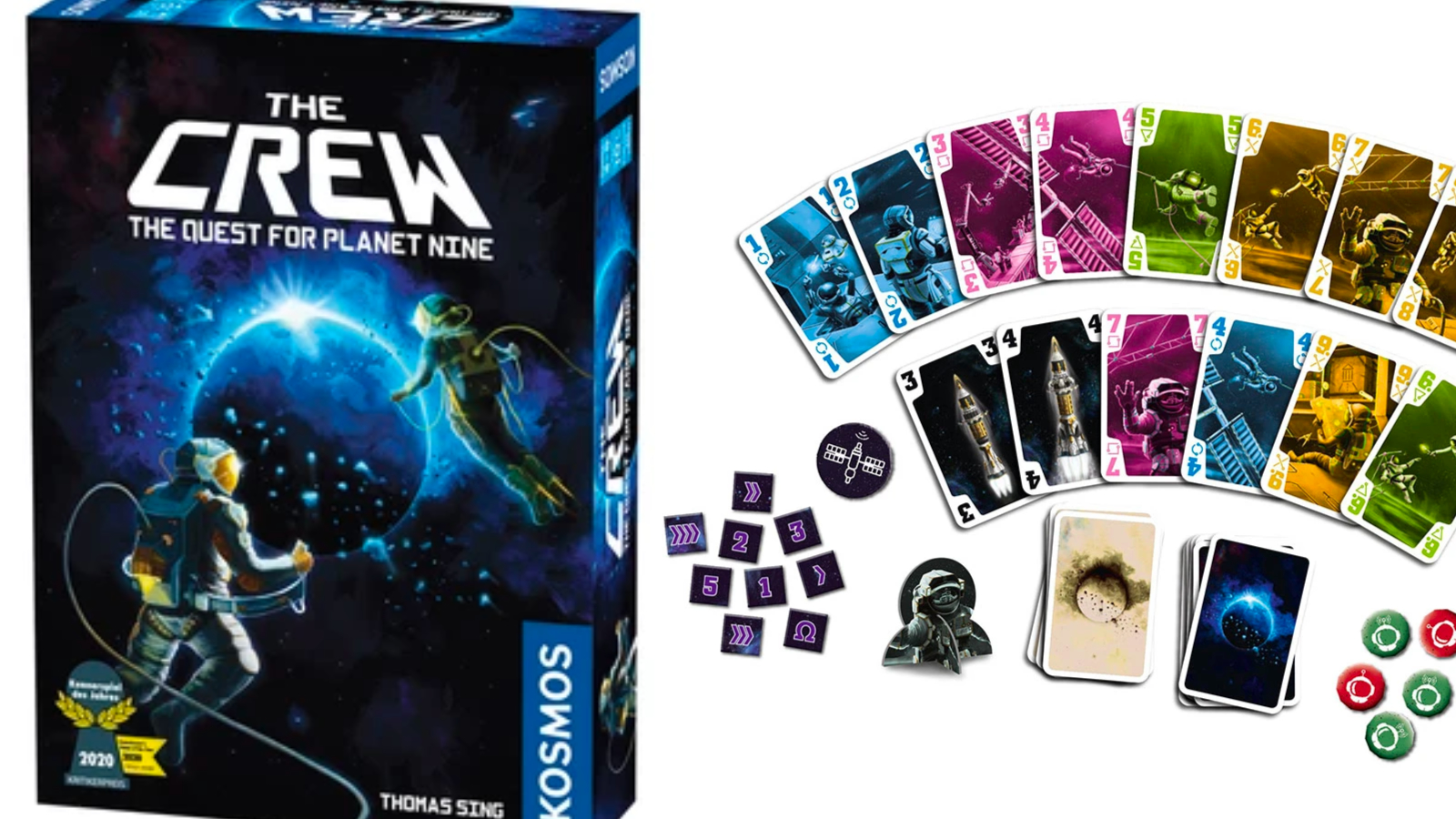 The Crew: The Quest for Planet Nine & The Crew: Mission Deep Sea

Card games where players can’t communicate or have limited communication have been all the rage the last couple years, and the trick taking game The Crew: The Quest for Planet Nine and it’s sequel are two of the best games to emerge from this trend. Included in each box are a series of “missions” (challenges) that ramp up the difficulty of the game. These are great games that are easy to teach, and quick and fun to play.

Get The Crew: The Quest for Planet Nine now! 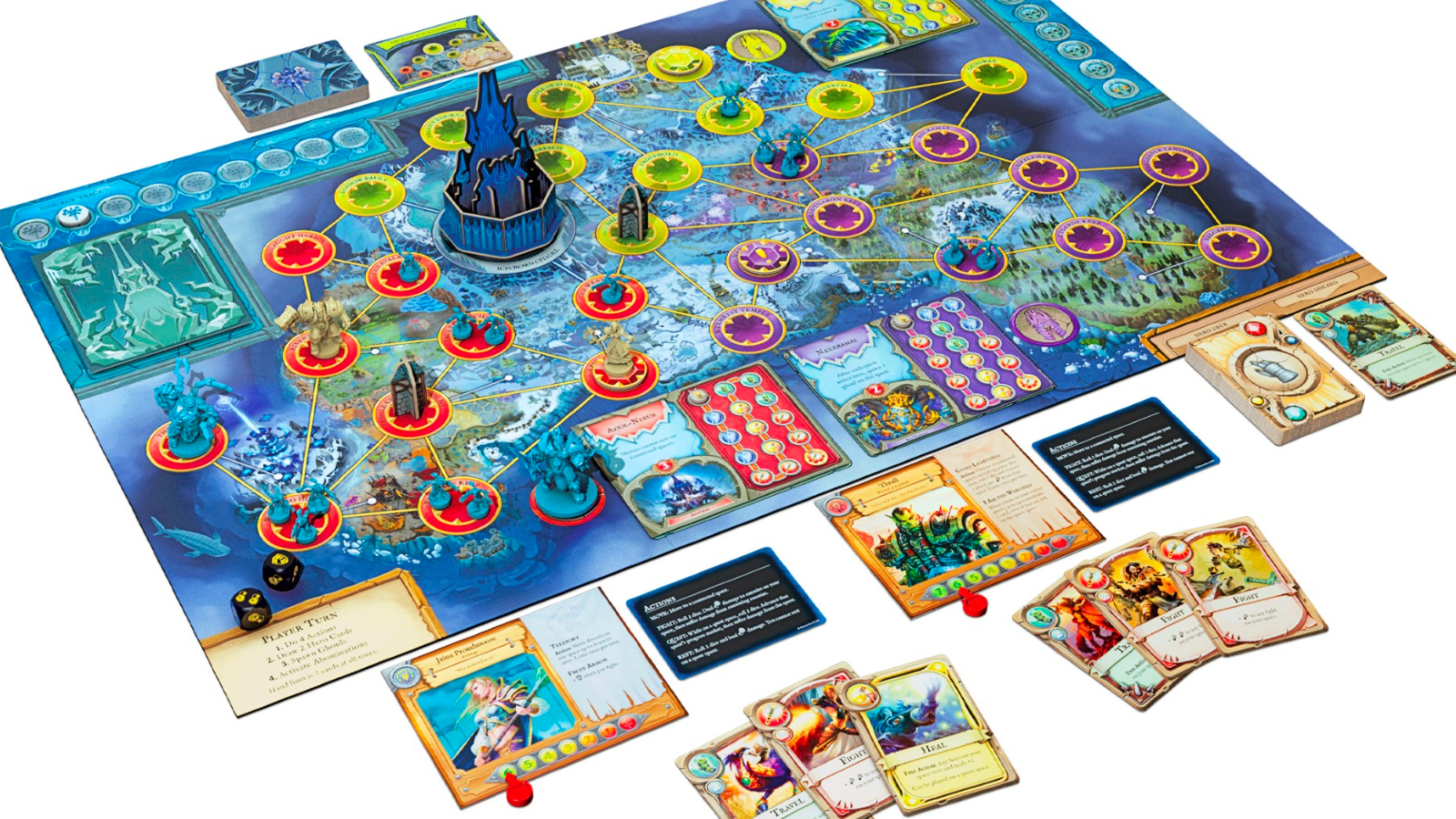 Pandemic: Wrath of the Lich King

The tabletop cooperative classic comes to the land of Azeroth in Pandemic: Wrath of the Lich King. Players will team up as their favorite Warcraft characters and travel across Azeroth to defeat the Lich King and his minions. You will use a combination of cards and unique character abilities to fight the Lich King’s ever present army of ghouls and foil his evil schemes. Frostmourne hungers! (This is a Target exclusive currently) 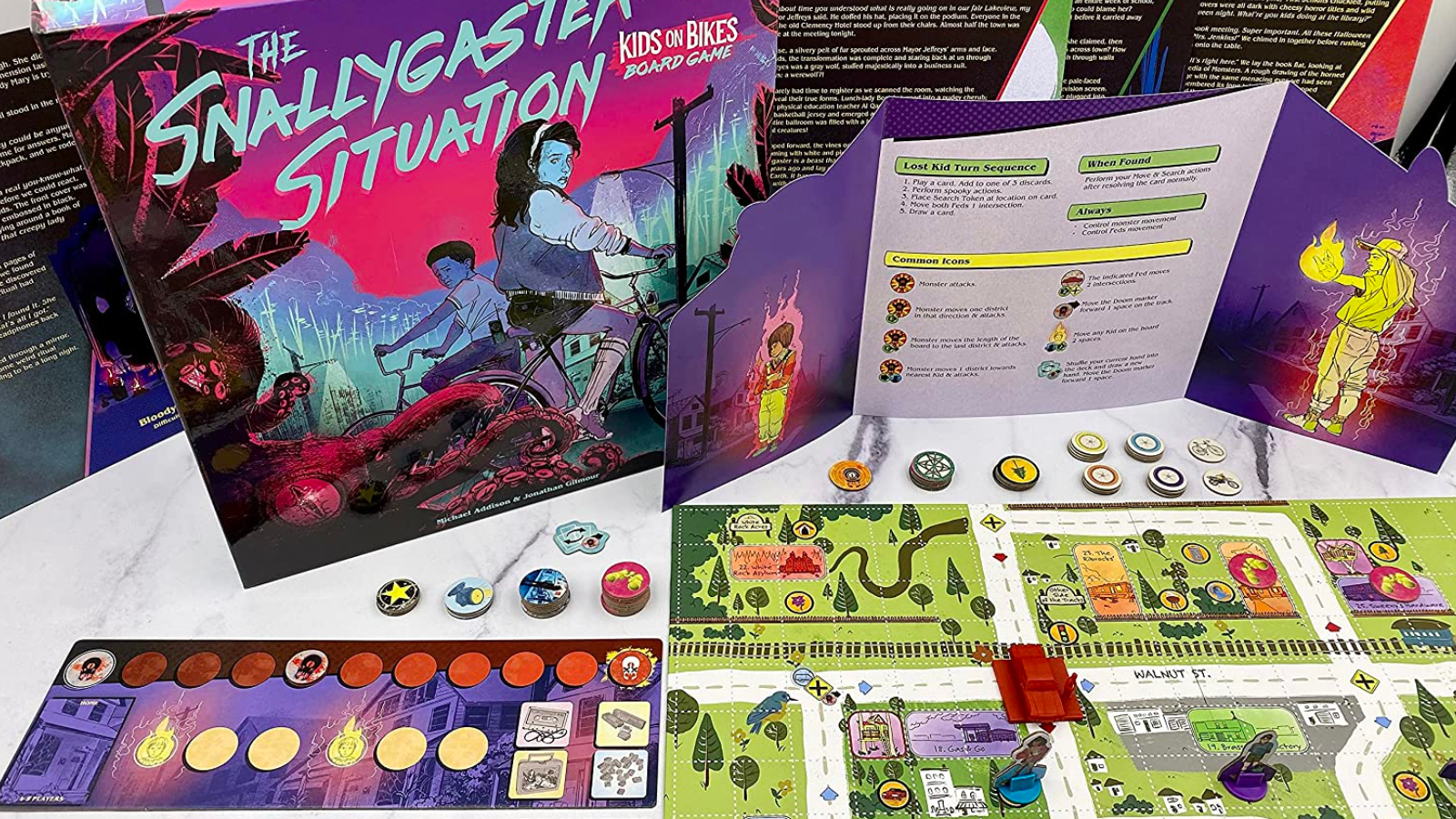 This is what happens when Stranger Things meets tabletop gaming. A robust game featuring tons of items, cards, stories, and areas to explore – not to mention four separate monster campaigns each with their own goals, rules, back stories, and difficulty levels, ensures that The Snallygaster Situation provides a complete package. The creators often go above and beyond to provide not only a fun experience, but background stories to nearly everything being done in order to flesh out the world they have built. Top that off with beautiful artwork and you’ve got a winning combination and the perfect game for a night in. 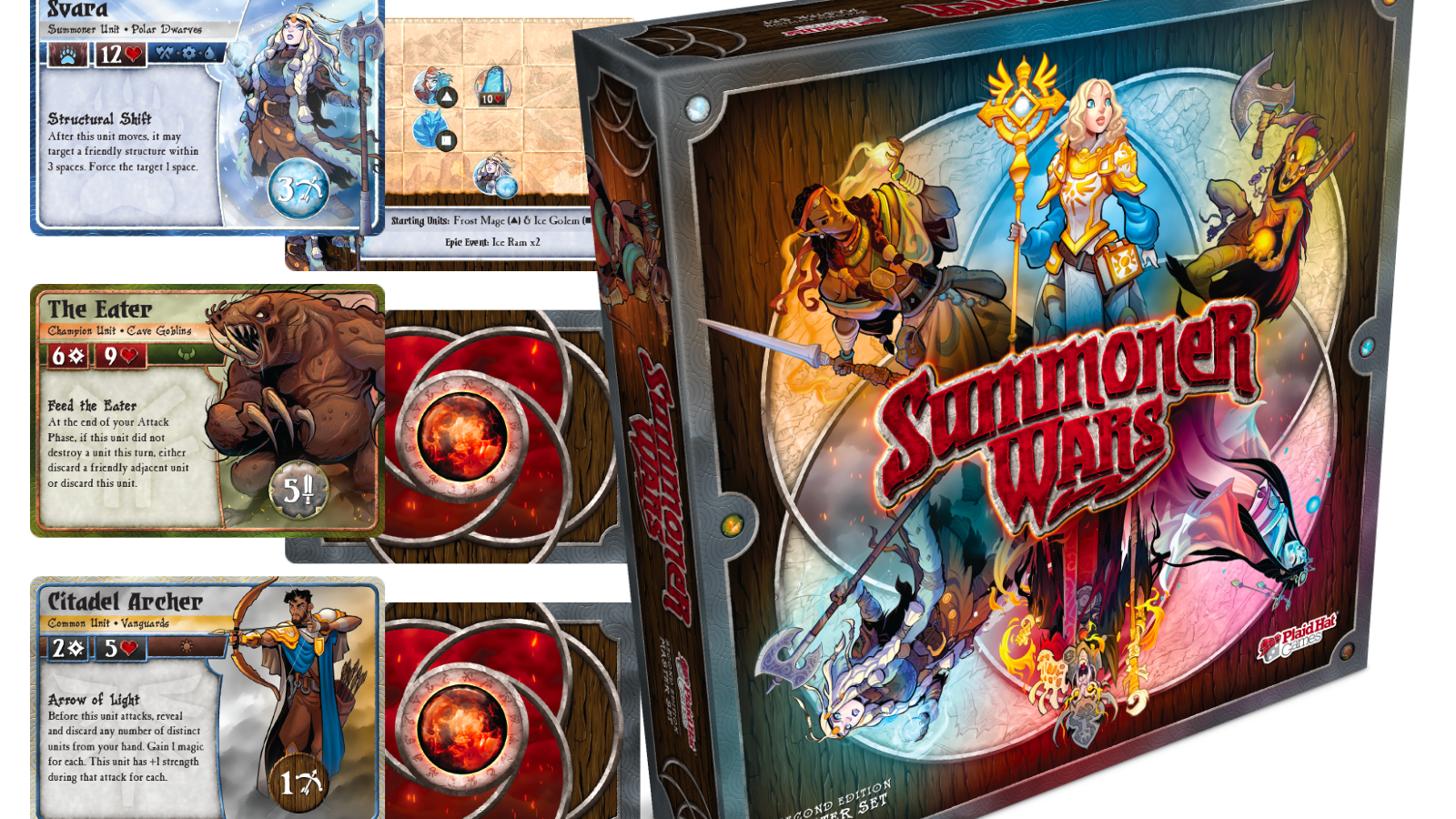 The endlessly expandable battle of summoners returned to the tabletop in 2021 with a second edition. Two players battle it out to be the last summoner standing in a tactical slugfest featuring unique asymmetrical factions. Think Magic but faster, on a grid board, and not pay-to-win. This new edition features all new beautiful art and new, as well as old favorite, factions from the first edition. The core box is available now with a regular schedule of expansions planned to grow your collection if you love the game (you will). 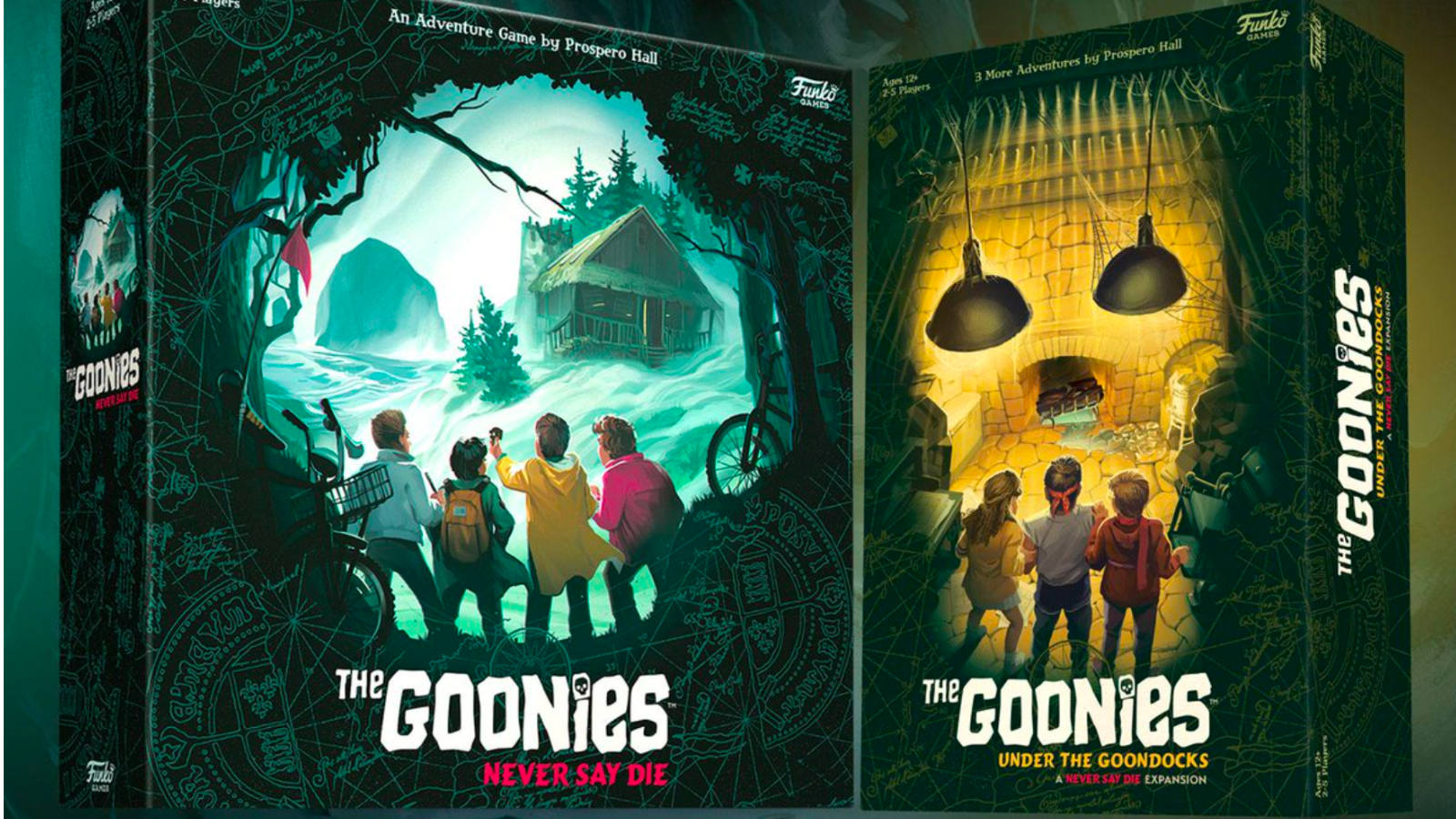 Relive the classic 80’s movie in this (Target exclusive) dungeon crawler game from Funko Games and Prospero Hall. It’s nine scenarios hew very close to the film narrative, carefully overseen by one player as the Goondocks Master (GM). Goonies is a great way to introduce someone to the genre, and it is steeped in a theme may interest them more than the standard fantasy fare will. For three more adventures that include the teens of the film, be sure to get the Under the Goondocks expansion.

Buy The Goonies: Under the Goondocks now! 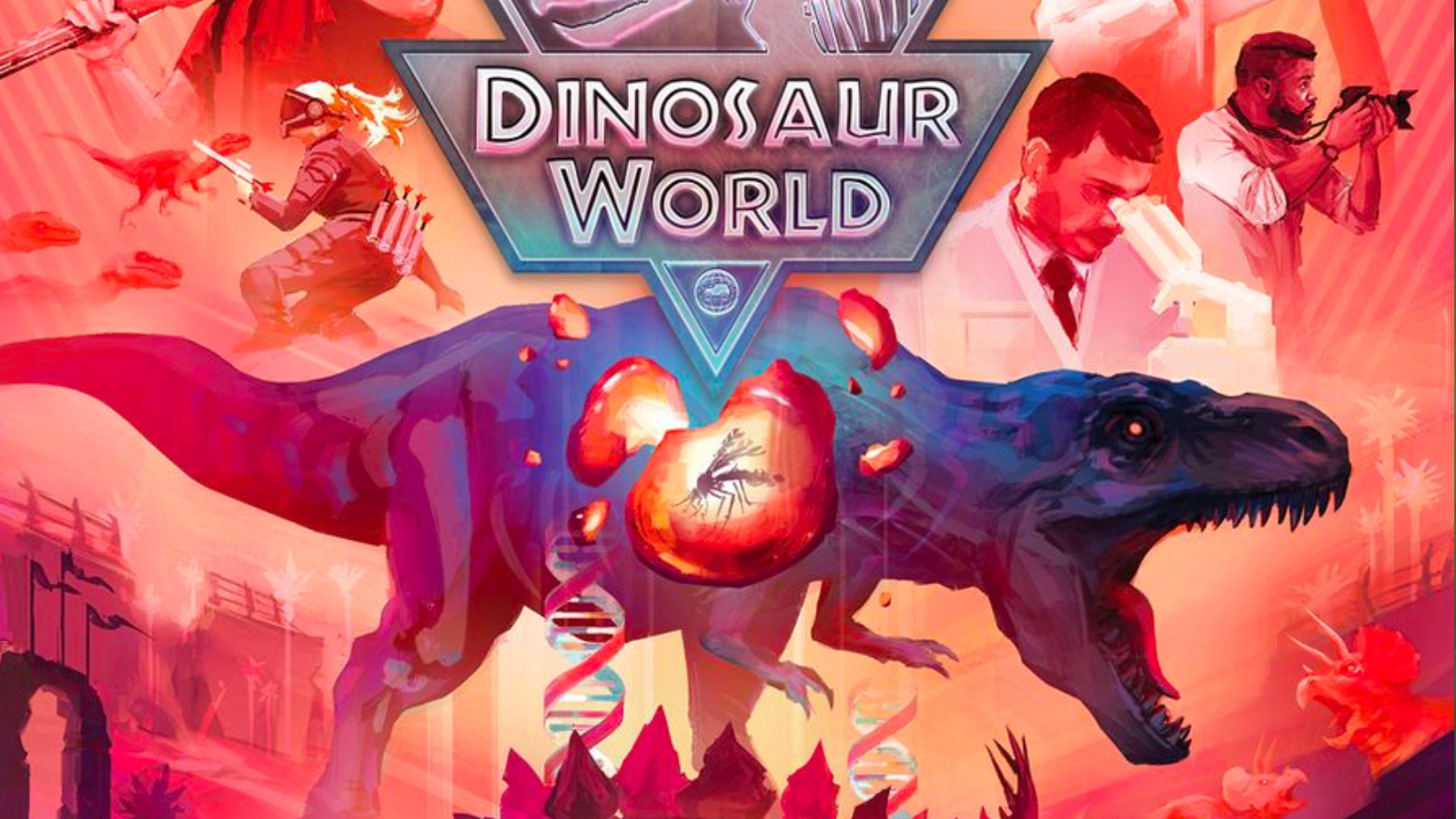 Have you ever wanted to star in your own version of Jurassic Park? If so, look no further! In a beautifully crafted and finely tuned worker placement game, Dinosaur World affords an experience that transports you right into the world of an owner of a dinosaur theme park. Give tours, build your park, breed and add dinosaurs to your park, these are but a few things you can do within the game that thematically immerse the player in a world of dinosaurs! 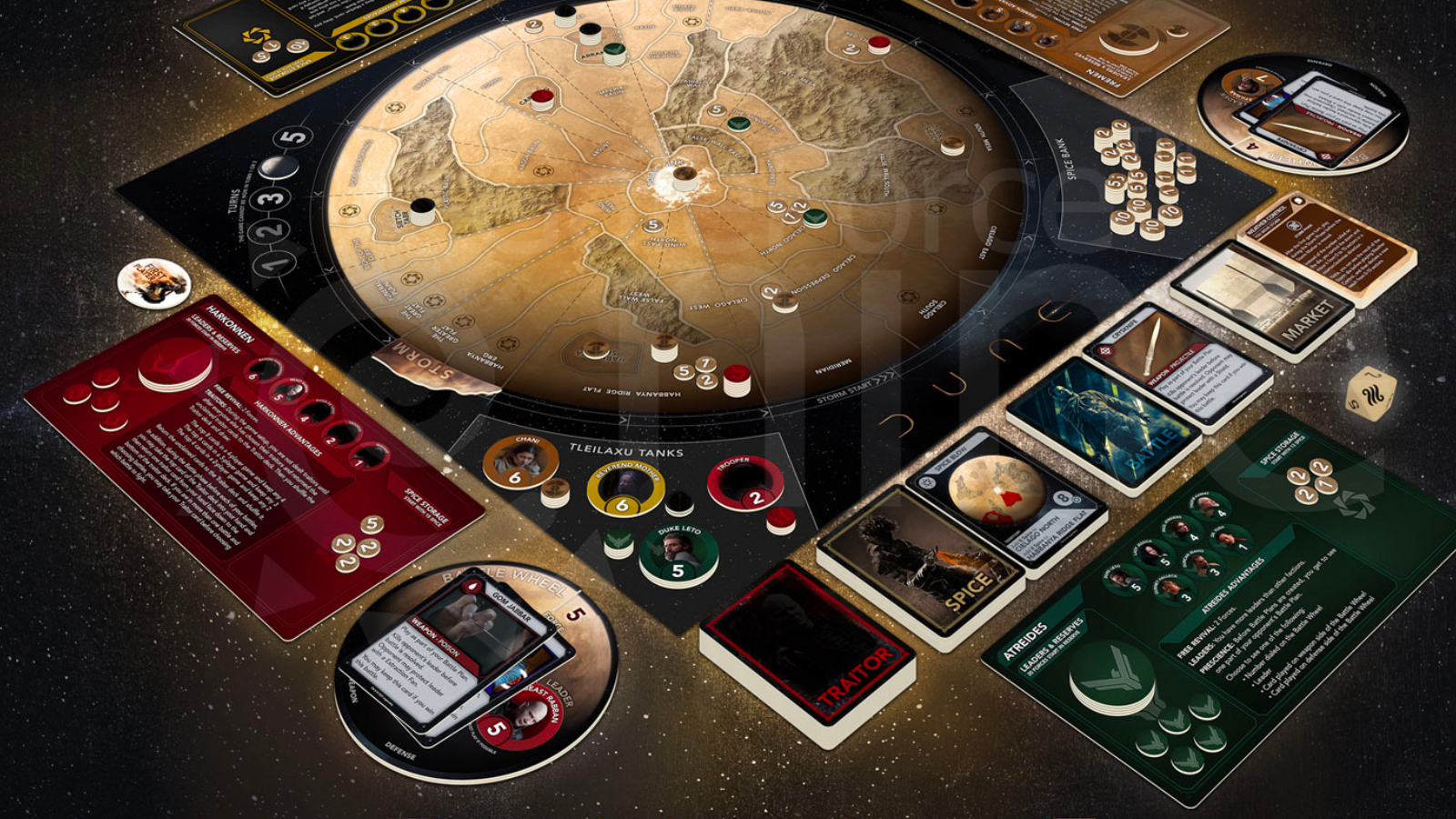 Did you walk away from the new Dune movie itching to play the Dune board game, only to be put off by its extensive rules and wildly variable playtime? Good news, the original designers came back and created a streamlined four player game that plays in about an hour. 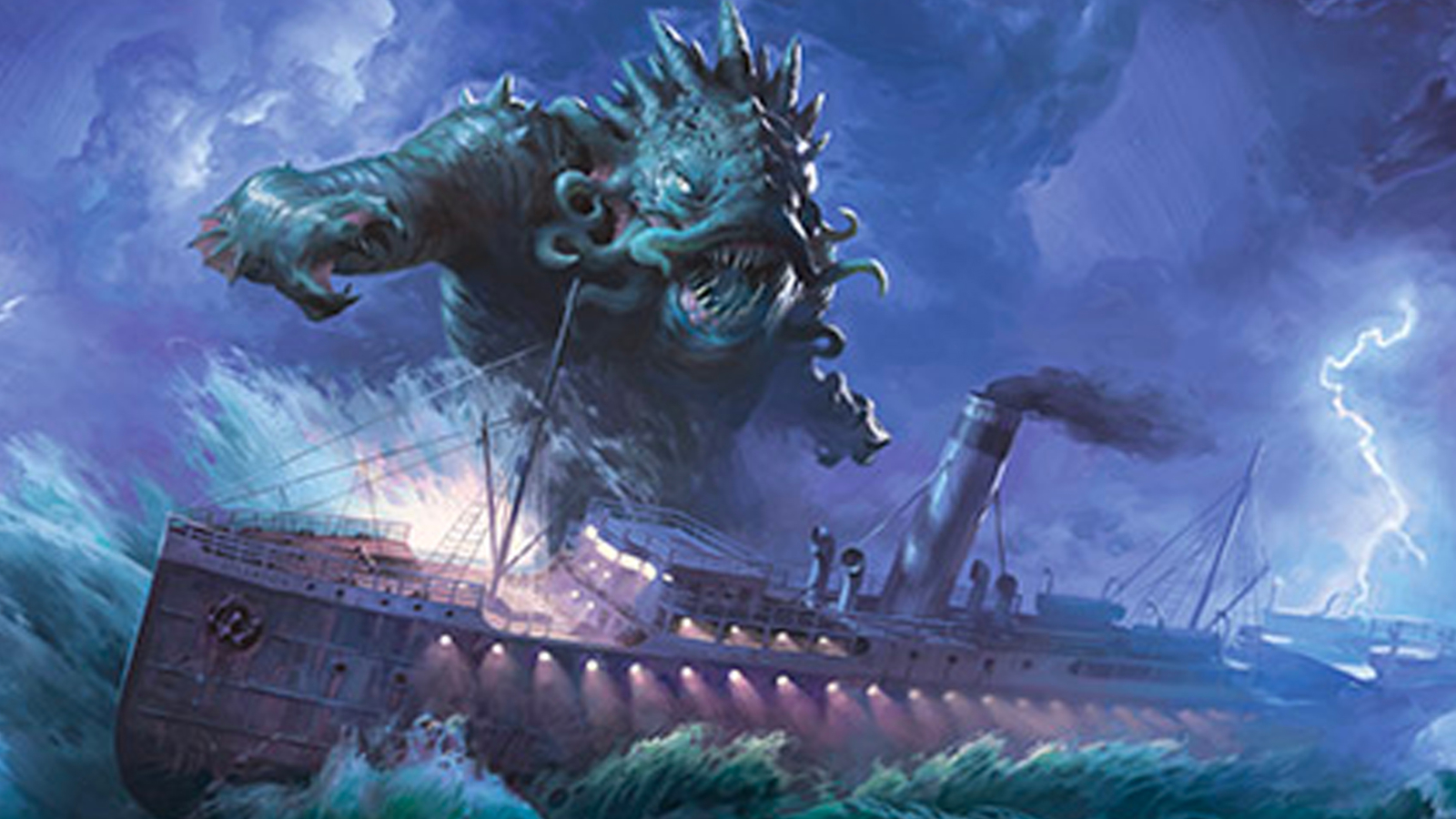 In the reskinned second edition of the Battlestar Galactica board game, the crew and passengers of a transatlantic ocean liner have to fend off the assault of lovecraftian horrors as they plod along to Boston. Trust is as scarce of a commodity as food or fuel, since at least one of your teammates are actually traitors, trying their best to sabotage your efforts without being discovered. 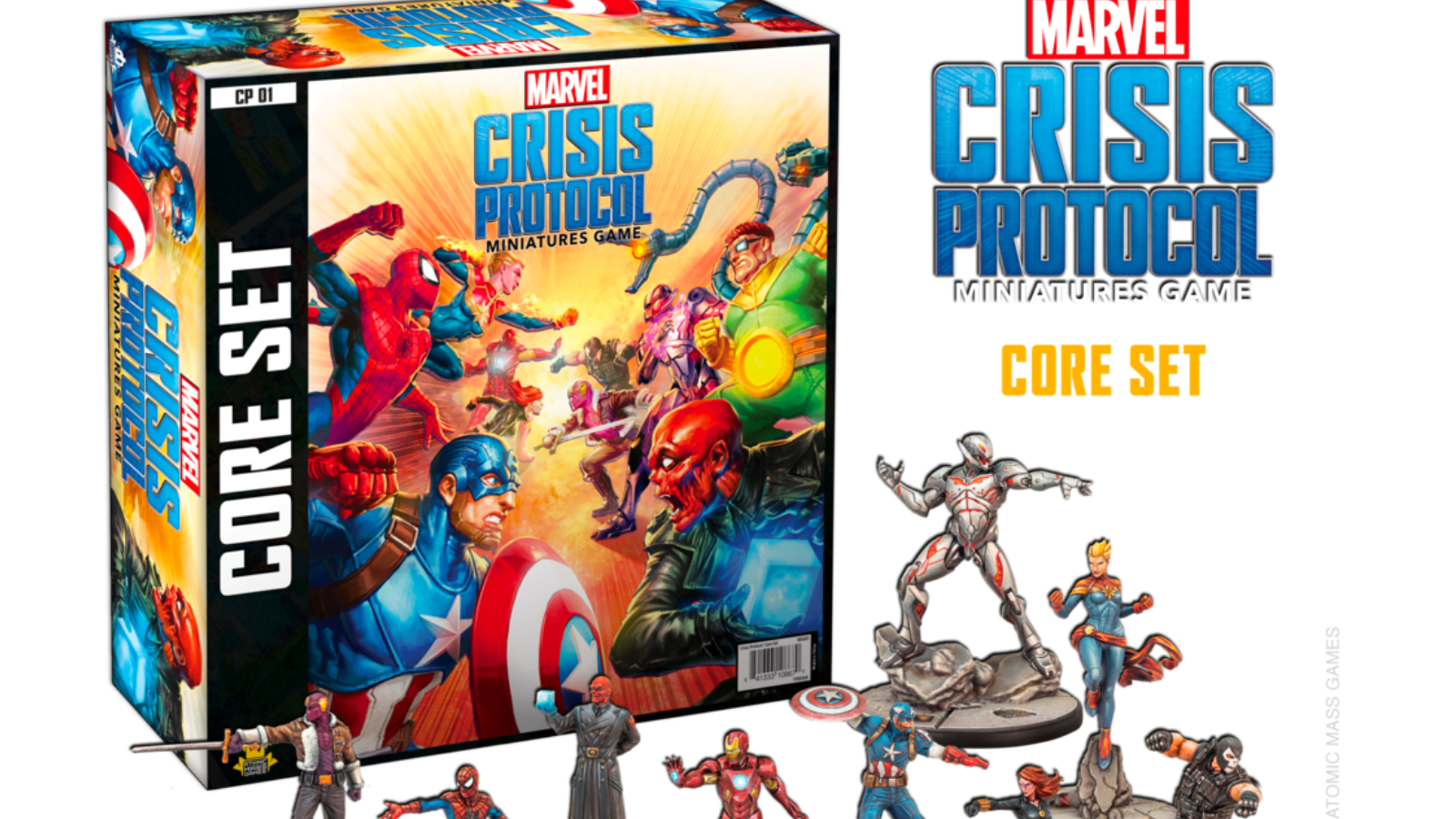 Construct teams of classic Marvel heroes and villains then battle it out through a variety of scenarios. Marvel: Crisis Protocol (MCP) is a tabletop skirmish war game that is fast paced and let’s you imagine all of those what-if team ups you’ve been wondering about. The core box is an excellent entry point with 10 easy to assemble models, all of the cards, tokens, and dice you need to get started and even comes with some fantastic terrain pieces to fill out your table. With dozens of characters to add to your game through expansions and more announced every month, the sky’s the limit. If you love skirmish games and Marvel, you will want to check this one out. The core set is all you need to get started and play full games. 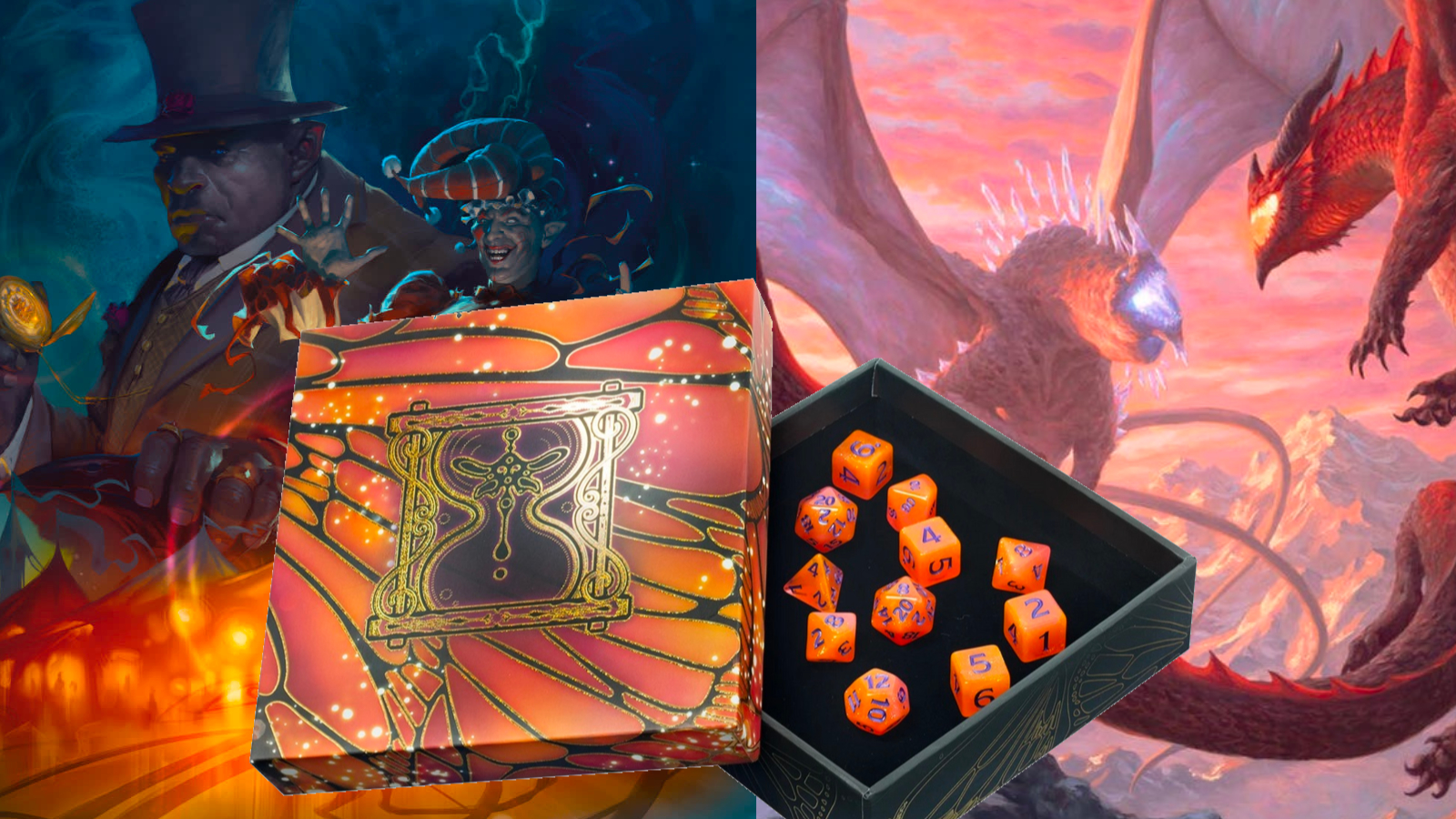 While it looks like 2021 will end up being a prelude to a much bigger year for Dungeons & Dragons in 2022 with 5.5 Edition on the horizon, this year’s product offerings pulled no punches. Wild Beyond the Witchlight is absolutely one of the stand-out campaign books for the whole line, putting a much-needed spotlight on the Fey and introducing the Domains of Delight. Meanwhile, Fizban’s Treasury of Dragons dares to balance the titular “dungeons” with a deep dive into “dragons”, formally mentioning the Dragonlance setting and characters for the first time in 5E, going even harder in the direction of a D&D multiverse with the new concept of Dragon “echos’ across worlds and settings, and pages and pages of enough rollable tables for every possible thing you think associated with dragons that would make an old Second Edition hardcover supplement blush. Round it out with another excellent Dice & Miscellany set tied to the Witchlight campaign and you’ve got more than enough to make a D&D fan grin from ear to ear.

Our Wild Beyond the Witchlight review | Buy it now!

Our Fizban’s Treasury of Dragons review | Buy it now!

More than a little science, more than a little fantasy, Starfinder has been distinguishing itself from it’s Pathfinder roots more and more recently, and the Beginner Box brings with it the opportunity to look at the game on it’s own merits and provides everything a GM and his players need to get started. The set’s basic GM and player handbooks provide the fundamentals, while the dice, pawns, pre-rolled characters and a dry-erase foldable map round out this packed set. The production value is high, the art is lush, and the value for the price point can’t be matched, and there’s a wide range of other Starfinder products to be had if you get hooked! 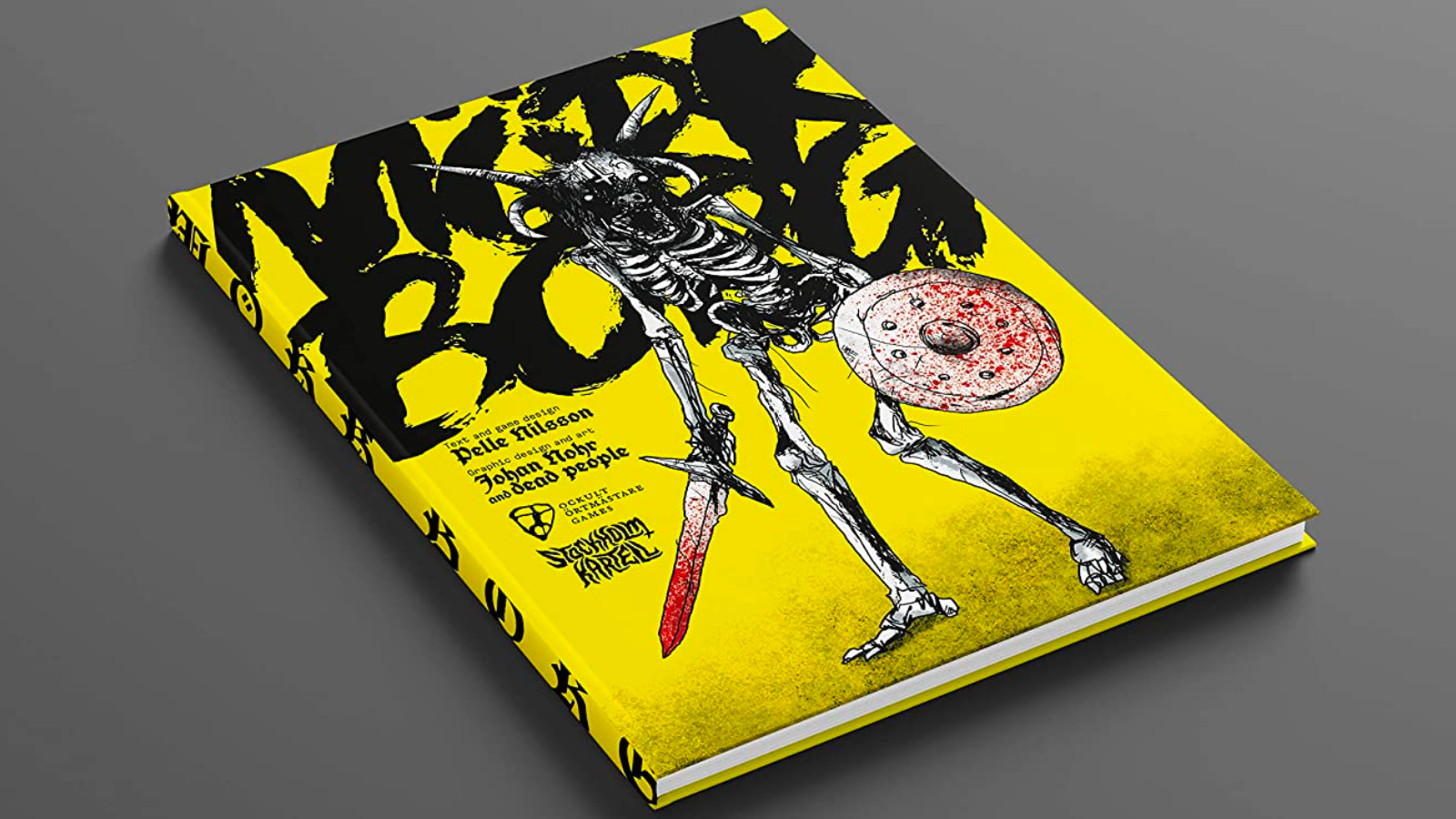 The end is nigh and there’s adventure to be had, scrabbling in the dust of dead gods. Mork Borg’s RPG by way of violent paint splatter source book sells every bit of its horror fantasy setting. A game replete with free support both official and fan-produced, you can learn to play in an instant but tailor the experience to your preferences. Venture unto dusk, and seize every last breath you can from this doomed mausoleum of a world. 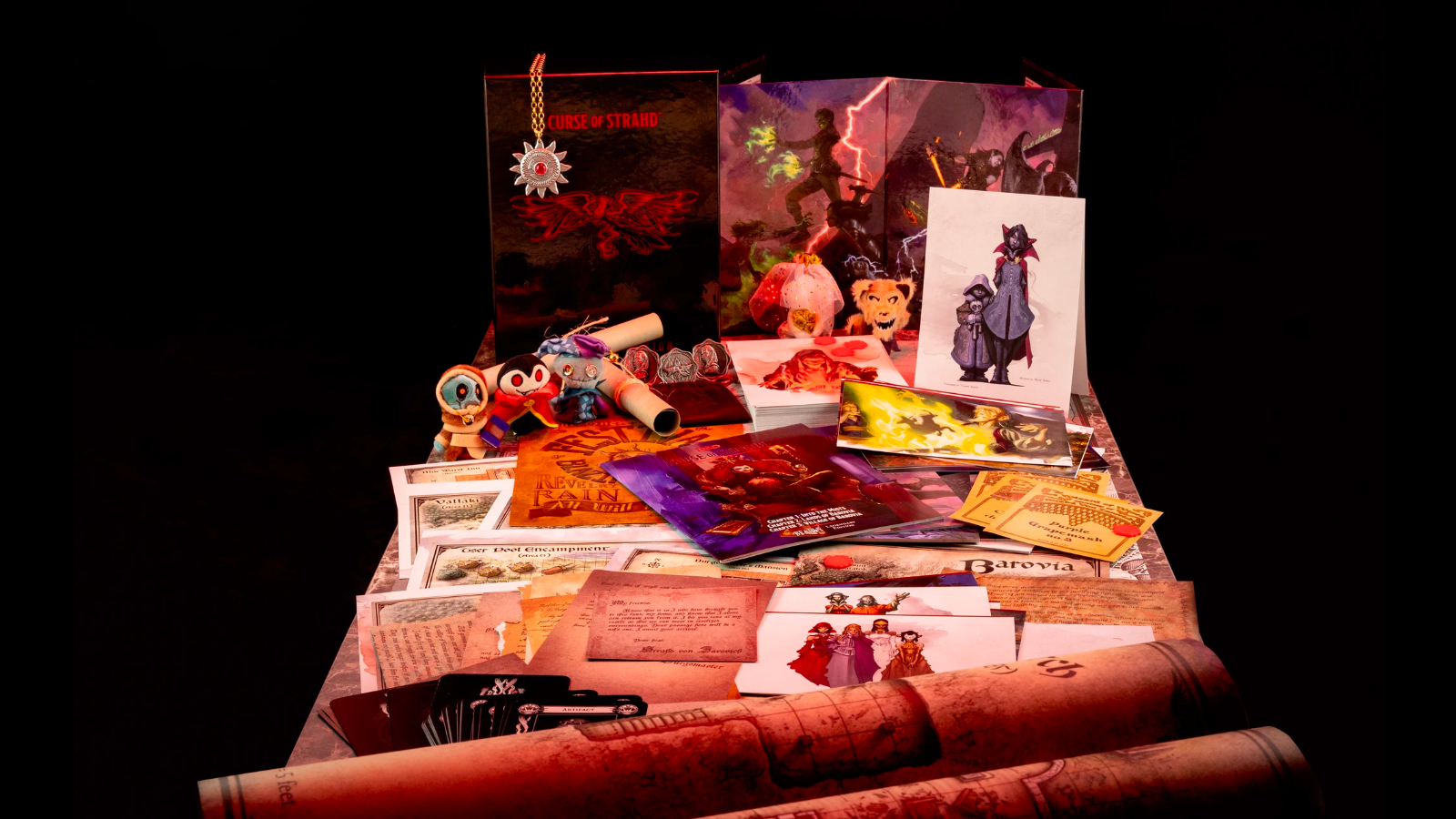 One of the best 5th Edition adventures was rereleased this year alongside a new supplement book (Van Richten’s Guide to Ravenloft), and the goblins at Beadle & Grimm’s couldn’t resist giving The Curse of Strahd the deluxe treatment with their Legendary Edition. Naturally, it includes all the goodies you’d expect from a B&G set- ‘exploded’ book that takes the revised hardcover and splits it up into smaller more manageable paperbacks, custom DM screen, additional adventures, gorgeously designed handouts- but also throws in a huge tube of 28mm scale maps that lays out the entirety of Castle Ravenloft and adorable finger puppets of the main characters of the adventure! Don’t let the price tag scare you away, this is a set that any DM would kill for!