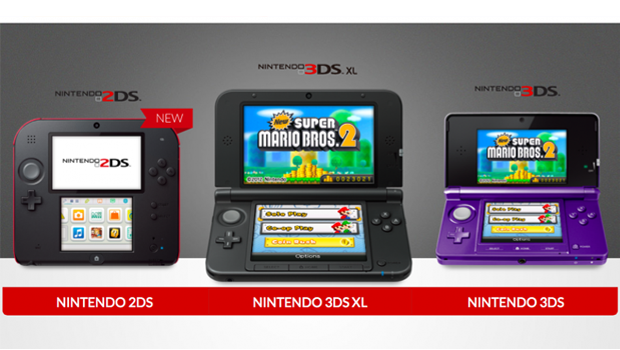 These new features, paired with Shigeru Miyamoto’s recent statements in an interview with Edge that Nintendo no longer wants to target “passive” gamers, seem to be a huge leap in the hardcore direction.

It’s all great news for the next Nintendo gaming machine, except for one seemingly small (read: GIGANTIC) problem.

The new handheld, set to be released in America sometime next year, is going to be called the New Nintendo 3DS; a moniker that will undoubtedly cause some uncertainty.

Nintendo already faced confusion when its Wii U system was mistaken for its predecessor, the Wii, by consumers and retailers alike. In a question posed on Ask.fm, former Nintendo head of digital content and development stated, “the name Wii U is abysmal. I think that cut sales in half right there.” But Nintendo doesn’t seem to be afraid of facing that exact same confusion again with the New Nintendo 3DS.

This befuddlement probably won’t be felt by anyone who follows gaming news closely, but I’d imagine that a consumer even slightly unfamiliar with Nintendo’s extensive DS library trying to purchase a 3DS will soon play out like a terrible rendition of Abbot and Costello’s famous “Who’s on first” bit.

Add in the confusion that I already hear happening in retail stores concerning the difference between the 3DS, 2DS, and classic DS compounded with the various size options for the multitude of versions of each and you have the makings of at least ten YouTube parody videos. And that’s not something I want to see for a long list of reasons.

The real tragedy here is that the New 3DS has so much potential. Nintendo has already announced that they are porting the Wii game Xenoblade Chronicles to the New 3DS, and hopefully some other Wii titles will be ported in the future. A lack of buttons and processing power has been holding back Nintendo’s handhelds since the early days of the DS, which this New 3DS promises to deliver. Every aspect is a huge leap forward, so why stick with such a stagnant name?

I’m hoping that the New 3DS is a successful handheld. There are people out there who want a hardcore experience on the go, but with the New 3DS coming out of the gates with the odds already stacked against it because of something as simple as a name, things look pretty grim.