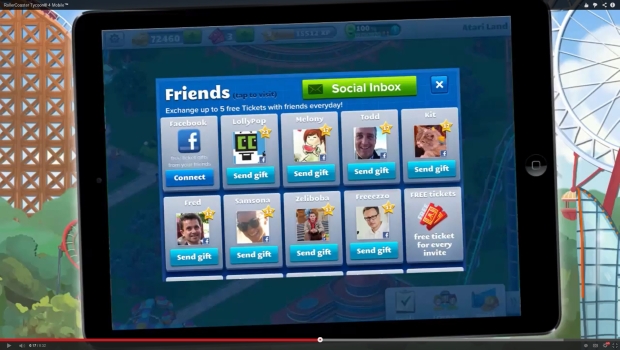 So here you’ll find the announcement trailer for Rollercoaster Tycoon 4. While I’d normally be excited, the word Mobile was added to the end.  This screenshot below hints on social integration (potentially good) but the mention of a limited number of tickets immediately douses this otherwise great announcement in the thing that I dreaded the most – the double whammy of cheap mobile ports and disincentive-based gaming.

Outcry has been overwhelmingly negative towards this step.   Could this be the Candy Crushification of one of our most beloved franchises?  One look at the (at the time of this writing) near-7000 thumbs down ratings compared to just over 150 thumbs up on the announcement trailer alone should send a message.  A deeper look at the trailer tells more of a story though.   From a hardcore coaster fan’s eyes, here’s what I see:

These are obviously very early impressions gleaned from a trailer, but as a fan, I’m very, very worried.  iOS-only slaps all Android users in the face as well, but it’s those of us who have spent dozens (or far more) of hours creating and cultivating incredible theme parks.  This is the equivalent of going into the building mechanics and charging your patrons to use the bathroom.

At the time of writing, Atari promises another Rollercoaster Tycoon title on PC, but rumors out of GDC indicate it’s a browser based Facebook title.   Until we have more than the following tweet from Atari, we’ll have to wait and see.   If anyone from Atari would like to send our mind at ease on this, I’d be more than happy to hear it:

RollerCoaster Tycoon is back and it's coming to mobile! Rest assured, there is a PC experience in production now for release this year!

Below is the full press release regarding Rollercoaster Tycoon 4 Mobile.

New York, NY – March 17, 2014 – Thrill ride seekers and amusement park enthusiasts should grab their spot in line for the next great rush as Atari, one of the world’s most recognized publishers and producers of interactive entertainment, today announced the launch of RollerCoaster Tycoon® 4 Mobile™, for iPhone, iPad and iPod touch. RollerCoaster Tycoon® 4 Mobile™ will offer 20 pre-designed coasters as well as a bevy of new attractions and features to provide long-time fans and new players alike an exciting way to customize theme parks and construct electrifying roller coasters on iPhone, iPad and iPod touch.

Based on the popular RollerCoaster Tycoon® franchise, RollerCoaster Tycoon® 4 Mobile™ is the reimagined next installment of the beloved simulation game and will allow players to create and share the greatest amusement parks their imaginations can conjure. With Facebook and Game Center support, people can also invite and visit their friend’s parks and exchange roller coaster blueprints.

“We are thrilled to bring RollerCoaster Tycoon® 4 Mobile™ to iPhone, iPad and iPod touch for the first time and allow players to experience the game in a new channel,” said Fred Chesnais, Chief Executive Officer, Atari, Inc. “RollerCoaster Tycoon® 4 Mobile™ is a modern-age simulator with robust strategy gameplay and will also contain social features, leaderboards and achievements to provide a truly engaging experience.”

The RollerCoaster Tycoon® 4 Mobile™ App will be available for $2.99 from the App Store on iPhone, iPad and iPod touch or at www.AppStore.com.

Ron Burke is the Editor in Chief for Gaming Trend. Currently living in Fort Worth, Texas, Ron is an old-school gamer who enjoys CRPGs, action/adventure, platformers, music games, and has recently gotten into tabletop gaming. Ron is also a fourth degree black belt, with a Master's rank in Matsumura Seito Shōrin-ryū, Moo Duk Kwan Tang Soo Do, Universal Tang Soo Do Alliance, and International Tang Soo Do Federation. He also holds ranks in several other styles in his search to be a well-rounded fighter. Ron has been married to Gaming Trend Editor, Laura Burke, for 21 years. They have three dogs - Pazuzu (Irish Terrier), Atë, and Calliope (both Australian Kelpie/Pit Bull mixes).
Related Articles: RollerCoaster Tycoon 4 Mobile
Share
Tweet
Share
Submit