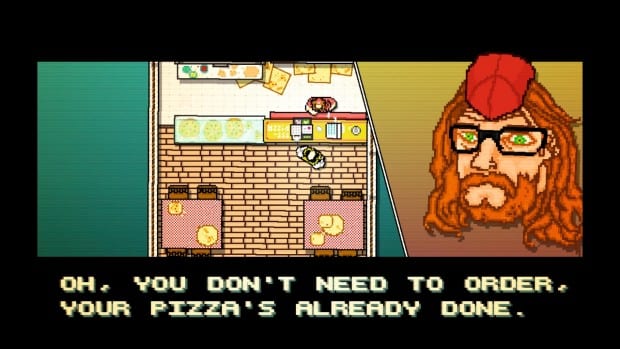 Man, 2012 was a weird year. This was the year that indie and downloadable gaming no longer feels separate from its big boxed counterparts. The level of quality and amount of game within these ten-to-twenty dollar downloadable titles easily meets or exceeds the depth and scope of huge, multi-million dollar productions. It’s kind of amazing that only one of the games on my list is a major retail release, and even then, it’s a title in a hugely niche genre. Read on for a list of what I thought were some of the best gaming experiences of 2012. Yes, it’s a numbered list, but I feel that each of these games are equal in quality in their own different ways, and all are worth your gaming dollars.

When people ask me what my favorite games of the year were, I always start with Hotline Miami — if only for the soundtrack. I mean, if I were ranking this thing on music alone, Hotline Miami would easily win this thing hands down. The entire game is so delightfully unhinged — if someone were to make an NES game based off the films American Psycho or Drive, this would be it. Splash in some neon, an unreliable narrator, and a bit of the ol’ ultraviolence, and you’re halfway there. Plus, that soundtrack. It embodies that coke-and-palm-tree vision of Miami in the 1980s to absolute perfection.

Fez takes the concept of interaction within a 3D environment on a 2D plane and wrings out every single drop it possibly can. That moment when I spun the camera around for the first time and realized there were other hidden objects around every corner drew me in — the moment when I realized there was an entire language and history to decode kept me going. There was always something hidden underneath the surface to discover, and that feeling of whimsy never left me the entire time I played. The beautiful pixel graphics and amazing soundtrack definitely helped.

Journey embodies everything I love about smaller indie games. It gets in, spends 3 hours telling the story it wants to tell, and gets out. Rather than being left with a bloated mess most of these huge blockbusters can end up as, Journey creates some of the tightest, most compelling three hours of gameplay ever seen on modern consoles. To say that Journey is magical is an understatement, and to say any more about it would ruin the experience.

As the only “big-box” title on this list, XCOM is very decidedly anti-mainstream. It makes a few concessions in the name of accessibility, but it gets about 95% of what made the original XCOM games great — crushing difficulty, consequence from player choice, and feeling that amazing rush of grabbing victory from the jaws of defeat. Kudos to Firaxis for providing such a faithful — and yet, modern — take on the classic turn-based strategy game.

Of course this game ended up at my number one position. The actual game parts are mostly ok, but the way it drew me into the plight of these incredibly multi-dimensional and believable characters sold me right off the bat. I found myself anticipating the next episode’s release with bated breath, and dropping everything I was doing the second each one went online. Every moment to moment decision felt like it was the difference between life and death, and for that, The Walking Dead tops my list.

A video game for people who love board games, it’s a sort of an electronic version of the fantastic board game Space Alert, but with permadeath and a procedurally generated universe. FTL is a grueling experience, even on its easiest difficulty setting, but it’s so easy to play in small bursts, and the desire to push further past previous accomplishments make this a hugely addictive experience. I absolutely crave an iPad version of this game.

The concept sounds so simple. I’m given a restaurant, I have to buy the ingredients and tools, and then each day plays out like that conveyor belt episode of I Love Lucy — customers order food, and in a series of quick minigames I cook that food, all while juggling several different orders at a time. It’s amazing how well it succeeds at this simple goal, as I gave almost an entire day of my life to that game, hunched over my iPad, still in my pajamas when the sun went down.

I've been gaming since my dad made the bad decision of buying me a Nintendo when I was four years old. Every day I'd find myself with my face glued to a TV screen, punching away at buttons, getting furious with Bowser, Dr. Wily, and those freakin' birds in Ninja Gaiden. Since then I have failed to get my parents to play any board game with me, I sold my full copy of Earthbound with box and guide for $300 to some dude in Austria for rent money, and I still believe in Nintendo even after all these years.
Related Articles: Cook Serve Delicious!, Fez, FTL: Faster Than Light, Hotline Miami, Journey, The Walking Dead, XCOM: Enemy Unknown
Share
Tweet
Share
Submit