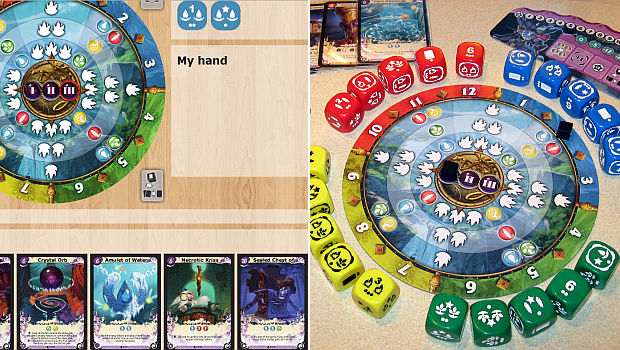 Ask most people if they want to play a board game, and few would expect to be handed an iPad.

Yet the convergence of traditional “analog” board games and their digital representations is one of the great triumphs of gaming, with digital versions of bestselling board game titles such as Ticket to Ride, Neuroshima Hex, Ascension: Chronicle of the Godslayer, Eclipse, and Agricola selling into the millions. In addition, websites such as Yucata.de, BrettspielWelt.de, Goko.com, and BoardGameArena.com feature online play of Dominion, Puerto Rico, Seasons, A Few Acres of Snow, Kingdom Builder, and many more games known better for their cardboard incarnations.

In what may be the final capitulation, Xbox LIVE has seen the board gaming light, offering The Settlers of Catan and Carcassonne, two modern classics.

What we are now experiencing in digital platform gaming is nothing short of a renaissance—all spurred by strategic board games.

But is this a positive trend for good old-fashioned board games, no nVidia GeForce required? And is it possible that cardboard, plastic, and wood can offer what pixels can’t?

Ticket to Ride won the top prize in tabletop gaming, the Spiel des Jahres, in 2004 and is one of the most successful board games of all time. When its maker, Days of Wonder, debuted the iOS version, sales of the analog game spiked.

Indeed, many board game producers expect a digital incarnation to drive sales of the boxed format. This time last year at Gen Con, Asmodee blew through its stacks of Seasons, a card and dice-based wizard battle, in just 30 minutes. One possible explanation: The digital version had been running at BoardGameArena.com for two months, and people liked what they saw.

Despite many analog board games going digital, some tabletop games don’t clone well.

Escape: The Curse of the Temple—think Yahtzee meets Indiana Jones– a push-your-luck, exploration of cursed ruins, pits everything on a mechanic that resists a digital incarnation: nonstop, cooperative dice rolling and matching, in under 10 minutes. No digital dice roll equals the visceral excitement of the real thing, as players scramble to roll, match their dice and others’, and race through the temple while an ominious soundtrack on CD counts down to doom.

Two of the hottest tabletop games are The Resistance and The Resistance: Avalon. Both games feature secret information reserved for each player, plus they play up to 10 people.

Despite initial successes at marketing the Wii as a platform that brings people together, most platform/computer/tablet game players play solo. Or if they do play as a group, it’s usually not face-to-face. The current surge in board game sales is driven in part because gamers felt something was missing in their solo digital gaming. Board games excel at handling large numbers of players. A game of The Resistance or Battlestar Galactica, where the object is to root out the traitors in a group, doesn’t translate well to a screen. Their success as board games comes from personal intimacy, where Bob’s eye twitch may the signal he’s a Cylon. How can a computer replicate the kind of negotiation and alliance-forming at the heart of longtime board game sensation Cosmic Encounter? Or how do five players, using their own cards, retain their character identities and work together on a single console to stop the spread of a virulent pandemic (especially if a traitor lurks among them) or survive together on Robinson Crusoe‘s island? Something gets lost in translation.

Your cards tell you what others cannot know. As much as digital games have tried to overcome that deficiency, the more players in a game, the harder it is to manage secret information. Most digital games get around this by allowing play for one or two players only, with the app’s artificial intelligence serving up the other foes. For a board game with many human players that need restricted info, this is often a dealbreaker for a digital incarnation played on a single console, computer, or tablet. Love Letter in digital? Unlikely.

Some tablet OS games let you pass the tablet for players to take turns. It’s a weak means of addressing the digital limitation of one device, several players. But what of games such as 7 Wonders or Libertalia, where players choose and reveal cards simultaneously? Dexterity-based tabletop games where multiple players interact with game pieces at once, such as Jungle Speed, present further problems for a digital translation.

The three-dimensional space of a board game matters to the senses. Rolling those beautiful dice in Seasons. Everyone slamming down  7 Wonders cards they didn’t want to pass. Painting Mice & Mystics miniatures. Watching and hearing another player inhale ominously before a devastating move in Terra Mystica. Hissing like a snake or ribbeting like frog in Snorta. Clubbing a teammate over the head with an inflatable club in Ugg-Tect. Board games offer sensory experiences the digital world still can’t match.

If you’ve never seen a living room floor overtaken by an invading space armada in Twilight Imperium III, then you’ve missed the epic goodness of a huge analog board game. Playing Memoir ’44 in Overlord mode, with expansion packs galore of tanks, amphibious vehicles, planes, and hundreds of infantry miniatures taking up a room as you and your player teams command the Axis and Allied forces–simply nothing like it. Now try to imagine that same majestic sprawl reduced to an iPad screen.

Other positives of analog board games resist digital translation. The judging of Apples to Apples. Drawing in Telestrations. Forming clay shapes in Cluzzle. The puzzle race of Mondo. The list goes on and on. Analog board games still offer experiences digital games can’t.

This isn’t to say that digital is inferior, though. Digital beats analog in the following ways:

As board gaming enters its golden era, gamers are growing more sophisticated, demanding games to challenge their abilities. Unfortunately for some board gamers, the complexity of rules, game piece interactions, and scoring threatens to overwhelm the actual game. Time dedicated to managing everything equals or exceeds time spent planning a winning strategy. Overlook one tile function in one turn in the game Suburbia, and you may have lost the game, even if you had a winning position. Bump a scorecard and suddenly your game of Seasons is wrecked. And just how do all those cards change values in Smash Up when you play that other card? Digital games offload game management onto the perfect manager: a microchip. Leave all the rules, calculations, and other accounting to the app and hardware.

(And now a rant: Too many analog board games today are burdened by this issue. If the digital version is that much smoother to play than the analog because of game management issues, why even make a ponderous, frustrating-to-manage analog version?)

Friendless? Social outcast? In need of a shower? Hey, digital games are your salvation! Let the app’s artificial intelligence be your foe. Sometimes, you want to play a game and no immediate opponents are waiting outside your door at 11 p.m. on a Tuesday night. A decent A.I. in the digital version of the card game Dominion gives you a foe who won’t complain that you’re still playing at 2 a.m. A good A.I. also helps you learn the game without judgment, so if you should play the analog version in the future, you’re already proven and knowledgeable.

Losing even one race chit in the analog version of Small World is a game breaker. Where are you going to store that massive box of Fortune and Glory? Something seems fishy when it takes as much time to set up the board for Hey, That’s My Fish! as it does to play the game. With digital, you avoid all the drawbacks of a physical game.

Game management, setup, and cleanup are issues with time as well. No shuffling of cards. No undoing moves because another player misplayed. No one asks, “Hey, whose turn is it?” Bam, bam, bam, the digital game plays out. Plus, with an A.I. foe, analysis paralysis vanishes. You’re not waiting 10 minutes for Joe Grognard to evaluate every possible position on the board. Games in analog form that might take two hours to play may take only an hour in digital. So you lost; the time you saved playing that game digitally means you could replay immediately, less likely in the analog form.

Both analog and digital versions of tabletop games have their place. Your preference for one or the other will largely depend on which positive qualities of each you value most.

Or heck, just buy both!