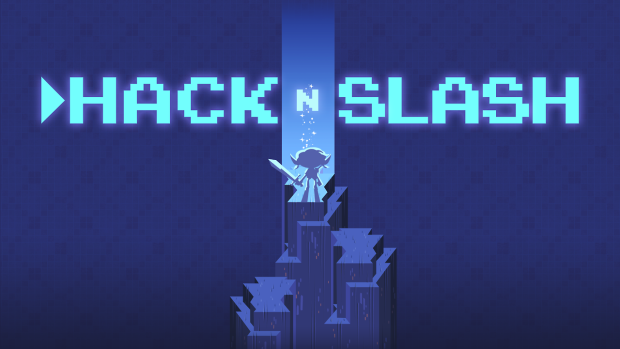 As to be expected with my first convention ever attended, “I’m lost as hell” was the only thing on my mind when I entered the Boston Convention Center. The main thing I saw, though, was a sign pointing me towards the Indie MegaBooth, which is all I needed. Of course, I eventually used my full brain and realized that all the booths have the developer/publisher name above them; but the most interesting things seen are always held within the Indie Booth.

Though not directly in the Indie Booth, Double Fine was within the vicinity so I glided over to play Hack ‘n’ Slash. This new adventure originally started as an idea conceived during the Amnesia Fortnight game jam, but will now be entering Steam Early Access here soon. It is a top-down puzzler based around manipulating the environment. You do this by selecting an item and accessing a menu which consists of a variety of options.

The demo begins with your character being dropped into a prison and finding a sword. You then swing at the cell door and fail to bust it open. This is when the reverse engineering aspect comes into play as you interact with the door and open a menu which says “Door is Locked” with the options beside it being true and false. As you can guess, with true, it stays locked. But flip it to false, and voilà, the door is opened.

From there, you move forward and gain access to things like bushes (which you can manipulate to give you a ton of hearts) and boulders (which you can set how many times it moves, the length of movement, etc.). It is pretty clear to see how this fascinating concept will build into a larger puzzle game. The main challenge for Double Fine is to now make sure it never becomes too tedious, such as what happened with The Cave.

Rogue Legacy was my personal Game of the Year last year. That being said, you mention that game around me and you can consider my attention grabbed. This is exactly what happened as I walked passed Discord Games’ Chasm booth. Once the controller was picked up, I was intrigued by the old-school visuals and surprisingly haunting story. A story that is topped off by some equally unsettling music that sets a solid atmosphere.

The aforementioned story is based around your main character getting a letter warning of his demise if he was to investigate a certain mine. This mine was once filled with miners, but has since become desolate. As any video game character would, he proceeds to head his ass directly into that mine. This is when the procedurally generated content begins to roll in, as the levels randomly generate each time you enter. Per the MetroidVania (and Rogue Legacy) style, you can also pop up a map showing you the outline of areas you entered.

The haunting atmosphere will be built upon by picking up notes and other small items throughout playing Chasm. Also, despite it not being shown (or me not being good enough to find it), you will eventually pick up an item that allows you to shoot magic at your foes, which can range from your everyday bat to a zombified miner. From its grasping beginning, Chasm sets up to be one interesting adventure that deserves your attention.

Also not directly in the Indie Booth, but still very indie, was Project Cyber. Project Cyber is a 3 vs. 3 multiplayer game, one where the developers, Spearhead Games, are striving for increased accessibility and an “easy to grasp, tough to master” kind of difficulty. From the early impressions, they seem well on their way. Project Cyber relies equally on each of the three teammates as one plays the role of goalkeeper while the other two act as a striker (attacks the opposing goal) and midfielder (stays mostly within the middle area of the field).

From your asymmetrical view, you control your character with the standard WASD controls, with space being sprint. But what really matters is the controls on your other hand. While left click is a simple push the ball motion, right launches the characters unique special ability, for example the goalkeeper’s ability forms a large wall directly in front of him. If you click in the mouse wheel, you will unleash the ultra ability, which can be very helpful but also takes a long time to recharge.

One other game changer are the special events that will be launched while mid-ways through a game. The two events being shown at PAX East were one that forces wind into the stadium (meaning the movement of the ball is altered) and one that splits the arena in half. While a fun attachment to the game, the most interesting thing comes in how Spearhead Games plans on integrating this into the final product. Staff members at the booth stated that they want this to be a game which is enjoyable to watch as well as play, and part of that enjoyment would come from voting on which element to unleash on the players. To do this, they are already in talks with Twitch and hope to lock down an official partnership soon.

As for actually playing the game, it is as exciting and intense as you would hope. The movement seems a bit loose at times, but apart from that, there is little to complain about. The special abilities add a strong variety to the gameplay which makes kicking the other teams ass even sweeter. Project Cyber is a free-to-play game that hopes to be on steam Greenlight soon. You can help Spearhead create this project by requesting a key here and providing them with any brilliant ideas your brain can create. If you do well enough, they promise rewards*!

*Your reward may simply be love