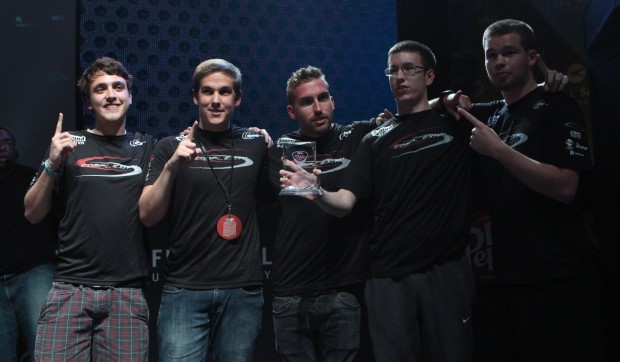 The top four NA teams in Black Ops II; compLexity (coL) Gaming, 8-12 UNiTE Gaming, OpTic Gaming, and FaZe Competitive, where there to prove who was the best Black Ops II team. In pregame interviews, all of the teams expressed how important it was for them to win this event and be known as the last to win a major Black Ops II tournament.

There was a lot of friendly trash talking between teams, Faze’s spaceLy and coL’s Clayster had a few words for each other in the training pen, and the OpTic crew had issues with UNiTE Parasite in the past. Everyone seemed to have a high level of confidence and competitiveness that was reflected in their play.

The one team that stood out from the rest was OpTic Gaming. Holy crap are these guys popular! I’m talking Lebron James, autograph lines out the door and around the building, wild screaming hordes of fans popular. I had no idea what an OpTic scumpii was, let alone that it was a person; but the crowd knew, and they chanted his name all the way through the first match.

[singlepic id=16920 w=320 h=240 float=right]UNiTE was heavily favored, coming off a 1st place finish at PAX and 2nd at Gfinity in London, but OpTic had the crowd on their side; and even though they couldn’t hear them through the soundproof booth, they could feel their energy and excitement.

The first game was Hardpoint on Raid. UNiTE took an early lead, but it wasn’t long before OpTic scumpii went on the assault and started tearing through UNiTE. He ended the match with 46 kills and OpTic took game one. Scumpii hulked out in the booth, looking like Chuck Liddell after a UFC knockout, and the crowd ate it up. Yesterday’s cheers for DotA 2 were cool, but this was insanity.

After the crowd settled, the next game began; Capture the Flag (CTF) on Slums. Round 1 went to UNiTE as they got the capture (cap) and were able to hold off OpTic. Round 2 ended in a similar fashion as UNiTE finished CTF 2-0.

Third game was Seek and Destroy (S&D) on Raid. An attack and defend mode, with no respawns, that makes for some of the most exciting matches. First to six rounds wins. Rounds 1 and 2 went to OpTic. Round 3 to UNiTE. Then every round after that was an OpTic victory, and the crowd was more and more amped after each one. NaDe was dominant with three round-ending kills. OpTIc took the series 2-1 and was moving on to the Winner’s Match.

[singlepic id=16918 w=320 h=240 float=left]The no.1 seed vs the no. 4, coL was heavily favored to take control of this series against FaZe. On Hardpoint Raid, compLexity took an early lead and didn’t lose control at any point.

In round 1 of CTF on Slums, coL came out strong and fast, took a quick flag, and then dropped back into a defensive set up to hold off FaZe for a 1-0 lead. In round 2, coL’s defense was excellent for most of the round, but FaZe made a clutch capture within the final two minutes to force a 1-1 draw. The game went into overtime and coL made an extremely fast capture in only 38 seconds. FaZe had one chance to capture a flag in less than :38, but was unsuccessful and compLexity won the series 2-0 to move on to the Winner’s Match.

The fan favorite versus the hottest team in Call of Duty: Black Ops II, OpTic Gaming vs. compLexity, the match everyone wanted to see.

The first game was Hardpoint on Raid. OpTic fans were going nuts for each and every capture. The game was back and forth with over eight lead changes, and fans were on the edge of their seats. Ultimately, compLexity pulled away and got the win, but it was an hard-fought game.

In game 2 they played CTF on Raid. Round 1 was a defensive game that ended at an even 0-0. Round 2 had a lot more action with the flag being contested multiple times on both sides. The crowd was on their feet as OpTic had so many chances to cap, but couldn’t finish. Another round went by without any team taking the lead, so they went into round 3 of 2 (confusing, I know). It was a good defensive game until coL TeePee made a clutch cap within the final two minutes.

[singlepic id=16926 w=320 h=240 float=right]In overtime, coL aches got a key early kill streak. NaDe proned behind enemy lines for an opportunity to sneak a flag out, but coL crimsix saw it coming and put him down right away. OpTic had one more push toward the end, but aches’ early streaks were used for a clutch kill and compLexity took the match 2-0, moving on to the Grand Finals.

The Loser’s Match featured two relatively new teams that were both hungry to prove themselves. FaZe and UNiTE had an excellent match that went back and forth.

The first game was Hardpoint on Standoff. UNiTE had been strong during the Pro circuit on Standoff and seemed to have an advantage going in. The game was fantastic, with 9 lead changes, until FaZe took a 60 second lead at the halfway point. UNiTE somehow climbed back to take the lead with less than 1:30. These guys were scrapping, but it was FaZe that came out on top.

Game 2 was CTF on Slums, and FaZe played defensively, trying to control the map and spawn points. UNiTE just had the better shot and two members got streaks. UNiTE made a final push and a clutch cap with only :10 to spare. Round 2 UNiTE started with streaks and the two teams went at it. It was flag, die, flag, die; the crowd really got into the closely contested battle. FaZe finally was able to get a cap and tie it up at 1-1, but UNiTE answered almost immediately with a cap of their own to win.

The final game was S&D on Standoff. This mode and this map were UNiTE’s bread and butter, but FaZe proved earlier that they could take a game on Standoff against UNiTE. FaZe took an early 3-2 round lead, but UNiTE swept the rest of the rounds and moved on to the Deciding Match.

[singlepic id=16924 w=320 h=240 float=left]In a rematch from the first set, OpTic looked to ride the fan’s enthusiasm over UNiTE and into the Grand Finals. They didn’t look worried when joking in front of the the camera right before the game.

Game 1 was Hardpoint on Slums, and was the best Hardpoint match of the day. OpTic looked unstoppable as they took a 100 second lead. UNiTE fought all the way back and pulled within 15 seconds of tying it up, but OpTic pulled away to another commanding 70 second lead. The game looked all but over, until UNiTE closed the gap once more to only 20 seconds. Parasite had a clutch knife kill that set up a chance to take the lead, but UNiTE couldn’t capitalize and fell in game 1, 250-206.

The second game would be CTF on Standoff. OpTic played smart and was constantly watching each other’s backs, which got them a 2-0 cap lead. At the end of the round, UNiTE got one cap to bring the within reach. Down 2-1, UNiTE got the first cap in round 2. OpTic answered back to go up 3-2 with only :30 left. Out of nowhere, UNiTE Killa steals the flag and blows past everyone on OpTic. Literally within steps of capping the flag, Killa gets hit by a grenade as time runs out and OpTic moves on to face compLexity in the Grand Finals.

OpTic had been playing lights out all day and compLexity has looked unbeatable. Both teams could easily take games off one another.

For much of the day coL Clayster, their star slayer, was nonexistent. That was not the case in game 1 Hardpoint on Standoff. Clay started of 13-0 and got streaks including the stealth chopper. CompLexity was hyped in their booth as Clay put the icing on the cake shooting a last ditch hellstorm missile out of the sky. CompLexity, lead by Clay’s 23-11 k/d, won 250-121.

[singlepic id=16943 w=320 h=240 float=right]OpTic was only able to take one round in S&D on Meltdown because TeePee dominated at 13-1 to help compLexity win 6 rounds with ease.

TeePee continued his success in CTF on Slums by sneaking behind the flag and juking his way to an easy cap. In the closing seconds, Clayster got off a triple-kill lightning strike that allowed crimsix to get another cap as time expired.

With a 2-0 lead going into round 2, OpTic had their work cut out for them. CompLexity just played it smart and defensive, and was able to hold of OpTic and go up in the series 3-0.

One more win and compLexity would be champions. OpTic Gaming had to fight back hard if they wanted to defeat compLexity. They were able to get out in front quickly on Hardpoint Raid and they absolutely crushed compLexity 250-88. They were still behind in the series 3-1, but they weren’t out of it yet.

The next game was the best of the day. S&D on Standoff. For five rounds OpTic was killing compLexity and it looked like they had found some momentum. One more round to win the game and make the series 3-2.

Round 10 TeePee gets NaDe again, 5-5. The game is all tied up, the next round could either mean a new MLG Champion or a game 6.

Round 11 compLexity comes out on top. Down 5-0, they climb all the way back and take the game 6-5. CompLexity Gaming are the MLG Full Sail Fall Champions.

Watch all the matches for free on MLG’s Official YouTube page.