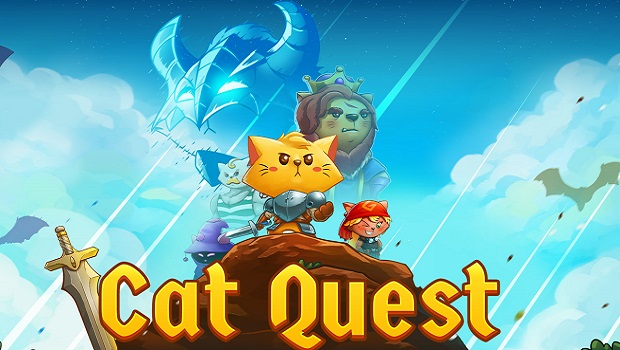 Fresh off the success of Slashy Hero, Singapore development team The Gentlebros has been hard at work creating its next game, Cat Quest; below is an updated gameplay trailer. We got to talk to Desmond Wong, CEO and Artist for The Gentlebros Pte. Ltd., about the game, its inspirations, as well as the development process.

Gaming Trend (GT): Cat Quest has been in development for a while now, with the game being Greenlit recently. What was your inspiration for creating this game?
Desmond Wong (DW): Besides our love for cats, we wanted to create an RPG with a huge emphasis on the overworld. We love the old days of Final Fantasy and other JRPGs, and wanted to see if we could combine the overworld from those games with modern open world sensibilities.

GT: Originally, Cat Quest was supposed to be a music game. What kind of things happened to make the game what it is today?
DW: It was a long painful journey which we documented here.

GT: Cat Quest takes some cues from classic RPGs. What are some of your favorite role-playing games out right now?
DW: I (personally) just got done with Persona 5, and utterly enjoyed it! Playing that game made me change some of the preconceptions of what I felt an RPG should be, and it’s sure to affect our design decisions going forward. However, I’d be remiss to say that I also thoroughly enjoyed The Witcher 3, and it still is one of my favorite games of all time! Final Fantasy 15 was also very memorable, and I love the direction the company is taking with the franchise. A few missteps aside, I strongly believe the next installment of Final Fantasy will be unbelievably awesome.

GT: In addition to PlayStation 4, PC, and mobile devices, you recently announced that the game would have a Switch release. What made you decide to port the game to the console?
DW: We always wanted to put our games on a Nintendo system, so it wasn’t so much of a ‘did we want to?’ and more of a ‘will Nintendo let us?’. Fortunately, we managed to snag a meeting with Nintendo with the help of Digipen, and after seeing the game, Nintendo loved it and asked if we wanted to bring it to the Switch too. Of course we said yes!

GT: Are there any obstacles or difficulties in developing for a newer console compared to PC or mobile?
DW: Absolutely. With older consoles, a lot of the difficulties and common problems have been solved. There are mountains of information out there about every possible technical difficulty you might come across. However, with a newer console like the Switch, everything is new, and everyone is trying to solve problems together. You might come across a bug that no one else has, and you have only yourself to depend on in such a situation. Fortunately, it seems there’s already a ton of support for the Switch and many developers are working together to iron out the kinks!

GT: You wake up one day and you become an animal. Which one would you be and why?
DW: Can it be a fantasy animal? I want to be a dragon!

GT: Are there any other projects that you’re currently working on? Updates on some things you’ve finished?
DW: All hands on deck for Cat Quest, but there is a design doc already written for another game also set in the Cat Quest universe…

GT: Finally, any last words to our readers? Maybe favorite foods or television shows?
DW: Not enough people watch this TV series, but please watch Marvel’s Agents of Shield! It’s simply one of the best television enjoyment you can get nowadays. The first half of season 1 is a bit slow, but once you get past that, every episode gets better and better. This is one of the rare shows I watch where every single episode was interesting and gripping(even Game of Thrones had a few boring eps here and there). Highly recommend this great series!

Wong also announced that Cat Quest will be available this summer for PC and smartphone devices, with a tentative release date of August of this year. PlayStation 4 and Nintendo Switch versions will be released at a later date. Stay tuned for more news here on Gaming Trend.