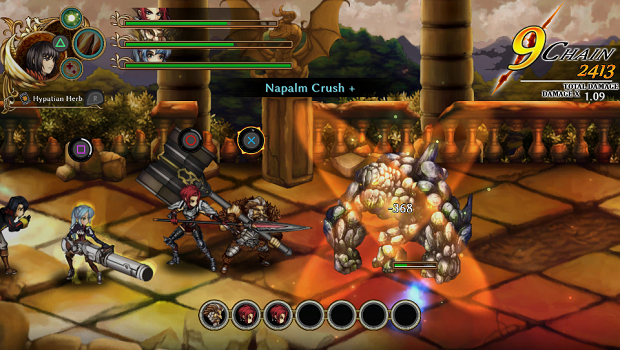 Gameplay screenshot of the Vita version.

Both versions of Fallen Legion will contain a different protagonist and story, albeit with similar gameplay mechanics. In Fallen Legion: Sins of an Empire for PlayStation 4, you lead Princess Cecille and a saucy, talking grimoire on a journey to restore glory to her family’s crumbling empire. You control her rival, Legatus Laendur, who is leading an army to overthrow the royal family in Fallen Legion: Flames of Rebellion for PlayStation Vita. Players will make choices during their playthrough which will affect Fenumia, an empire on a war-torn continent.

“At Siliconera, I covered many RPGs and deep down wanted to create one of my own,” said Spencer Yip, founder of Siliconera and director of Fallen Legion. “For the past three years, I have been working on Fallen Legion – designing story branches, programming characters and sometimes even creating visual effects to achieve my dream.”

Gameplay screenshot of the PlayStation 4 version.

Fallen Legion: Sins of an Empire and Fallen Legion: Flames of Rebellion will be released on Playstation 4 and Vita respectively on July 25. Stay tuned for more news on Gaming Trend.