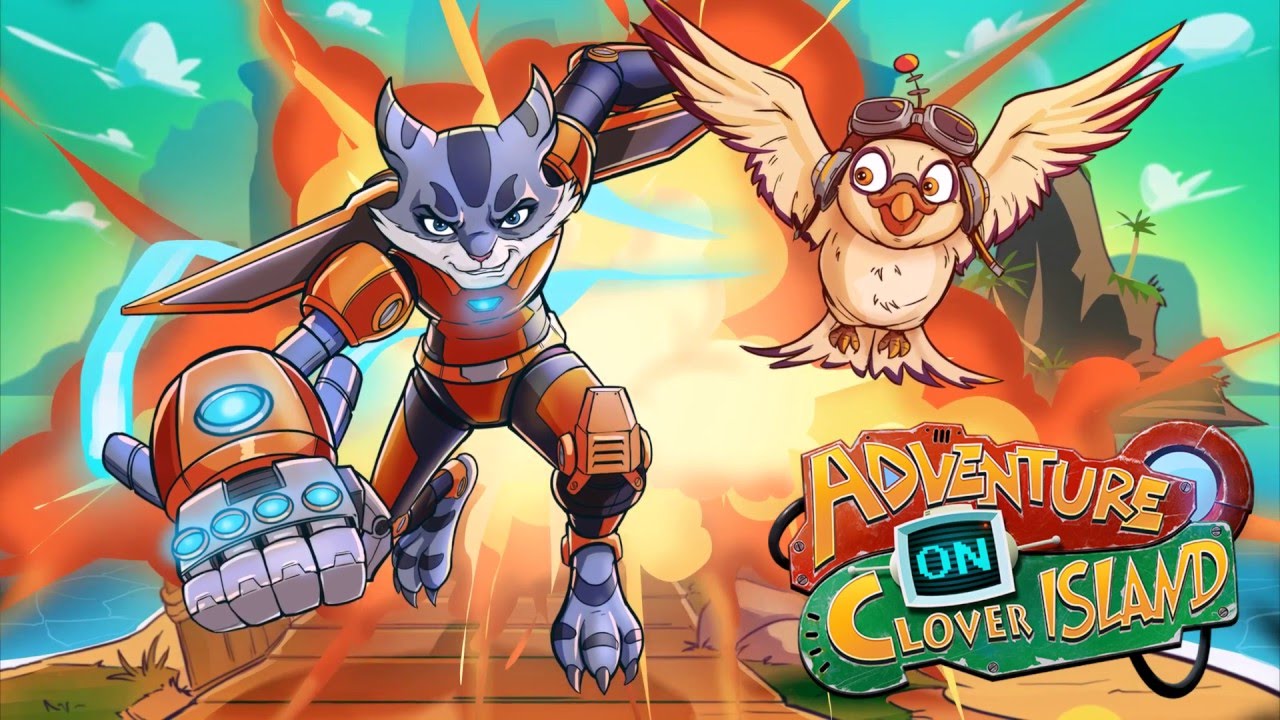 Many of us at Gaming Trend are huge fans of the 3D platforming genre, which has been all-but-dead in recent years, so naturally we were excited to hear about an upcoming indie 3D platformer called Skylar and Plux. Skylar and Plux features is all about a cat and an owl jumping around, defeating villainous enemies, and finding tons of hidden collectibles, and sounded right up our alley, so we sat down with Skylar and Plux developer Right Nice to get the scoop.

Gaming Trend: Tell us a little about Skylar and Plux. What is the story behind Adventure on Clover Island?

Eric Valentine: You are Skylar, a young but brave space-feline who gets kidnapped by the villainous CRT for unclear reasons. In his conquest of Clover Island he has rebuilt you into a weapon and almost wiped all your memories. A mysterious benefactor helps you escape to the island where you team up with the islander Plux to bring down the robotic overlord and restore peace to the island. Together you explore every nook and cranny, fight CRTs minions, and rescue the imprisoned natives of the island.

GT: 3D platformers have had somewhat of a resurgence lately with games like Yooka-Laylee and Ratchet and Clank. Why do you think now is such a great time to bring back this genre?

Leo Toivio: As a start I would just like to point out that we started development of Skylar & Plux: Adventure on Clover Island before Yooka-Laylee and Rachet and Clank was announced, we’re not the ones jumping on the hype train, we’re here to create it and give it more fuel. We’re missing these kinds of games and we want to see them come back. I believe that there’s room for all of us on the market, as long as the quality holds up. That’s why we’re focusing on creating a well polished experience before anything else. To summarise, Skylar & Plux is a response to the lack of modern 3D-platformers.

GT: Are there any games that have inspired the gameplay of Skylar and Plux? Does the platforming borrow any mechanics from games you’ve enjoyed in the past, or are you trying to make Adventure on Clover Island as unique as possible?

Leo: The whole idea for Skylar & Plux is to relive the games from the late 90s and early 00s, Our design philosophy is to try the mechanics that work and are fun in other games and combine them together with others to make variation. Much like League of Legends did with Dota. We’ve been inspired by many games, these include Jak & Daxter, Ratchet & Clank, Banjo-Kazooie, The Legend of Zelda. Just to name a few.

GT: A lot of older platforming games relied heavily on collectibles. Will Adventure on Clover Island have many collectibles?

Leo: The game will have secret collectibles hidden throughout the levels. They are there for the more experienced and explorative players.

GT: Skylar is a cat and Plux is a bird; How will these two characters function together? Will there be many moves that utilize the strengths of both characters?

Leo: That’s an ongoing discussion. Right now you can only control Skylar. Plux is more of a narrative addition to the game. He’s an inhabitant of Clover Island and knows a lot about the world whereas Skylar is a bypassing traveler that happens to get dragged into this conflict. Since we’re such a small team we’re really trying to make the most of what we have and only choose to implement the mechanics we think are the most valuable for the player experience. We have a few ideas for Plux but we’ll keep it in secret for now.

GT: What kind of ability upgrades can we expect to see throughout the game? Are there any abilities that you’re particularly fond of?

Leo: My favorite mechanic in the game has to be the time bubble that is activated from the time pedestals in the desert level. We’re going to have 3 upgrades in the game, one for each main world. I guess you’ve already seen two of them; the classic jetpack and time orb. We’ll show you the last ability once it gets a bit more polished. Here’s an exclusive hint, think magnetic…

GT: Tell us about the origins of Skylar and Plux. Is it true that it started out as a student project? How did it transition to becoming a full game that will be available at retail?

Leo: Let’s start from the beginning. The people that form Right Nice Games met during a games education program in Stockholm called FutureGames. It all started as a four week school project in January 2015. During these four weeks we created a game called Adventure on Clover Island that would become the prototype that was going to evolve into Skylar & Plux: Adventure on Clover Island.

When Adventure on Clover Island won the Swedish Game Awards we knew that we had to make the game into a finished product and release it on the market. That’s what triggered the creation of the studio Right Nice Games. At that time Right Nice Games only had one goal; to release Skylar & Plux: Adventure on Clover Island. Today it has grown into something so much bigger.

The school has been very supportive of our goals to release the game during our education, so we have been given access to their facilities around the clock.

We have learned a whole lot during the production of Skylar & Plux: Adventure on Clover Island and we believe that we can take that with us into our future projects.

GT: What sets Skylar and Plux apart from every other platformer out there?

Eric: We really are the indie underdogs, but we love it! It allows us to make it a very personal experience. We are young developers that grew up with this genre, whereas the other 3D-platformer games that have been coming out lately were created by long time developers, we feel like we can develop a unique game from another perspective. We tried to examine what we loved the most about 3D platformers and really make the game just about that. We distilled it down to three pillars; platforming, puzzling and combat and the entire game is very focused around them. The story and humor reflects our personal experiences as we draw from what we know. Who hasn’t been told who they should be, or what’s in store for them? We tell the underdog’s story, about defining yourself despite what bullies say.

Leo: We’re trying to bridge the gap between AAA and indie, it’s designed to be a AAA experience in indie format. Unlike many of the other 3D-platformers that are coming out today we’re not tied down to any conventions of a game series. We’re free to combine modern game design with the old. The game features unique characters and areas with personality that you’ll love. The music is heavily inspired by Banjo-Kazooie, is melodic and has many different styles and moods.

Leo: Who doesn’t like boss fights, right!? There’s going to be one boss in the game, the final one. The game is an experience focused on platforming, exploring a beautiful world and saving the island, but since we love bosses we wanted to put one in the game.

Leo: The game is going to be released on Xbox One, Playstation 4 and PC in January 2017! The console versions are developed by Grip Digital. Stay tuned!

If you’re anxious to check out Skylar and Plux in action, check out the trailer form E3:

Gaming Trend will be covering Skylar and Plux, and will have all the up-to-date news for you as it develops.