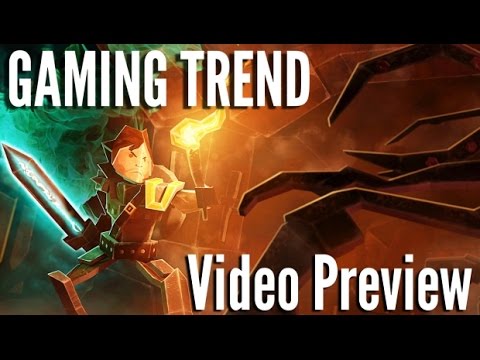 I think the meeting with the Thing Trunk team went a little like this: “Hey, what was awesome about the original Diablo?” to which somebody responded “The way monsters, crates, and barrels exploded!” and somebody else chimed in “Loot! Delicious loot!” and then everyone piled on about monsters, bosses, and how much fun dungeon descending was. Everyone forgot about the janky controls and inventory management. With the fun parts remembered, and the painful parts parsed, they then sat down and made Book of Demons — more than a little nod to Blizzard’s work, but in a way that is entirely unexpected — with papercraft and cards.

As the first of a multi-part project entitled “Back 2 Games”, Book of Demons tells a familiar story. You, the protagonist of the story, have arrived at a sleepy village with an old man, barmaid, gypsy, and various other expected characters, all of whom are beset by the evil emanating from the nearby church. Descending said church will put the player face to face with The Cook, The Antipope, and a wicked red Archdemon (swimming in a lake of fire while holding what is obviously an evil rubber ducky) at the bottom of the dungeon.

Look how evil that duck looks. LOOK AT IT!

Currently, only the Warrior is available to players, but soon a Mage and Archer will join the mix. So without much choice on character class, I set out on my journey.

The mechanics start very simple — you’ll find beasties of various makes and models roaming the upper floors, slowly shambling towards you with little paper hearts over their heads. As you mouse over them, your character will excitedly whack them until they run out of hearts. You can also click on them for better control of which creature is getting whacked — crucial when they start coming out in droves.

The game immediately begins to feel like it’s part board game and part action RPG as your character is bound to a specific path. Randomized, the levels feature little single-laned paths your character will ‘hop’ their way through, as if an unseen player hand is making them ‘walk’ to their destination. As enemies get stronger and more varied, you’ll find yourself backtracking to avoid getting hit, and carefully utilizing the dungeon’s health and mana fountains as you stumble on them.

Unlike an ARPG, the loot in the game comes in the forms of cards. The simple attack mechanics are augmented with cards that drop from foes and chests, granting additional attacks, elemental effects, armor, and more. That’s where mana comes in.

At least for the Warrior class, mana is used to fuel cards. With a limited pool, you’ll have to balance, as an example, an expensive suit of armor and a shield that can block 50% of incoming arrows, against a spell that lets you smite foes with a mighty fist from afar. Leveling up allows you to put additional points into your health or mana pool, so some pre-planning is important.

As you dive deeper into the dungeon, foes begin to sport special powers and attacks as well. Enemies might have a shield that your auto-attack won’t penetrate, requiring the player to furiously click on the shield until it breaks. Other enemies might explode, poisoning both friends and foes in range of their putrid popping action. With the minions out of the way, let’s talk about sub-bosses.

Sub-bosses are named creatures you’ll encounter that have special attacks. They may summon buddies that render them invincible until you dispatch those peons. They could also have a shield, explode with poison, freeze you, leap across the screen and stun you (a fun little ‘chase the stars to wake up’ mechanic works marvelously here), or a combination of those and many more. Add in the fact that they have to be dropped to zero health multiple times before they are dispatched, and are randomly placed in the dungeon, and you have a recipe for replay as well as surprise. At one point I ran into a boss and began to back up to set up my attack only to back into a second boss behind me. These tense moments take the semi-automatic combat from something simple to surprisingly strategic.

Ahhh, fresh meat that I’m cooking in a non-infringing way…

As you collect common, rare, artifact, and other ‘ranked’ cards in your dungeon diving, you’ll eventually come upon runes. These allow the player to upgrade the cards when given to a character in town (along with a wad of cash) to make them more effective. Maybe it adds an additional attack, or causes health-refilling hearts to fall from you when you are hit by enemies, but each upgrade makes that card cost more mana. In the beginning you can only equip three cards, but dropping cash in the hand of your friendly sage in town allows you to unlock additional slots. It’s almost like these people are using the demons as a way to rake money out of would-be adventurers, doesn’t it? The deck building mechanic makes each outing a little different as your equipped cards can change the tide of battle in an instant. It’ll be interesting to see if cards carry across to other characters, or if there are class-specific cards when the game is a little further along in development.

With a nod to classic ARPGs, prepare for some corpse runs. When you die, you unceremoniously drop to the floor, spilling cards and coin at your feet. You’ll have to hack your way through the critters that felled you to retrieve your precious loot, but since enemies don’t respawn, that hasn’t proven to be too much of a penalty.

When you’ve dug far enough in the dungeon you’ll eventually face off against a big boss. The Cook (I wonder if he works in the meat department, perhaps as a butcher?) is significantly larger and more dangerous. Just like in Diablo, the promise of varied and powerful loot keeps you diving and taking out bosses and baddies to fill your pockets.

The quirky and fun art style keep you digging deeper and deeper each time. But what if you only have a little bit of time for dungeoneering today?

Book of Demons (and I suspect the other eventual worlds that’ll join it) sports a system called Flexiscope. Flexiscope lets you run a quick mission on five different settings from Very Small (5 minutes) to Very Large (nearly an hour). Larger missions brings more monsters, but more monsters means more loot. The risk/reward is that you’ll occasionally find hidden goodies that go into a magic cauldron that you can pay to unlock in town. Be careful, though — if you die, all those rewards are lost. You can’t just snap up the rewards every time you go to town, though, because every subsequent dip into the pot costs increasingly larger sums of gold. It’s a good incentive to keep you digging in the dirt, and the eventual unlocking of the other classes should incent even further.

The Flexiscope system is pure genius.

While the game is still pretty early, it’s already off to a great start. I’ve taken the liberty of recording the first 25 minutes of gameplay to give you an idea how card progression and combat works, as well as a good look at aesthetics and the unique papercraft style.

Book of Demons - gameplay preview [Gaming Trend]
Book of Demons is available on PC Early Access right now, with an eventual console debut exclusively on the Xbox One. Stay tuned…this one is pretty cool, or better yet — pick it up for yourself in Steam Early Access and take the first book for a spin.