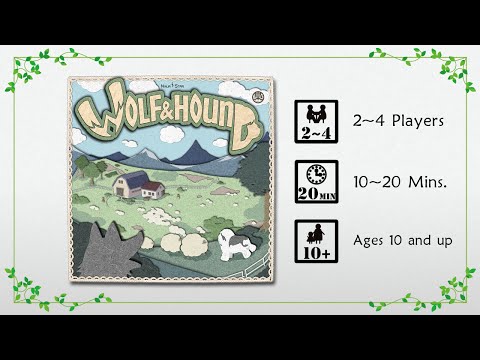 When you look over Kickstarter, family friendly games aren’t exactly the norm, and certainly not ones about protecting sheep. Well, we have a great example of both in a game called Wolf & Hound, and it’s entering its final week of its Kickstarter funding effort. We sat down with Ninja Star Games to find out exactly what’s up with Wolf & Hound.

Simple and engaging for anyone 10+

It turns out that Wolf & Hound is a partnership with famed Japanese board game creator Fukutarou. Fukutarou’s game “Tamamooool: Defend the Egg” has been rebuilt into a cooperative team-based game (a rarity in the board gaming world), and Ninja Star Games is bringing it to the United States and Europe. Here’s a little bit about the game:

In Wolf & Hound, you become a shepherd in French Alps where wolves are becoming a problem as they chase your sheep away from your pasture. It is up to your reliable hound to go find the lost sheep and bring them back!

The game is played as a 2 versus 2 partnership game. Your goal is to protect you and your partner’s sheep from being chased away by the evil wolves. You will win the game if one of your opponents loses all his or her sheep first.

To start the game, team members will sit across from each other. Each player will start with 3 sheep in their pasture, and 4 cards in their hand.

After you play a card, you will draw a card. Then the game continues to the player to your left. This continues on until one player loses all his or her sheep, or until the draw deck is depleted and players play all their cards.

Move the wolf and the hound wisely to protect you and your partner’s sheep, and chase away your opponents’ sheep!

There are so few family-friendly games, much less ones that are cooperative

The best news is that you don’t have to take my word for it — here’s a video that shows off the game in action. In its basic form, it can be played in three minutes, though there are some advanced rulesets for older kids.  Check it out:

Wolf & Hound - How To Play Video

As I mentioned, the game is on its last week for their Kickstart, and they are very close to their very-reasonable $10,000 goal.  Dan Kobayashi and his team have brought another game to life called The Majority, so this isn’t their first rodeo.   If you’ve got a young little geek in the making, take a moment and check out Wolf & Hound.

If/when the game funds, keep an eye out for our TableTop team to review this for ourselves!