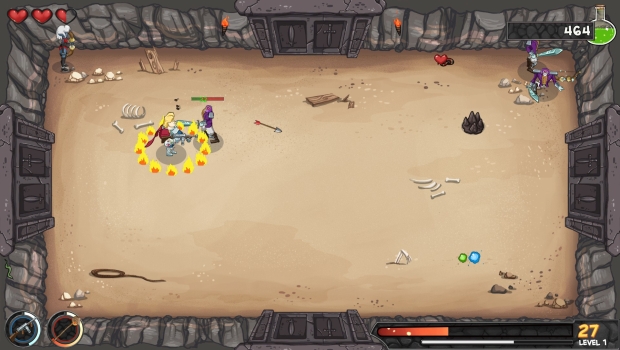 We often take our equipment for granted. The swords, armor and shields we level up time and time again are permanent, steadfast allies in our fight against hordes of nasties and baddies. But what happens when we refuse a witch’s request to save her village and are cursed to have all our equipment gradually destroy itself?

That’s the setup to The Weaponographist, a new roguelike arena-brawler with a really difficult title to repeatedly type out. You’re a less-than-likeable hero with a single task: kill all the monsters in the village to lift the decaying curse placed on you by the town witch.

You can upgrade any weapon you can find, but you’ll have to pick it up in the dungeon first.

The town is an ever-deepening dungeon filled with both typical fantasy enemies, like drow bow-women and pike-wielding goblins, and some strange additions, like a circus lion with a whip and a band geek with a tuba-laser. To take them down, you’ll have to kill them and pick up their weapons, all of which have a number of uses before they shatter and you have to find a new one.

Luckily, you can upgrade between deaths at the town hub, using goo acquired from murdering monsters below. There’s your standard health upgrades, weapon upgrades, and a few cool upgrades, like increasing the amount of time you’re invulnerable after taking damage.

The hub provides upgrades and new abilities to spend goo on.

Progression through each dungeon “room,” however, was very repetitive. Enemies come in a nice variety, but rarely do you ever see all of them on-screen, and usually on the last room of the level. Bosses are interesting, but even the first boss you face is a relatively easy-to-fight enemy who just spawns a ton of enemies. As levels go on, enemy variety increases and you get to play with more interesting toys, graduating from bows and arrows to chainsaws and machine guns. The initial slew of levels, however, show that the game’s strength is in having a variety of enemies, as that correlates directly to the player having a variety of options in combat. Less enemies early on means less options, and combat can feel stale in the beginning. The game picks up speed significantly after the first world though, once upgrades have opened up and you have gained a decent variety of enemies to grab weapons from.

Using spells and weapons effectively is key to progressing farther in the dungeon.

The mechanics that do fascinate, however, balance out the tedium of repeating early levels to grind out goo (the game’s currency) for upgrades. The combo meter’s integration with the experience system was cool; the more you kill, the higher XP gains become, but let the combo meter hit 0 and you start losing XP. The weapons themselves are great too, and there’s a lot of fun in quickly switching styles mid-fight. You might be swinging a sword haphazardly, then switch to a dead foe’s machine gun and back up, spraying the crowd, before activating a fire spell and charging back in with a new CQC weapon.

Weapon durability is a controversial mechanic, but The Weaponographist has found an interesting method of turning that tired system into a compelling concept for a game. Hopefully some time spent polishing and fine-tuning will trim the fat around the interesting underlying mechanics.

The Weaponographist will release April 29, 2015 on Steam.