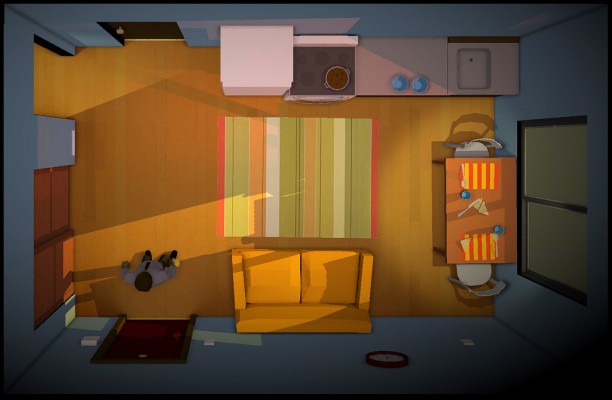 Restarting time is a tricky concept to tamper with. You see many films do it, putting the main character in a situation where he/she is experiencing the same situations over and over again. Some of these films succeed such as Groundhog Day, Source Code, and Edge of Tomorrow, while some falter. Have you ever heard of Plus One? There’s a reason for that (it’s a solid, slightly stupid movie, check it out). Time loops can bring about some interesting concepts and questions, but it can also become repetitive very quickly.

This is one of the core reasons why the concept has been infrequently used in video games. The idea of introducing a concept that could potentially make a game repetitive is something developers stray far away from. Luis Antonio, an independent developer, threw that fear out the window with his upcoming project Twelve Minutes.

You begin the game exiting an elevator, which immediately introduces you to the minimalist aesthetic of Twelve Minutes. The walls and ground have very simple textures, with no flash to be seen, as you would expect in an apartment hallway. As you approach your apartment and open the door, your wife, who is exiting the bathroom, greets you. Both you and your wife also have a simple design, with more of an emphasis on the apartment around you. Due to things not being overtly flashy, it really helps you get a grip on your surroundings, which makes solving puzzles not only easier, but also more interesting.

In your first playthrough, you will more than likely make the choices that lead to eating dinner with your wife, her admitting she’s pregnant, and then a cop comes in and kills you while saying your wife is a murderer. This is when the first time loop takes place, which is really made more shocking due to the sound effect that plays each time you restart. No matter how your current sequence of events ends, you are hit with a sharp sting of noise that immerses you right out of your current playthrough, and back to the start of events.

You then reappear back in your doorway as you entered your apartment. Your main character becomes very confused about the whole situation and begins to wonder what the hell is going on. Then, as it happens last time, your wife exits the bathroom and tells you to let her know when dinner is ready. This is when the real exploration opens up, as you start to look around your apartment for clues that would tell you either what is going on, or better yet, why the cop burst into your apartment intending to arrest your wife.

You will find a variety of objects littered across your apartment that will help you further the story each time. But once the clock hits twelve minutes and the cop enters the door, it is very tough to get anything done before he either knocks you out or kills you. Because of this, time is of the utmost importance, as you want to stride around each room quickly in order to check out everything that seems to be of use.  These objects can include things such as a simple knife, all the way to an item given to you as a present in your first playthrough. In typical adventure game style, these items will combine with one another and form into other useful aspects of the game. Antonio stressed that he never wanted the player to feel totally lost, so do not expect any kind of chicken-with-the-pulley situation in Twelve Minutes. That being said, the difficulty was evident from just a half hour of playtime.

Antonio wants the player to be able to explore the environment and decipher the many intricacies, but also challenge them properly and bring back the adventure in the adventure game. One way he achieves this is by integrating dialogue that acts as a sort of tease at some of the things you may have to do in order to advance the story. During my playthrough, I picked up on a few lines while missing a lot, according to Antonio. This just goes to show you there is a whole heaping of hints to take from the well-crafted dialogue.

Luis Antonio is currently working on The Witness, the project being spearheaded by Braid creator Jonathan Blow, she says that his off-time is when the real work begins on Twelve Minutes. Because of that, there is no official release date or time frame for the game; but Antonio did say that once the work on The Witness is complete, all of his attention will shift to Twelve Minutes in an effort to get the game published and in peoples hands.

The best games are the ones that come out of nowhere. Very few people were heading into PAX East 2015 with Twelve Minutes on their mind, but countless numbers are leaving it with the game firmly implanted in their memory. It is one of those games that when you have stopped playing it for around thirty minutes, you feel like you have thought up dozens of possible puzzle solutions, which makes you just want to keep coming back. While it may be a small indie title created by one man, it was easily the best thing I played at PAX East 2015.

Now, if only I could figure out how to stop getting stabbed by the cop.