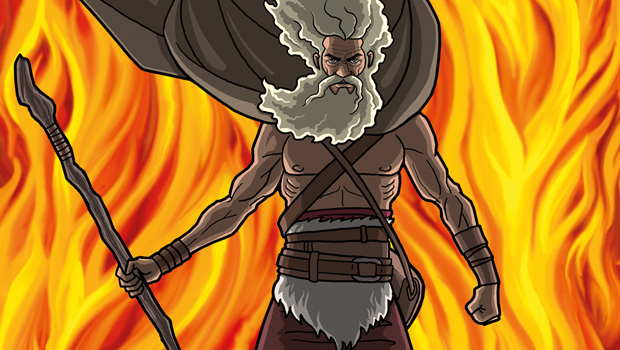 Sometimes it is difficult to find unique mechanics within gaming, whether they be video or tabletop.  However, that doesn’t mean that new ideas can’t come from established mechanics.  When I heard about Kings of Israel, I thought that a cooperative worker placement game was something that I hadn’t seen before.  I contacted Lance Hill of Funhill Games to find out more about how he came up with the concept.

I am Lance Hill, President of Funhill Games and the designer of “Kings of Israel”.

High school was the beginning of my love of strategic gaming with Magic: The Gathering. A friend of mine had bought a few packs and asked if I wanted to try playing it with him, this was around the Ice Age expanstion. I was always willing to drop everything to play a board or card game so I was in of course. I did not expect to be in for about three years though. Deck building was probably my favorite part of the game, and even if I had a deck that won a tournament the week before I would always come to the next tournament with something completely different. Eventually my part-time job caught up with me and I fell out of the scene.

Later in college I wanted to see what were supposed to be the best games out there and came across boardgamegeek.com. I still had that strategy itch that needed to be scratched so I went to the mall and bought some games that I thought might work with my roommate and I. I think my first purchases were for Attika, Settlers of Catan: The Card Game, Bohnanza, Alhambra, and Acquire. Attika and Settlers of Catan: The Card Game both hit me hard, and later when I got involved with a gaming group my collection boomed.

How would you describe the mechanics in Kings of Israel?

Kings of Israel is primarily a cooperative disaster management game with a splash of resource allocation and management. Each player takes on the role of a line of prophets keeping evil in check while trying to build the altars needed to win the game. The big decisions in the game come from how to use the actions each player is given, and when to try to press forward with the building of the altars. If the team decides to push hard with removing evil and idols from the board, then they might not get the altars built in time to win the game. On the other hand, if the team works mostly to build the altars then they might be quickly overwhelmed by evil and lose the game.

The altars themselves can be used to make sacrifices which cause an evil removing bomb to go off, if-you-will, in the region it is made, so they are not just “useless” objects. This can make building an altar a short term priority on the board too, and I think this causes a bit of push-your-luck for the players on many turns. Do the players try to cooperatively get the resources together this turn to build an altar and make a sacrifice at this dangerous location, or do they play it safe and remove the evil manually? If they try to get the altar built and sacrifice made, maybe they do not get the resources they need and evil spreads from that location. On the other hand, removing the evil manually will guarantee they are safe, but they do not make progress towards winning the game and instead fall a little further behind on their goal. There is a bit of a balancing act that the team needs to perform each turn.

Finally, good and bad events occur depending on what king the players are living under that turn. Because of this ebb and flow of good and bad things happening, the players need to make sure they prepare accordingly and primarily build altars during the good/better years and hunker down during the years of chaos.

What has people’s reaction been to the theme?

I have seen three main reactions to Kings of Israel because of the Biblical theme. There are many people that are very excited to see a Biblically themed game that is strategic and fun, since Biblically themed games are almost always terrible. This group has been extremely supportive, and have probably worked as hard as I have to get the word out about Kings of Israel. This would be the first group.

I would say the second group of people are mostly neutral and say that as long as the game is fun that they will play Kings of Israel, regardless of theme. For example, if that person is atheist they would play Kings of Israel the same way as they would play a game about Greek mythology. To them the events, locations, and flavor text are all there to set the mood of the game, and that is fine.

Finally, the last reaction type is from the gamers that will never play Kings of Israel because of the Biblical theme. Some of this might be because of the terrible history of Biblical games, and that is understandable. Some of the reaction seems to be out of fear of being preached at, although I don’t think anyone would feel that they are being preached at while playing Kings of Israel. Maybe if a person followed Molech then they might get some negativity out of the game. Some gamers, though, believe that there is a separation of church and state in the board gaming world, and religion of any kind should never appear in any game.

Overall, the reaction has been largely positive and I have been very thankful for it.

Originally I created Kings of Israel as a way to teach geography to my teen Bible study group. I tried to incorporate Biblical games in my studies before I created Kings of Israel but all my options seemed to either be lacking in fun, or the theme was mostly painted on a good game and had nothing I could teach with it. So I created Kings of Israel to be a useful teaching tool for anyone that might be interested. There is a lot of geography involved in the game map, the names of the kings could be picked up pretty easily, and the events that occur are all Old Testament events so there are multiple things that could be taught.

For the final version of Kings of Israel I have created two sets of rules: One for normal gaming and one for large groups in a Bible study setting. Basically, the Bible study rulebook is the normal game somewhat simplified and made for simultaneous play. That rulebook takes out the events in the game and allows the players to play with their hands face up. Teams are divided up based on the number of students, so if there are twelve students then there would be three games of four players going on at once. The leader controls the Location deck where evil appears so each group is facing the same problems but how they react to them will be different. In the end, whatever team is the first to build all of their altars wins.

The Bible study version plays quicker and is easier for people to pick up the game. This quicker version allows the leader to run a related Bible study in-between rounds, and if enough games are played then the group can move up to the normal game. I should say though, that the Bible study version can be quite difficult too if played with the variants included in the rulebook.

Have you used Kickstarter for any of your projects?

Kings of Israel was my first Kickstarter project. The funding goal was set at $9500, at that level I calculated that I could afford to cover the rest of the manufacturing costs and produce the game. In the end, Kings of Israel broke $32,000 with about 450 backers. It was a very exciting roller coaster and I was very happy with the final result. I have never checked a single webpage so often in one month’s time!

When can we expect Kings of Israel to be available?

Kings of Israel is currently in pre-production through Panda Manufacturing, which means that we are verifying art files for printing at the moment. If things go smoothly we are looking for Kings of Israel to be available to order in July or August.

Do you have any other projects you are working on that you’d like to mention?

Based on the support I have received from Kings of Israel, I decided to proceed with a couple other board game designs that I have been working on. The next game likely to be produced by Funhill Games is called, “Home Builders”. It is a tile laying game that has each player in a different neighborhood trying to build the most expensive house possible. The game plays quick, usually under thirty minutes, and up to eight players can play at the same time. Blind playtesting and art production are commencing as we speak, and I hope to run a Kickstarter campaign for it in February.

It sounds very interesting, and I’m looking forward to checking both Kings of Israel and Home Builders when they both come out.  It’s good to see new ideas coming from small publishers, and I have to say that Kings of Israel sounds unique.