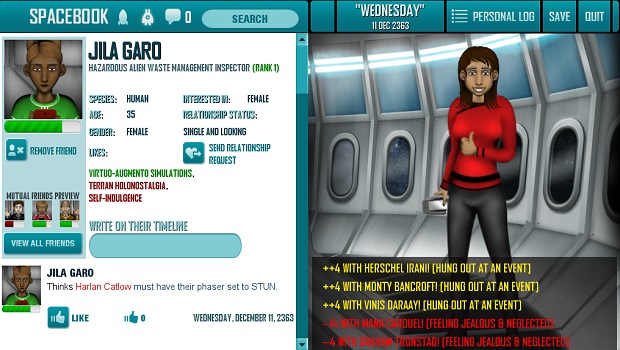 I have just enough time to update my SpaceBook status before heading out to work. Thanks to hard work and a healthy amount of schmoozing, I’ve recently been promoted to the role of Xenozoonotic Testing Subject. The job is taking a toll on my health, but it pays better than my previous gig. After work, I invite some co-workers out for a bite to eat at a local burger joint. The food is mediocre, but everyone seems to have a nice time discussing their common interests. It’s shaping up to be a pretty good day, until I arrive home to an unhappy message from my significant other who, along with much of the rest of my rapidly expanding social circle, is upset that they weren’t invited. It could be worse though; I could be one of the Redshirts who died in last week’s away mission.

Developed by The Tiniest Shark founder Mitu Khandaker, Redshirt is comedy social network simulation/strategy game packed full of sci-fi references. Soon after starting the game, you’ll receive a cryptic message warning of some event taking place in 180 days. The messenger doesn’t know what the big event will be, but it’s troubling enough that senior employees are being advised to plan their annual vacations for that date. Unfortunately, your lowly rank doesn’t qualify you for such generous job benefits.

[singlepic id=14583 w=320 h=240 float=left]Alas, there is still hope! The space station personnel are obsessed with the social network SpaceBook. With some well-timed friend requests and event invites, you may be able to charm and schmooze your way to a higher status among your shipmates and avoid whatever fate is set to befall the more disposable crewmembers. After selecting your character and creating a SpaceBook profile, you’ll be tasked with striking a comfortable balance between your health, happiness, social life, and career.

This is far easier said than done; using a game mechanic familiar to players of Facebook games in the real-world, Redshirt limits the number of actions you can perform per day. Trying to curry favor with your boss by inviting them out for a drink means you won’t have time to work on the actual skills you need for your next promotion. Flirting with the head honcho might still get you the job, but your coworkers will hate your brown-nosing guts for it.

[singlepic id=14582 w=320 h=240 float=right]Your SpaceBook activities are also included in the daily action limit. Do you “like” your best friend’s status update, or leave a romantic message (may I suggest: “I must be a meteorite, because I’ve fallen for you”) on your partner’s timeline? Either way, someone isn’t going to be happy. As you become more popular, it gets harder to make space in your social calendar for all of the friends who want your attention. Did you invite a few friends over for a poker night? Your coworkers are all very disappointed that they weren’t invited too. And don’t forget about that friend request from your boss. Do you want this promotion or not?

[singlepic id=14580 w=320 h=240 float=left]On top of the stress of managing your friends and career, you’ll also need to keep an eye on your finances. Most of the social events and job training courses cost money, along with the food you’ll need to buy on a daily basis if you want to keep your health up. Your emotional health is also at stake; as the saying goes on the space station, “All work and no play makes Gorg a sad droid.” If you fail to make enough time for social interaction and leisure activities, depression will set in and your job performance will suffer.

All of these elements and more combine to make a very unique and enjoyable gameplay experience. Even in its alpha version, Redshirt has an addictive “just one more turn” quality to it that makes it hard to put down. A few glitches here and there do little to mask that fact, and I have no doubt that the official release will be even more entertaining. More information about the game can be found at the official website here. Redshirt is set to be released for PC/Mac/Linux and iPad later this year. 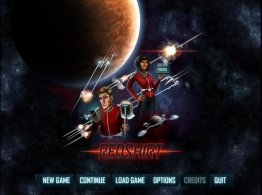 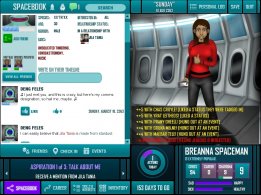 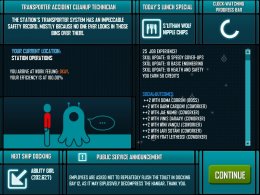 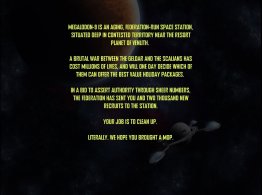 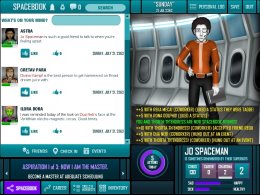 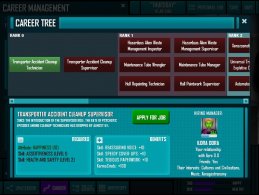 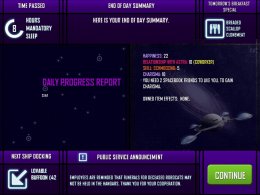